Dodge Master is a cool action game that will definitely appeal to fans of action movies and “The Matrix” in particular. If you have ever thought how cool it would be to be able to dodge any objects that fly in your direction. It doesn’t matter if it is a soccer or basketball, a rock, or even a bullet from a rifle. Stop dreaming, our main character from the application already knows how to do it. You can use his superpower to deal with all the criminals in the world. All the money that you take from drug lords, ordinary thieves and bank robbers go to you. This is the coolest action game that has appeared lately. All thanks to the unusual mechanics that the developers came up. The main character knows how to slow down time for a while, which is why he manages to elude shots of enemies. If you are interested in action games, then download also Zombie Frontier 3 and Dead Effect 2.

Dodge Master is a mobile arcade game in runner format and a primitive shooter from the American studio Zynga from San Francisco. They released this cool time killer on iOS devices in December 2020, and owners of Android devices got the opportunity to play it in February 2021. Very short game stages make the game convenient for relaxing in short breaks.

Main character in Dodge Master is very mobile and plastic. The laws of gravity do not affect him, as he can literally hang in the air without touching any surface. Such an approach reminds the movements of heroes in cult movie “The Matrix”. The picture clearly shows the trajectory of bullets fired by opponents. Dangerous, life-threatening lines are colored red. 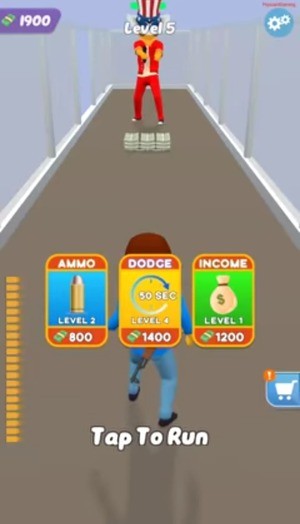 How to act during the battle: move limbs (arms/legs), head and body by tap on the marks that appear at these points (six points of movement are available). Therefore, the bullets (arrows, knives, etc.) will fly past the robber. In case of a successful change in body position, the trajectory turns green.

Each level of Dodge Master must come down to victory over the opponent. It is important to learn how to resist them, repelling all attacks in time. The main complicating factor is that you will run under fire. We have to make every effort to dodge enemy shells. The enemies stole a lot of money and took innocent people hostage. Each of them has a number of significant differences that you definitely cannot confuse anyone. The main goal of each stage is to pick up the stolen money, as well as free all the hostages. Do not let your enemies aim, because this will definitely not play into your hands.

The main character can have the appearance of both a man and a woman. It depends on the selected or unlocked hero appearance. Characters (especially non-play ones) often do not have detailed drawing of faces, but for some reason there is a feeling of resemblance to Japanese yakuza. The character is firing back, during which he must eliminate all opponents.

There are many weapons in Dodge Master: firearms, cold, small arms. Note that the number of ammunition charges for weapons is limited. Its consumption is visible on vertical bar at the bottom at left edge of the screen. In-game currency allows increasing the number of cartridges/arrows.

Game actions take place in various locations: it can be a corridor/room in office building, bar or cafe, gym, stadium, some kind of shed or warehouse in the countryside, space next to a tent and car in the field. Opponents are not only militants dressed in strict suits, they can be girls from a support group, actors, cyclists, mercenaries, etc. Each subsequent level has greater difficulty, as the number of enemy squad increases. it is worth taking care of unlocking improvements for effective combat. 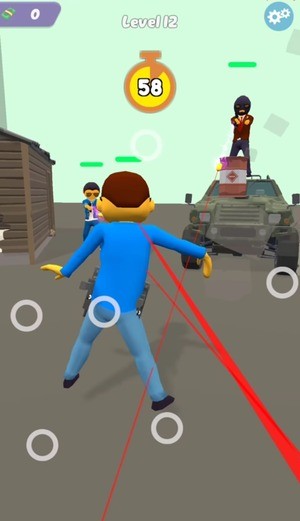 It is worth noting the rather nice 3D graphics in Dodge Master and interactive controls. You will be able to interact with literally all objects in locations and use them for your own purposes. There are a minimum of sound effects in the application.

We suggest you download Dodge Master with mod for unlimited amount of money. It can help you buy the best gear immediately and free.

Dodge Master is a classic arcade game. The whole plot consists ofa bunch of levels. Now, there are already over several hundred stages that you need to go through. However, the campaign is very dynamic. There are no same tasks, as well as locations. Goals and objectives, opponents and maps are constantly changing, which is very pleasant.

According to the standard rules, you cannot jump over the levels, so you have a systematic passage through all missions. The gameplay of Dodge Master is very unusual, which is exactly what we said about the mechanics. In general, developers decorated everything in a third-person view. You always see your hero, opponents and bullets, shells that fly at him. The opponents make the first move when shots are thundering, time freezes and the timer starts ticking. In 30 seconds, you should move parts of the body and dodge all bullets. If you cannot, then the character dies accordingly and mission starts again. 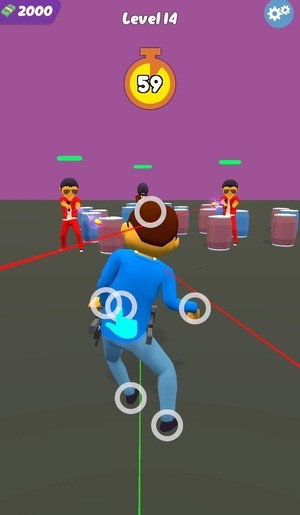 If everything goes as it should, then it is your turn, you must aim and shoot at the enemies. You have limited ammunition. When hero runs out of ammo, the enemies shoot again, while ammunition replenishes and so on until they all die. Above the head of each opponent is a stock of his health, so you can track how much HP is left.

You can also use the tools at hand in Dodge Master to cause damage. They are not always there, but often you can find cans, barrels of fuel and stocks of weapons in locations. After hitting them, you will cause a powerful explosion that can kill everyone at once.

Dodge Master is a very unusual game that is not easy to break away. You will be able to control any movement of the character. It is necessary to dodge dangerous weapons. Whether you can handle it or not, you can only find out after downloading the application to your smartphone.