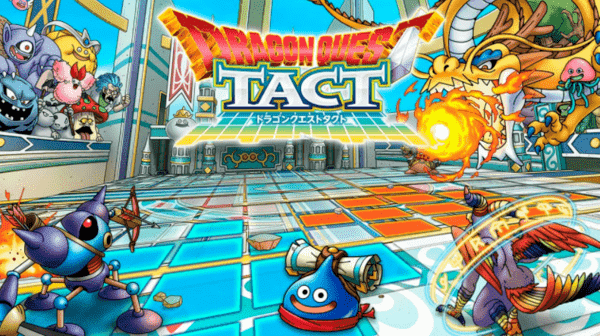 Tactical battles from Dragon quest series managed to conquer hearts of fans of combat battles with a captivating storyline. Now, series increased its number with another representative of this genre. DRAGON QUEST TACT is one of the newest games from Japanese company Square Enix, released on July 16, 2020 and available on both Android and iOS devices. As with other games in the series, there are four languages ​​to choose from, with English being the most common. The game got a rank among the best RPGs in Google Play Store with an average game rating of 4.5. If you prefer this type of games, we can also recommend you Harry Potter: Hogwarts Mystery and Tintin Match.

Dating back to the eighties, Dragon Quest series are recognizable for its style and graphics, but DRAGON QUEST TACT has gained great popularity due to its awesome plot.

Create your team of monsters

Battles represent a chessboard-like field. Fighting monsters opens up new possibilities. Purpose of such battles is to assemble a team of monsters ready to fight against opponents. Each of the monsters has its own skill and rarity level. The game features both the simplest slimes and the rarest orcs and golems. Collect monsters, increase your level, upgrade monsters to the maximum level and choose them for final fight against the Dark Lord.

DRAGON QUEST TACT amazes with its graphics and art. Nevertheless, main object for admiration is monsters striking with their uniqueness. Character variability in the game starts from simple blue slugs with a funny teardrop-shaped body and ends with a powerful bird-like monster with bright wings and a strong beak. Game plot also introduces interesting creatures, which features players still have to learn. By gathering certain ranks of monsters family, it is possible to upgrade each character to the maximum scale and make sure that Dark Lord will pay for his actions.

Perhaps the games from the Dragon quest series are the most interesting of all other RPG battles. There is no character control here, as is often the case in shooters and other kinds of battles. Main essence of DRAGON QUEST TACT comes down to player logical thinking, which can either lead to victory or ensure defeat. After all, battlefield is somewhat reminiscent of chessboard, while heroes on it are chess pieces. Only participants of every fight can influence the outcome.

A joyful and playful melody plays in the menu, which sounds not only in main tab, but also in other ones. All moments of story mode feature music, as the battle itself. Corresponding sound follows by pressing any of the buttons, while the entire battlefield can guarantee you clang of weapons and furious screams of new monsters.

DRAGON QUEST TACT graphics deserve special attention: Japanese artists got confused with drawing of monster characters and overall location style. The entire series of games have the same type of graphics, so there is no something new for players of previous versions. Vibrant colors add a dramatic epic ambiance and instantly immersive gameplay.

For every day playing the game, you can get a lot of bonuses and a good fortune. By receiving usual 3000 gems every day, it is impossible to collect the required sum to upgrade your heroes correctly. Anyway, you have to repeat some levels in order to earn more. Even the most important mission in DRAGON QUEST TACT cannot bring you the necessary amount of funds to buy needed equipment and weapons.

In order to facilitate the game process, our website users have an opportunity to get an unlimited number of gems using our money mod. It not only makes the game easier, but also eliminates tricky moments when the game is impossible to complete without the required amount of funds.

Our team has checked DRAGON QUEST TACT and its mod to confirm its full functionality. We guarantee that after the first launch you can get almost endless amount of supplies enough for upgrading your heroes and buying new equipment. In addition, we also can confirm overall safety of installation file as we check it with antivirus apps on different types of malware. Just use our recommendations below and enjoy unlocked gameplay.

The beginning of DRAGON QUEST TACT tells players an interesting story about Dark Lord, who recently left his powers, but now want to become the main problem again. The story goes that the Dark Lord may once again take over control of the world. However, young knight, whose name you can choose on your own at the very beginning, don’t want to allow this. Now, you have to embark on a war with hated monsters and overcome the forces of evil. For this, it is necessary to go through interesting levels with puzzle elements repeatedly. Every victory gives the knight not only new allies, but also objects and materials for improving and developing skills.

It is also worth noting that the game requires a constant internet connection and a sufficient amount of space on Android device.

Embark on a vivid and unforgettable adventure to save famous universe from Dark Lord in DRAGON QUEST TACT. Gather allies and defeat monsters as you move closer to defeat the forces of evil.