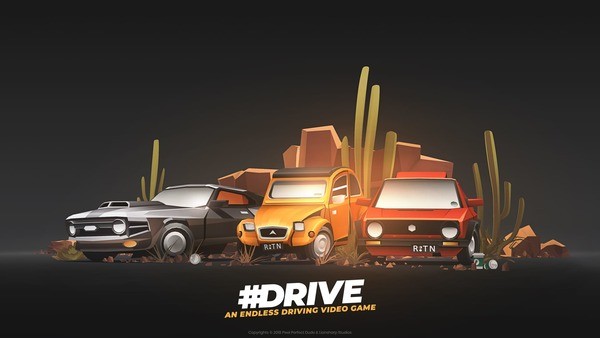 #DRIVE is an arcade race, stylized as movies of the 70s of last century. Drive a racing car, considered sporty chic 50 years ago . Vehicle differ not only in appearance, but also in technical characteristics, which makes the game especially exciting. It doesn’t allow to break away from the process and task that creators set for the player. There are no rules here, you just need to choose the road, jump into the car and go! #DRIVE is driving for the sake of driving, although you still have to achieve something. If you love games about cars, then our team has prepared MadOut2 BigCityOnline  and Top Drives – Car Cards Racing especially for you

Pixel Perfect Dude released #DRIVE in early spring 2019. Year later, the game has more than 5 million download all over the world. The average user rating is 4.4 out of 5.

We decided to drive. What about you?

The creators of #DRIVE describe its tasks and goals as a continuous road drive. They suggest not paying attention to trip purpose, movement speed and style of driving. The main thing for developers is to drive and invite players to join! However, it is still a game, so you need to complete some goals in order to capture attention of gamers. For example, you need to collect useful items and in-game money while following the route of selected location. In addition, player chooses locations or roads himself. The same applies to the car, as you can choose it. The game has options for sports cars for the most demanding taste.

This is how we can characterize the main gameplay. The player have to not only drive car, but also collect bonuses. Quality of improvements that the player can afford depends on their price. Another difficult task that the player faces is to get away from the police. At the same time, it is not at all clear whether there was any traffic violation – this is not important. There are no warning signs and traffic rules just don’t exist. Chase process itself fascinates and excites at the same time.

Despite the fact that #DRIVE emphasis comes down racing on semi-desert roads with obstacles, your car still needs fuel. Just drive into the city, where you can not only replenish the fuel supply, but also go to the auto repair shop. Moreover, you can change the appearance and improve some of the vehicle insides. By the way, you can even buy a new car. In this case, you have to start the improvement process from scratch.

#DRIVE is a stylized action game about chases on cool sports cars, hence the specific graphics. Everything has good rendering. Sketches of the locations are beautiful, cars are amazing and special effects are wonderful. The developers have taken care of high-quality animation effects. The gameplay looks quite realistic and driving.

The sound design corresponds to the declared style. Game soundtrack invigorates and further spurs to movement. There are original sounds accompanying certain actions that don’t cause irritation, but only complement the gameplay.

#DRIVE has a huge number of things to spend money on, but funds are always not enough. This is why we offer you to download version of the game with a mod for unlimited money. It allows you to implement the player’s plans quickly to improve the car and enjoy #DRIVE as much as possible.

We have tested the game for our valued users. After testing, we can confirm correct operation of mod for unlimited money. Immediately after entering the game, you get almost unlimited amount of money on your account. Thus, you can immediately choose any car you like from several classes, unlock almost any track and improve your car to the maximum. Don’t worry, installation file is virus-free. You can play without risking being banned.

#DRIVE gameplay is dynamic and forces the player to demonstrate reaction and attentiveness. Our testers said that driving the car is quite difficult. This is not because the car has no steep racing characteristics, but because it is much more interesting and realistic to drive a poorly controlled car. By the way, no one canceled the drift! We should also mention the gradually increasing complexity as one the game feature.  With its help, you can easily get used to both car and its control.

#DRIVE offers fans of old sports cars not only to drive them, but also to try to improve them in a modern manner. Just make systematic improvements in properties and characteristics of selected car. In addition, the gameplay involves receiving game money that you can spend for vehicle improvement.

#DRIVE is a unique racing game that has its own style, frantic dynamics and original graphics. The game delights not only racing enthusiasts, but also those who want to get a closer look at the automotive culture of the 1970s.

How to install #DRIVE Mod?

We made everything to ease downloading process for every visitor of our website. However, if you download modded or hacked game from third party sources for a first time, the following how-to-do guide will be useful for you:

Don’t forget to delete the original version of #DRIVE before installing our modified version to prevent errors during installation process.