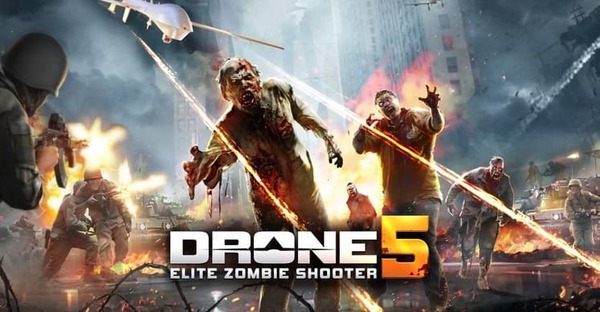 Drone 5: Elite Zombie Shooter – bomb and shoot ships, helicopters, tanks and other enemy vehicles. Go on combat missions around the globe, so protect your base from attacks, escort important cargo and arrange surprise attacks on enemy shelters. The battles take place under a variety of conditions. For example, battles in bad weather making it difficult to see or it will simply be dark. Control a variety of unmanned vehicles and equip them with modern weapons such as homing missiles, powerful bombs and more. This action contains at least 70 missions in the campaign mode and no less interesting online battles. If you like action games, then download also Survival: Fire Battlegrounds 2 and The Doomsland: Survivors.

Here is a cool and unique game where you can take control of a hyper-speed and combat drone. However, if you want to know as much as possible about this project, then you should read our review.

Drone 5: Elite Zombie Shooter Mod APK consists of dozens of levels. On each of them, you have to shoot at enemy installations, warehouses, and terrorists accurately. You have to start by going through simple levels where you need to destroy a cluster of infantry, then rocket launchers and, ultimately, large artillery.

The most interesting thing is the construction of levels. They are not monotonous, as for example, enemies can attack you, launch rockets, and do everything to destroy a convoy with food and equipment. You have to protect the military, shooting enemies from a bird’s eye view.

If you complete all the tasks of Drone 5: Elite Zombie Shooter on a level, you will receive money to spend on upgrading the drone and installing new weapons. The controls are swipes and taps on the buttons on the screen. Aim, wait for the right moment and shoot enemies. The gameplay has not changed much compared to the previous parts. New locations and difficult tasks have appeared but in general, the fifth part has become an excellent continuation of the series.

The main weapons in Drone 5: Elite Zombie Shooter are a machine gun and a rocket launcher. Machine gun is capable of inflicting huge damage in a small area, hitting opponents pointwise. Missiles can destroy helicopters, installations and ground vehicles. It’s worth noting that the reload time can hurt you, so use your ammo wisely.

This game is unique in that it successfully combines a very dynamic gameplay, along with tactical actions. Therefore, in addition to shooting and movement skills, it will not be superfluous to demonstrate your intellectual abilities.

We recommend you to download the Drone 5: Elite Zombie Shooter mod APK for unlimited money to make your drone even more dangerous and deadly. 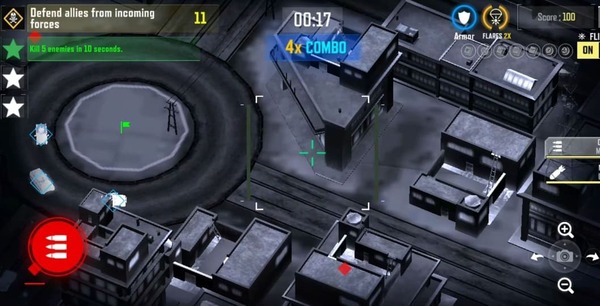 Become a real heavenly punishment for your enemies and a guardian angel for your allies. You have to control an unmanned drone, on board of which there is only new and modern equipment to destroy the enemy. Drone 5: Elite Zombie Shooter Mod APK offers you to look at the ground with a camera that sees several different spectra at once. See through a normal zoom camera or through infrared to see your enemies in the fog of war.

Choose the type of weapon you need and point it at the enemy. It is very important to remember that you are on a mission, so do not shoot anywhere.

A fun and unusual game that allows you to soar high above the ground and deal a crushing blow to enemy forces. Use many different guns, from an ordinary machine gun to a real carpet bomb. This weapon is capable of destroying huge enemy forces. Upgrade your drone and use different modes to see at night. Complete the task perfectly and get rewards for it, become the best pilot of the air fortress and win this war.

Drone 5: Elite Zombie Shooter is an exciting game about controlling a powerful drone. Choose targets and hit them. Complete many missions, help your allies and don’t forget to unlock new weapon mods.