Dude Theft Wars is a multifaceted action game in which you play the role of a criminal element holding the entire city in fear. It has a very funny angular cartoon graphics and the gameplay is similar to the famous GTA. Grand Theft Auto is a cult game as it has an open world and tons of possibilities. Here you can do everything: steal cars, rob, frighten passers-by and complete exciting missions. The most interesting thing is multiplayer with hundreds of other players. Project differs from many mobile games in a large open world, where many all kinds of adventures await the player. In addition, there is an opportunity to become a member of one of the most influential mafia groups. We recommend downloading DRAGON BALL LEGENDS and Clan N for fans of action games.

Gamers from all over the world has already appreciated the project. Number of downloads has exceeded 50 million. Join you too!

The most important gameplay feature of Dude Theft Wars is the open world, which represents the main character’s hometown. It is worth mentioning right away that it is not an empty city with narrow streets between houses. Immerse yourself in whole sandbox full of various activities. A sharp turn in life will find the main character Jack in his home, where he lived his entire boring life. This is where any plot ends and the city opens all its doors for you. 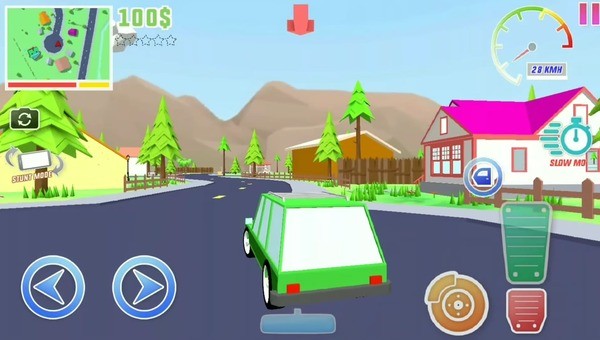 You can drive around the city and look at landscapes, take money from residents and buy weapons. Have fun in the amusement park and eat fast food in eateries, fight the police and organize a criminal gang. There are tons of possibilities here, each of which is definitely worth exploring. Passers-by will react to your actions by responding to you with a friendly greeting or by running away from you without looking back.

Variety of cars and arsenal of weapons

Transport deserves special attention in Dude Theft Wars. Here you will not see prototypes of real cars, but the car models look very realistic. You will need steering, gas and brake buttons to control. In addition, you can fly on helicopter on which you observe the city from a bird’s eye view. Find bicycles and skateboards on the sports fields. You will be able to ride them not only on the site, but also throughout the city.

To commit crimes, you need a weapon, since your hand-to-hand combat is clearly not enough to confront the police. You can see special weapons stores on the map that will surprise you with their arsenal. Here you can use assault rifles, submachine guns, and even a huge revolver that will knock your enemies back a few meters. Over time, you will be able to afford explosives or rocket launcher, which can help you to wreak havoc and devastation in this city.

Jack’s smartphone is also an important part of Dude Theft Wars. Here you can order a vehicle, view the map, take a selfie and much more. Selfies are saved to your device, which allows you to show off your character to your friends on social networks. You can also order other interesting services on your phone, which you will already learn about in game course. In general, smartphone role here is similar to that of the device from the GTA series. If you have played, then you will understand what we are talking. 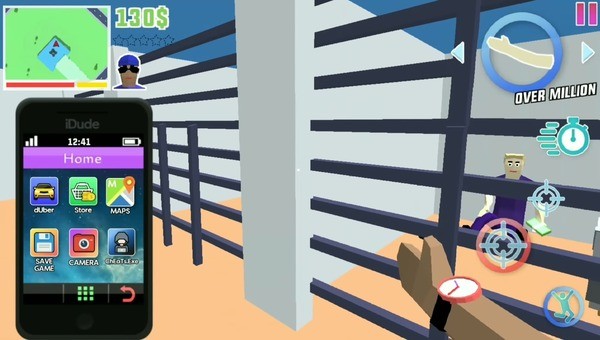 It is especially fun to play Dude Theft Wars with friends or just in multiplayer mode. The criminal or peaceful future of hero is completely in your hands! The events take place in a large picturesque city, so explore it. Choose which side you take – protect civilians from bandits or become a thunderstorm of city streets yourself. Doing this together with hundreds of the same players, where each plays his own role is much more interesting.

The graphics of Dude Theft Wars features a cartoon-pixel style, so the eyes will not get tired of the local landscapes. Developers made everything with sufficient quality and concisely. Detailing and drawing has the highest level, as well as effects of explosions and shots. Presence of good and high-quality soundtrack will fully immerse you in process of what is happening on the screen.

All paid services are available on your mobile phone. Shopping and entertainment in the city costs a certain amount of money. You can earn in-game currency on your own, but this process is long and exhausting. That is why we suggest you to download a mod for unlimited money, which only increase as you spend.

Alas, you cannot become a gangster in Dude Theft Wars right away. First, you need to earn a reputation and start-up capital. Robberies of houses, grocers, clothing stores and other establishments can help you with this. The robbery process happens quite naturally: you come to the store, rob it and then the police sit on your tail. As in the best traditions of the genre, the police wanted indicator has a form of stars, which number indicates severity of your crime. Robbing shops is very profitable, but it may not seem so interesting. One more way is murder and robbery of people who carelessly walk the streets of the city. 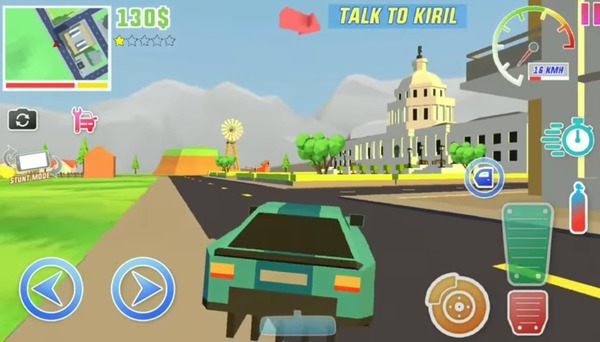 After you earn the proper level of reputation in the world of crime, you can join a gang. This opportunity promises you massive shootouts, showdowns with other gangs and other interesting opportunities.

Another important feature that Dude Theft Wars has to offer you is car driving. The car park here features not only by classic racing cars, but also by huge jeeps, ATVs and trucks. Here you can steal a car or call it using a special application on protagonist’s mobile phone – “dUber”. The service provides you with cars of any model presented in the game. You will not be limited to one ride here, as the city is full of various jumps and ramps where you can do various tricks.

The best way to relax after a hard day, especially if you love games like GTA, is the amazing Dude Theft Wars. This game is in beta stage, but has already won an army of fans thanks to its addicting gameplay and fun graphics. Well, its main advantage is an open world with complete freedom of action.