Empire Warriors: Tower Defense is an addicting game that will take players to a world where many races live together. Until the trouble happened, because of what now you must defend your inhabitants from the most evil invaders. Take command of the army and do whatever it takes to defeat the enemy and bring peace back. Your task is as follows – place defense towers on the enemy’s path so that they destroy them one by one. Get monetary rewards for this and pump towers, increasing their level and attack, respectively, in order to overcome even stronger enemies. Level by level, you will improve your tactical skills by installing unique towers that have different abilities. Earn rewards that allow you to rise to the top of the best players around the world. Also, download The Tower: Idle Tower Defense and Kingdom Clash – Battle Sim.

Empire Warriors is a classic tower defense, but with some nuances. More details are in our review.

Initially, the player has four types of towers. The first is the barracks. After their installation, three soldiers appear near this structure, which attack everyone in zone of their activity. In the event of the death of one or more of them, a replenishment appears from the barracks in a few seconds. The second building is the archers’ tower. Everything is clear here. It is the weakest long-range defensive structure. 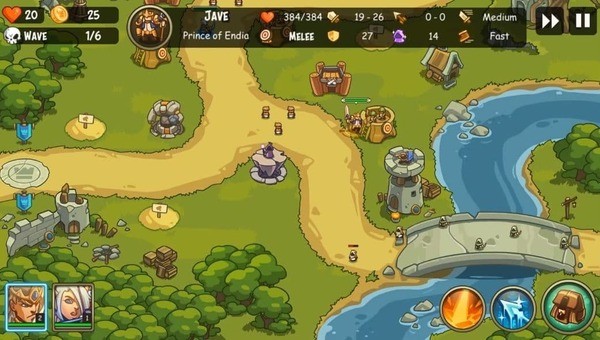 The magician’s tower is much more effective. Magical energy is capable of piercing any armor. However, some creatures are protected from magic or receive reduced damage from it. It is possible to destroy them with artillery. This is the most expensive and powerful tower. Shells from the cannon hit entire areas, which allows you to deal damage to several enemy units at once.

Several races – each with its own characteristics

In addition, the player can choose from five different races. Creators of Empire Warriors tried to differentiate as much as possible from each other, creating unique heroes, towers of different strength and characteristics, and unique special abilities. Play as orcs, humans, elves, dwarves and undead, passing both a single-player campaign and single missions at increased difficulty levels, as well as participate in online duels with other players.

To add variability, Empire Warriors also have active abilities. Use them directly during the match. For example, every ten seconds, you can call in reinforcements consisting of two militias. They are quite weak, but they can help in critical situations. There are also magic skills, for example, Meteor Shower. It deals great damage to an entire sector, but takes a very long time to recharge.

You receive stars during the walkthrough. This is a kind of passage assessment on the mission. The maximum for a mission you can get is three stars. In case it ended unsuccessfully, you can always replay any stage. Spend stars to buy upgrades to your skills. For example, you can increase the radius of fire on the archer’s tower. Increase the defense rate of soldiers from the barracks or choose any other skill for which there are enough points. Skills have several branches. Open abilities in each of them, one after the other.

The graphic shell of Empire Warriors features a funny cartoon style. Everything looks very nice and pleasant, which creates a pleasant atmosphere and cheers up. HD quality and top-down gameplay will allow you to monitor everything that happens in the location.

Empire Warriors are available not free, but for a nominal fee from official sources. If you do not want to pay, then we offer to download and install the project for free using our link. There is also a mod for free shopping in the game.

In this fascinating combination of TD strategy and popular RPG, the player travels to a distant continent filled with humans, elves in dense forests and dwarves in a mountain kingdom, as well as other fantastic creatures. 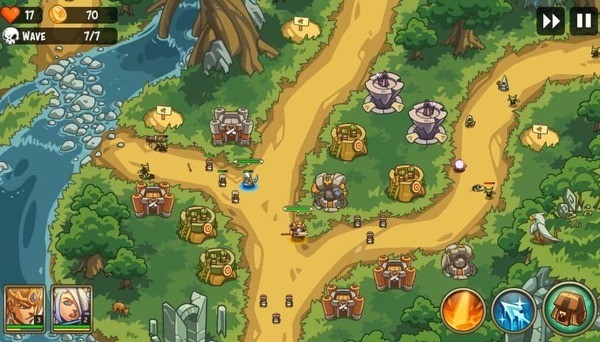 Gamers of Empire Warriors have access to captivating detailed maps of fantastic lands of different sizes. You must give a tough enough rebuff to the army of numerous enemies who go to his lands to take the population into slavery. Get help from special built defensive towers, which have special unique characteristics and are effective in the fight against advancing opponents.

This popular application allows you to play in single player or special multiplayer mode with your friends. Get into the gameplay and enjoy the exciting epic wars.

It depends only on you whether your heroes will become winners or losers. Empire Warriors: Tower Defense offer numerous monsters hungry for your blood, as well as dynamic gameplay in your favorite genre.