Epic Brawl – Royale Clash Game is an action game with strategy elements from the developers of AppOn Innovate. Fight in spectacular battles against artificial intelligence and real players. You control a brave hero who single-handedly attacks enemy fortresses. However, as you might guess, it is very difficult to stand alone, so his faithful allies come to the aid of the character. Hire soldiers and use special skills during the battles, using energy for it. Attack enemies and crush their units or fortresses. Upgrade your team and collect the most powerful deck to achieve the best effect in battles. To your attention more than 50 characters and more than three hundred exciting missions. If you are looking for interesting strategies, then also download SIEGE: Apocalypse and Warhammer AoS: Soul Arena. 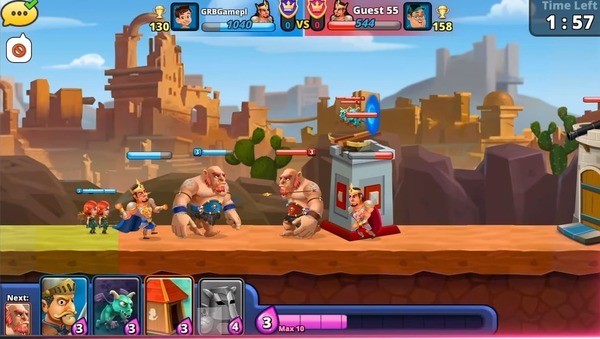 Epic Brawl is a new project from the developer, but the game is already rapidly gaining popularity. If you want to know more, then read our review carefully.

Each user of Epic Brawl – Royale Clash Game faces a choice: play in a single project or go into a multiplayer battle.

There are over 300 missions in the single player campaign. The essence of all of them is approximately the same. You must defeat the insidious enemies who launch waves of enemy units at you, as well as destroy their towers. To replenish the troops, hero has ten units of energy, as well as a strip with units and special skills. Each warrior requires a certain amount of energy. She will gradually recover. You just have to go forward and destroy everything in your path.

Multiplayer battle of Epic Brawl – Royale Clash Game behaves little differently, although the meaning is the same. You need to defeat the opponent’s base before he destroys yours. How you do this is entirely up to you, but remember that the amount of energy is limited and the enemy is constantly advancing.

Epic Brawl – Royale Clash Game is a card project. All fighters here are presented as cards. Each has its own cost in units of energy. Only units that you have unlocked or bought are available for your roster. Then they will appear in battle in random order. The same applies to special skills. For example, you can use a hail of arrows for three units of energy and cover the enemy tower with a blow. Therefore, it is extremely important to choose the right fighters, having collected both melee units and archers in the deck. Don’t forget the mages.

Another important part of Epic Brawl – Royale Clash Game is the upgrade of your characters. You will receive a variety of chests after each successful battle. They can contain coins, new units, as well as improvements to existing ones. For example, you can get +3 for your archers. This means that they will increase three levels at once and become stronger and longer-ranged. You can also improve skills, making them more destructive and massive. 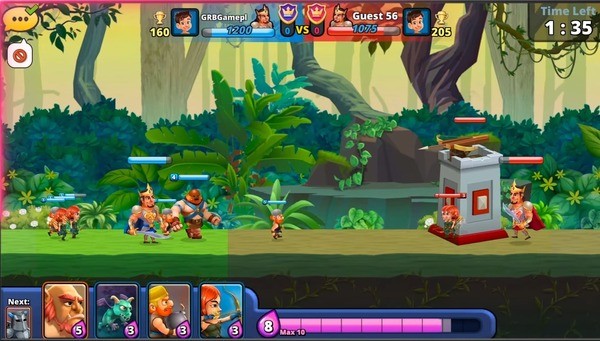 Special mention deserves the main character, which can not only be improved, but also dressed. Find the best equipment for him, increasing main hero indicators, as well as increase amount of his vitality.

The gameplay of Epic Brawl – Royale Clash Game focuses on gathering a powerful army under your command. Use it on the playing field to fight the enemy army. In order to win, you will not only have to collect powerful heroes, but also use unique abilities correctly in battle. Act according to pre-designed tactics or perform various maneuvers and rotations of heroes. Each of which is great for performing certain tasks, but in the rest loses to others. 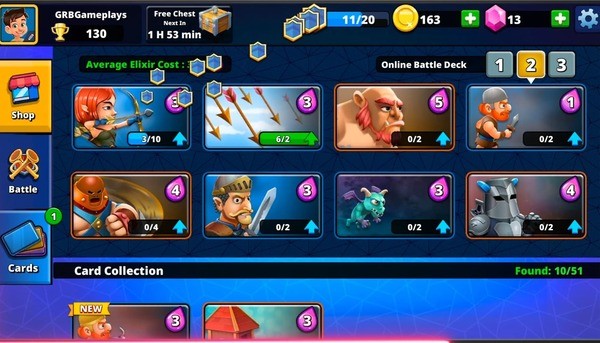 There are over a hundred workable builds for different heroes that will be useful in certain circumstances. Make twice as many builds if you experiment a little with army gathering and pumping heroes. Of course, this will not be possible without a good supply of in-game currency. All experiments require constant pumping of new heroes. Send them to rear and take completely new ones, pumping them from scratch. Therefore, it is very important to complete missions and weekly tasks, in which you can earn extra money.

Epic Brawl – Royale Clash Game is an exciting multiplayer game in which any user feels like a brave commander and conqueror. Gather your epic army and go on an unforgettable adventure.