Epic Heroes – Dinosaur Control is a role-playing game from the Dinosaur-Games studio. In fact, this project is quite casual. Here you have to help a group of fighters defeat opponents, collecting bonuses and dodging dangerous traps. In parallel, do not forget about the merger, as well as the pumping system. Here you have to manage crowds of characters, in which each of the fighters boasts smooth animations and realistic interaction with the environment. Physics and environmental objects that will surprise you with the same smooth movements. The game includes many levels, each of which has a unique set of traps, bonuses and groups of enemies. We can safely say that the gameplay revolves around bonuses, because without active interaction with them you will not be able to go through the initial stages. We also recommend that you download Dungeon Dogs and PIPE HEAD STORY.

If you are interested in the details, then read our review. 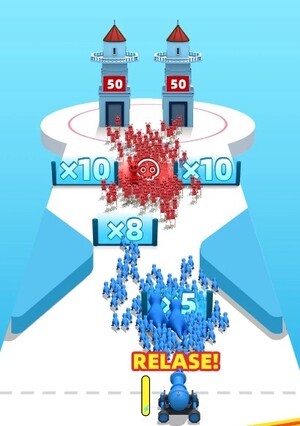 Go through relatively short levels, each of which will surprise you in the form of a unique set of traps and bonuses in Epic Heroes – Dinosaur Control. As you can already understand, the local gameplay focuses on increasing the number of your squad, since the outcome of the race will depend on this parameter. Each level here is a long track, at the end of which is an enemy castle. On the way to the castle, you will need to increase the number of fighters and save it, given the impressive number of dangerous areas. As traps, you meet moving mechanisms, a collision with which promises death for your soldiers. We talk here about rotating saws, pendulums, abysses and many other unpleasant objects.

Various springboards can help you bypass them, giving you the opportunity to jump over a dangerous area, buttons that raise a bridge over an abyss, and so on. Noteworthy are the local bonuses, which are represented by translucent gates. Each such object in Epic Heroes – Dinosaur Control, displays an arithmetic operation that players need to apply to the number of your squad. You need to analyze the number of your fighters.

With the money you earn, you will be able to carry out improvements, which here relate to the size of initial squad and income you receive. Pumping the first parameter can help you quickly recruit the number of fighters. Second parameter affects the amount of in-game currency that you earn for completing the stages. In the process of passing, you will also fill in the scale of prizes. Skins are the prizes here. You can increase the speed of filling this scale if you refer to advertising. Ads in Epic Heroes – Dinosaur Control can also multiply your income if you agree to view them after each individual level. 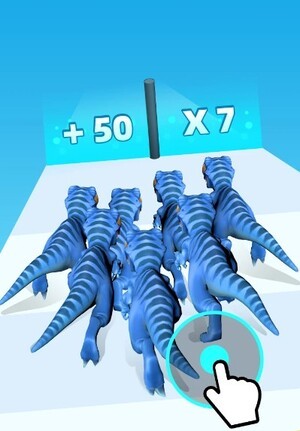 We recommend downloading the Epic Heroes – Dinosaur Control mod for an unlimited amount of money.

If you have always wanted to plunge into the process of passing a simple strategy runner with interesting mechanics, then you should definitely download Epic Heroes – Dinosaur Control. At the beginning of each level of the local campaign, you will have only a few fighters. It amount varies at each level. You have to go through a route that is quite full of objects on the way to the enemy’s castle. 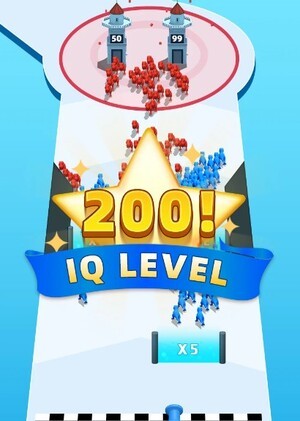 Strategy runners are one of the most popular toys at the moment. The thing is that such projects offer interesting concepts and mechanics. If you also want to play something similar, then download Epic Heroes – Dinosaur Control.