European War 7: Medieval is a great strategy game in a Medieval setting. Start the passage of the strategic campaign at the turn of history, when the Vikings invaded the mainland, bringing the collapse of Roman Empire and constant wars for territory break out on the European continent. The British, Franks and other peoples are gathering troops to attack their neighbor and you, the great commander. Participate in bloody battles, defending lands and conquering other nations.

Choose a scenario and start extracting materials and building the city, not forgetting to improve the barracks and unlock new types of fighters. Hire commanders and plunge into historical events such as invasion of the northerners, rise of Byzantium and many others. Become a legend in the general’s armor and rewrite history, taking part in not only the capture and destruction, but also mastering diplomacy. Download also Bid Wars 2: Pawn Shop and Random Dice: Wars.

European War 7: Medieval is another strategy from the developer EasyTech. If you are interested, then read our review. 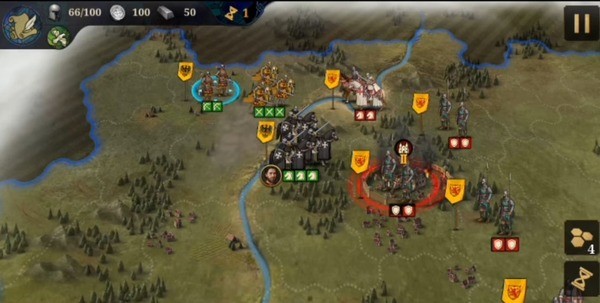 Fight for dominance in Europe

European War 7: Medieval is a new game from a series of cool strategies with an interesting storyline. This time, you have to take part in the war and try to do everything possible to win and not lose their entire army. Players take on the role of great commanders who will lead their army to victory and will do everything for this. It is necessary to come up with a good battle strategy, which in turn will allow you to outwit all rivals and begin to dominate the battlefield. Moreover, do not forget to gradually replenish the ranks of your army and hire more and more strong fighters. They will be ready to give their lives in order to defeat an opponent, which in turn can increase the chances of your victory.

The user of European War 7: Medieval will be able to try his hand at several large-scale battles at once, for different countries and factions. Fight on the side of the Vikings, try to conquer new lands for Byzantium or fight off the barbarian invasion. All military campaigns will take place in Europe, so the player will visit almost all the states of Middle Ages. Make alliances with other states to exchange provisions and troops. Explore new lands and join them to yourself. Hire helpers and advisers to achieve success. Complete missions and get special rewards. This game has an almost unlimited list of activities.

Each army should have its own commander in chief in European War 7: Medieval, which is quite logical. You will be able to choose among real-life personalities such as Genghis Khan, Barbarossa, Richard the Lionheart and others. Commanders have their own strengths and weaknesses, so it is important to choose the right hero wisely in order to succeed. In addition, choose from more than 10 countries available for the game. In total, you can get acquainted with more than 300 major armed formations. Choose among dozens of weapons, equipment and combat vehicles. The battles in this project are large-scale. You only need to properly manage the available resources and then inflict devastating damage on the enemy.

This game meets the user with a cool and well-designed graphic design, where you can watch everything that happens on the military map from above. The control interface in European War 7: Medieval is quite convenient and easy to learn.

Your first units in European War 7: Medieval will appear on the world map and will be waiting for orders. Give instructions to the heroes and start looking for a suitable territory to create a settlement. Alternatively, you can create a settlement right on the spot where the characters spawned. The choice is yours. Start extracting various resources and developing technologies, build various structures and develop your craft. Accumulate food and everything else so that the settlers give offspring to get new units. Send scouts to explore the area, find new resources and build new cities.

Advance in development over time through various eras and continue to take control of more and more territories. Also, do not forget to develop military affairs, because no one has canceled the protection of borders and various wars. Establish trade routes or declare war on neighboring empires, develop industry or invest everything in military affairs. You can choose any of the directions and soon you will find out whether you made the right choice or not.

If you were looking for a cool project with nice graphics that allow you to try your hand at developing your own empire, then we recommend that you pay attention to the new game from EasyTech studio.