Return to the Middle Ages with Evil Hunter Tycoon and find yourself in fierce struggle for power. The main character is one of the survivors in village. The Dark Lord, capturing the territory, did not spare it. However, locals were able to defend their settlement, while the Dark Lord retreated. Now, you have to protect the village and restore it after a fierce struggle with dark forces. In addition to restoring the destroyed lands, player needs to recruit fighters into army and fight evil forces. The city planner has to put an end to the darkness that has thickened over the human world. We suggest you download other simulators, such as Idle EcoClicker: Saving the Planet and Lumbercraft.

Evil Hunter Tycoon by Super Planet is a popular pixelated simulation game that is available to all Play Store users. More than one million users have already tried to save the world and about 60 thousand of them rated the application at 4.7 points.

From the very first minutes of the game, player opens the history of people who live on territory of village. Learns about the sad fate of settlers and their new hope – people who are able to rebuild the settlement after war. One of these city planners is the protagonist. The further the player progresses through levels in Evil Hunter Tycoon, the more he learns about the history of ruined town. 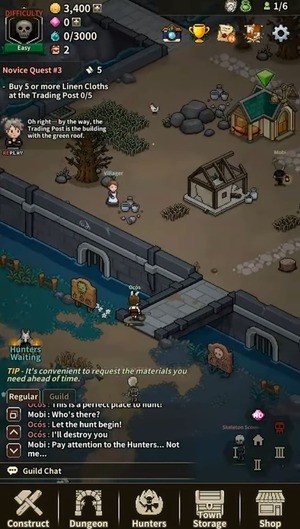 In order to gain experience and move through the levels, you have to go through a number of important quests. Each of them carries a historical meaning, so they are a kind of mandatory. Receive tasks related to interactions with settlers, creation of new buildings, restoration of destroyed city, as well as production of necessary materials. For convenience of players, developers highlighted all objects participating in quest in green. In addition, green arrow points to them.

Interactions with completely different characters are available for the player in the world of pixel art. This applies to both monsters and villagers. Each settler has a unique name and appearance that sets him apart from others. In addition to appearance, every player has his own purpose. Most of the characters in the settlement are hunters, while some are blacksmiths and vendors or other workers.

Evil Hunter Tycoon also has negative heroes – monsters who are located near the settlement in lands not recovered from the battle. These are zombies, goblins, trolls, werewolves, orcs, cyclops and even skeletons. Each character has its own characteristics, so battle with him will be different from the previous one. Every win over certain type of monster also brings completely different rewards. 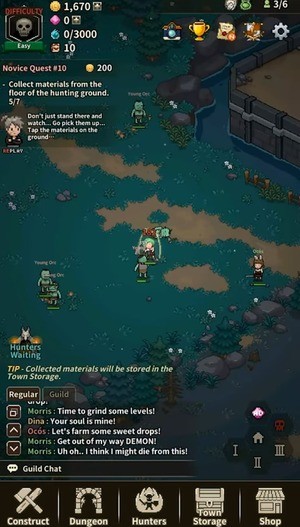 Simulator features pixel graphics, which is typical for many adventure simulators. There is a variety of lands distinguished by their uniqueness and beauty in Evil Hunter Tycoon. You can also find with different architecture on the territory of your settlement. The entire palette is dark, but it places accents on main heroes – people who can drive out darkness from the world of people. A pleasant melody plays against the gameplay background and fits description of peaceful village. Every action in the game is voiced. For example, communicating with villagers, raiding dungeons, fighting monsters, creating items, as well as movement of heroes.

In order to build new buildings, improve heroes and structures, you always need additional funds in form of gold coins. You can easily earn in-game currency by completing game quests. However, upgrades cost growth with each level, so you may face with situation where you have no free funds to complete village restoration. Stones and coins are getting harder to get, so some players spend real money on purchasing in-game currency. That is why we provide you with opportunity to download Evil Hunter Tycoon with mod for unlimited money.

We confirm that after launching Evil Hunter Tycoon mod, it is possible to get unlimited game currency – coins and rubies. Use acquired riches to improve buildings at your base, build new structures and upgrade heroes. We have already built mod into the game, so you only need to download and install it on your smartphone. If you suddenly have any problems with functionality of our solution, then do not forget to follow our updates in order to get the most up-to-date information. 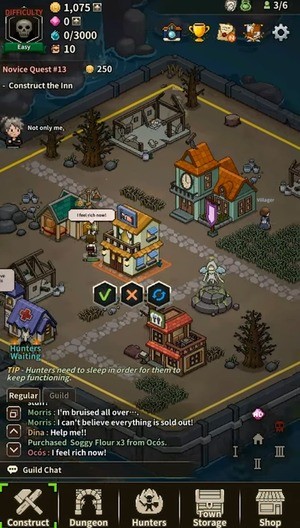 At the beginning of the game, you have to find out a sad story about attack of dark forces on territory of different settlements, which includes village of the protagonist. Now, city planner has to distribute responsibilities and build new buildings to restore the city. Such process requires coins, crystals and other gems, as well as a variety of materials that you can find in certain locations. The player always has a goal in form of various quests related to each other. All task objects (characters, buildings, locations) have green highlight, which helps in navigating the gameplay.

There is no control difficulties in Evil Hunter Tycoon, as main character performs the necessary actions himself. You just have to click on interactions with characters or cells in the lower menu. Bottom buttons include Build tab with all the buildings necessary for comfortable gameplay process There are also Dungeons where you can arrange raids and Hunters – a list with all hunters in the. Vault and Store are also available.

Evil Hunter Tycoon provides you with opportunity to try yourself in a role of real city planner and reclaim the lands shrouded in darkness. By defeating evil monsters and restoring the settlement, main hero will be able to return the light to this world.