Become a great hero in Evil Lands, fighting monsters, huge dragons and other bosses, but first, choose the right character class and go on quests to upgrade your hero. Travel through dangerous lands and team up with other players in this adventure. Destroy the evil creatures on the way or try the PvP combat mode to see which of you is strong. Spend time developing the hero, learn new skills and find better equipment to increase hero characteristics.

Become an invincible warrior who will crush any monster that gets in the way. The project has amazing console graphics, which clearly distinguishes the game from other multiplayer RPGs. There are several classes of heroes with unique skills, vast locations and a variety of missions, cooperative boss raids, real-time duels and much more. If you like role-playing projects, then also download Wolf Tales and Gladiators: Survival in Rome.

Read our review to understand what exactly Evil Lands has to offer you.

You find yourself in a world occupied by evil with one mission – free virtual lands. Becomes one of the valiant knights, bringing freedom and light to the tortured world. You have to fight with ordinary enemy forces and with powerful bosses. The warrior’s arsenal includes conventional weapons and magical powers. You need to fight the dead, vampires, werewolves, dragons, skeletons, spiders and incorporeal creatures. Pain and fear are unknown to them. Only by disassembling them into the smallest particles, you can cleanse the world from evil spirits. Do not forget about battles with other users, because the game also requires this.

First, you need to choose a class for your character, gender and appearance. Next, you find yourself in a large open world where you have to fight monsters that will often meet on your way. At the first start, the game prompts us to select the class of our hero and enter a name for him. There are only three classes available here: warrior, sorcerer and assassin. Fans of the genre have long known all their features and there is nothing new here. Separately, you have to devote time to pumping them, learning new skills. Found equipment adds skills and increases the parameters of the hero. In this case, only you decide which skills to upgrade in new levels.

Large selection of locations and quests

From Skylark Field to Broadcow Citadel, cross the ghost realm as you fulfill your ultimate destiny – fight against dark forces in the Evil Lands. Exciting quests make this role-playing game even more fun than other games in this genre! Players can explore different locations, along with magical forests. Here you can find resources, weapons, uniforms and other items to upgrade your character’s skills. Gaining experience and skills, you can become a serious problem for enemy forces.

By downloading Evil Lands, you get the opportunity to conduct research in two modes: single and corporate. In the first case, the player will encounter problems impossible to solve alone. It will be difficult to approach bosses with amazing power. The second mode provides an opportunity to join forces for successful combat operations against powerful monsters. There is the possibility of competitive action with other gamers. Show combat skills, abilities and talent in the conquest of the Lands of Evil in a competitive struggle.

The game has console-level graphics and wonderful sound effects that will definitely make you passionate.

If you want to get everything from the game, then we recommend you to download Evil Lands with mod menu, which allows you to get the following bonuses: Unlimited Points, as well as Dumb Enemy.

As soon as the hero appears on the map, the locals immediately begin to attack him with their requests. This is how your quests appear. They consist in battles with certain creatures, of which there are a lot around. You have to fight skeletons, orcs, and even defeat the Lich King himself. Moreover, the battle with the King is already the second quest. Completing tasks brings experience, which allows you to upgrade your character. Thanks to this pumping, you can unlock new skills and strengthen them further. This is a simple but effective pumping system. 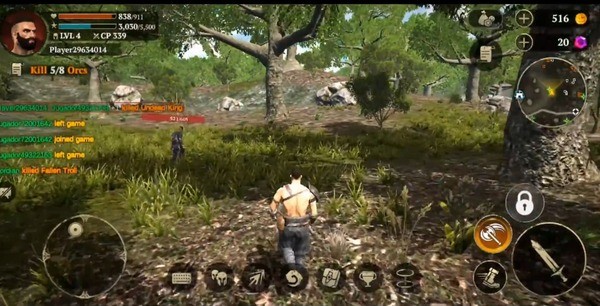 The combat system in Evil Lands has general style. There is nothing superfluous, but everything that you can expect is present. In addition to the main blow, several special moves require time to recharge. The presence of such shocks makes the fights not boring, but there is no showiness in the spirit of slashers.

In general, if it were not for some little things, Evil Lands would look like a standard regular MMO clone that flooded the mobile games market. However, these little things are there and you cannot get away from them. Thanks to simple tricks, the authors were able to clothe seemingly simple mechanics in a new form. As a result, a very nice game turned out.

Evil Lands is a high quality and very original action-RPG in the open world. You will meet other players, fight with them or go on joint tasks, go down to the dungeons and create guilds.