Farm Heroes Saga from the developers of King is an exciting casual arcade game in which you have to save the farm from the attacks of an evil raccoon and help the animals harvest vegetables and fruits. The app offers you a match-3 gameplay with fruits and vegetables used as cells. It is noteworthy that one cell can contain several types of fruits of the same type, so tasks are quite easy to complete. The difficulty depends on the goal of each mission. There are a lot of them, starting from collecting a certain number of points and ending with the destruction of the marked objects. By the way, you can use several heroes, each of which is especially good at collecting a certain type of fruit and vegetables. If you like match 3 games, then you can also download Decor Blast and Merge Decor: House design game.

Farm Heroes Saga is a fun puzzle game designed in the best tradition of match-3 games. If you have nothing to do, and epic fighting games and complex strategies are already tired, then you have found what you need. 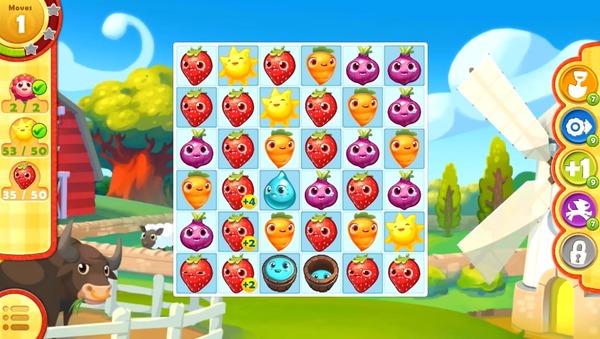 This exciting casual arcade game has a non-trivial plot. You have to save the farm from raccoon raids. This animal loves to harm and spoil the crop. Deprive him of this pleasure by successfully passing the levels of the puzzle. There are four levels in this game:

An important point of Farm Heroes Saga is the ability to make moves after completing the main task. Thanks to Super Mode, you can earn extra points and transform them into stars.

Move to the playing field after completing the next level. If you have played children’s board games, you will immediately understand what is going on. The map has a similar interface. A path with circles of levels stretches along the farm. Paint those that you have passed in one color and those that are yet to be in another. Indicate the most difficult stages by image of a raccoon, fox or bull. It is not always possible to pass them the first time.

Use power-ups to complete all levels

A variety of bonuses, widely presented in this game, can help you pass the next level of Farm Heroes Saga. You must use recharge to be able to use the booster. The more parts you have in your combination, the higher the chance of getting a useful bonus. In general, these are standard boosters: a rocket, a bomb, a hammer, and so on. They destroy either a certain color of objects, or a large number of them at once. Also pay attention to the numbers that mark the figures – they indicate an increase in the number of chips. For example, if the number one is on a carrot, then you will receive two carrots for destroying it. 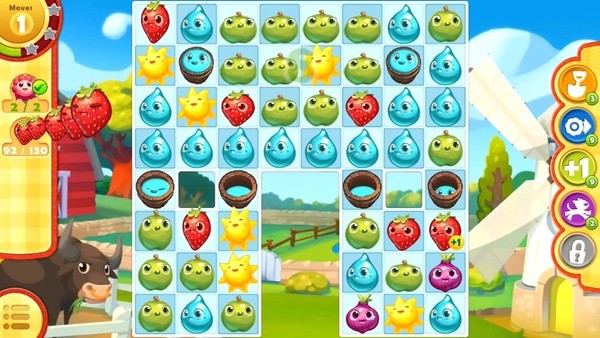 Colorful graphics, funny soundtrack and the most understandable gameplay await you in Farm Heroes Saga.

Download Farm Heroes Saga mod for many moves to complete all levels without difficulty.

The main goal is to complete all the levels available at a given time. As soon as one of the players reaches and copes with the final level, the developers immediately release an update. Developers add new levels and rework old ones, eliminating bugs and errors. Currently, Farm Heroes Saga has more than a thousand unique levels, some of which use slightly different ways of passing: 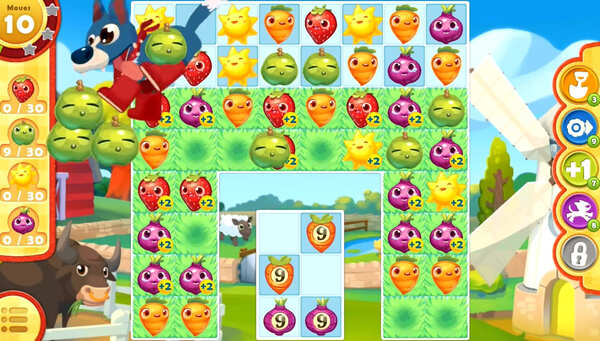 The game even has a simple plot that tells about the cunning raccoon Racine, who decided to steal all the seeds from the farm in order to ruin its inhabitants. Charming beasts in sorrow – farm can easily go bankrupt through the efforts of the insidious enemy. You have to stop the raccoon and make the farm a prosperous and profitable enterprise.

Everyone who loves challenging puzzle games should download Farm Heroes Saga. It allows you to have fun and usefully spend time. Develop your reaction, movement accuracy and brain speed with this game.