FINAL FANTASY VIII Remastered is a re-release of popular role-playing game for Android. Original game saw the world in 1999 on Playstation platform. The gameplay consists of exploring a three-dimensional map of the world, two-dimensional locations and three-dimensional battles with opponents in turn-based battles. You can move around the world on both foot and using various vehicles. History of the project is dedicated to a world that is similar to ours, but has elements of science fiction. Take control of military academy cadet Squall Leonhart, who, together with a team of friends, must stop a threat from another time. As in the previous parts of the series, a large part of the plot is devoted to development of characters and their relationships. Among other RPGs, we recommend Brave Dungeon: Immortal Legend and Eternium.

The FINAL FANTASY series are one of the most popular among many RPG fans. Now we will tell you about the main features of the eighth part remaster.

Twenty years have passed since the release of FINAL FANTASY VIII. Therefore we have no doubts that remaster required some improvements. The game has both graphical changes and some innovations in the gameplay. Find out more below:

Plot in FINAL FANTASY VIII Remastered invites you to take part in an international conflict, join the ranks of elite soldiers and get your first personal contract. In parallel, we open new heroes and reveal some of the world features. The line about school of mercenaries and confrontation between states ends at about half of the game. Further, narration becomes more fantasy, as explanations of what is happening do not always seem logical. The project has many unexpected twists and turns and epic battles that famously twist the story. The contrast between the first and second halves serves as a good tool for revealing characters.

The heroes of FINAL FANTASY VIII Remastered have well-written characteristics and fighting skills that are closely intertwined with backstory. There are six people in the team with own nuances and interests. However, it is necessary to upgrade not only characters, but also special monsters – guards equipped by fighters. Having taken possession of mythological creature, you not only get the opportunity to summon it during the battle, but also open a slot for improving abilities. Depending on the beast, these indicators may change. For example, Ifrit opens up the opportunity for its owner to improve strength, and Quetzalcoatl – the amount of vital energy. It is necessary to fill slots for creatures with magic. Magic has a scientific basis in the game world, so you do not need mana to use it. 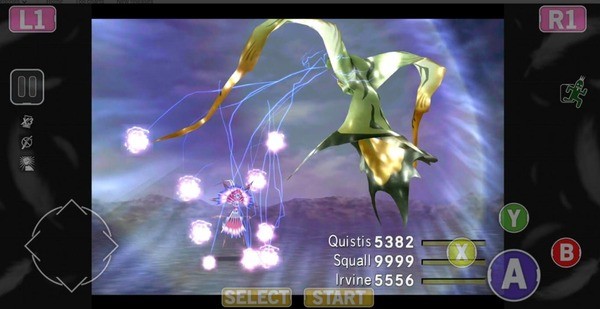 We have already mentioned graphics and changes compared to the original version, so let’s focus on the soundtrack. First, it is beautiful. Nobuo Uematsu has written great tracks that are great even when listening separately from the game. Especially orchestra version of the soundtrack. Some elements and harmonies in compositions are reminiscent of classics, like Richard Wagner and Nikolai Rimsky-Korsakov. However, the soundtrack remains distinctive and varied. Everyone can find something special. Epic battle marches give way to more lyrical tunes.

FINAL FANTASY VIII Remastered is a paid game on the Play Market, as its cost now is almost $17. It is a rather large amount, and many gamers have to deny pleasure of touching the classics due to lack of funds. However, you can now download our mod that provides you access to the game free. In order to do this, you just need to use the presented version.

We tested FINAL FANTASY VIII Remastered mod on our devices. Please note that the application takes up 2.5 gigabytes of memory on the device, so take care of this in advance. At the same time, project can boasts of high quality optimization, so owners of even not powerful devices can enjoy an epic adventure.

While finalizing the graphic component of the game, the developers made a number of changes in character design. Moreover, players unambiguously accepted not all of these changes:

In fact, it is difficult to judge the reason for these changes. Yes, Japanese games do not shy away from some frankness that modern publishers might find unacceptable. On the other hand, there are still quite a few characters left in the game with large cutouts and a frank appearance.

Fights are the highlight of FINAL FANTASY VIII Remastered, comparable only to the rich storyline. The game developers did everything to make battling process great in terms of graphics and gameplay standpoint. The battle takes place when a group of wandering heroes face bloodthirsty opponents. Alas, these opponents are not visible in advance. Their location is unknown in advance, because a random number generator works in some cases. Together with inability to survive at any favorite point, this factor greatly spoils life, but makes playthrough more difficult and interesting.

If you missed the release of FINAL FANTASY VIII, now is the time to check out this great project. Updated graphics and simplified gameplay allow any player to join the classics. Well, if the adventures of Squall Leonhart are already familiar to you, you can refresh pleasant memories and look again at your favorite characters.