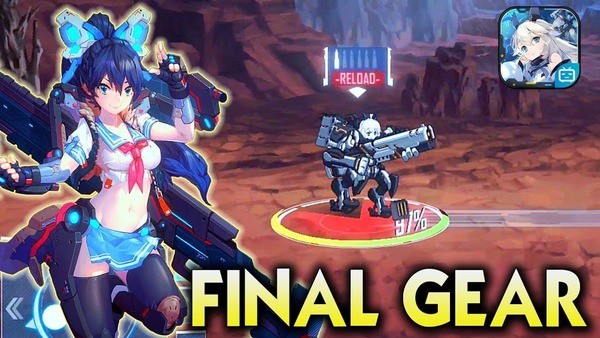 Final Gear is a project that mixes the mechanics of fighting, arcade, and RPG with collectibles. You will become the commander of a team of Battle Mechs to take pilot place of one of them! More precisely, to subdue the pilot and control his robot. This original game stands out against the background of similar projects and brings something new to the genre. If you have played the Street Fighter series of games, then you probably remember construction of its levels. You fight with opponents on a limited part of the location, and then, after clearing it, move to another part, where enemies attack you again. Final Gear has the same leveling system! Only mobs here attack in droves, and three heroes under the control of artificial intelligence help you. You can recruit your own assistants. Choose them according to the required skills, parameters of strength and specialization. Also download Undead World and BLEACH Brave Souls.

Final Gear project is only gaining popularity, but most of the positive reviews hint that the game will be popular.

Final Gear invites you to take part in battles on huge robots controlled by beautiful girls. The main future of the project is that it is necessary to collect each unit literally bit by bit. At the same time, it is possible to combine different parts of the unit to obtain new appearance each time. Each robot has a unique set of skills and they all vary in rarity. It is possible to carry out a special attack. Such super attacks have own time limits. Therefore, having used them once, you have to wait some time before recovering. In order for special attacks to be able to harm opponents, you need to improve your heroes very well.

Android pilots in Final Gear are hot girls who bravely follow you into battle. You can type several teams of four pilots. The anime girl you will see is for visual style only – each has different specializations and skills adapted for them. For example, there are tank pilots, bombers, gunners, mages, and so on. Based on their abilities, you need to recruit your team, as well as choose a strategy for the battle. It is logical, for example, to take different girls into your squad so that there is more variety in battle and more chances for positive success. Place the tank in front and cover it from behind with long-range attacks. Come up with your own tactics in battles with mobs and bosses – here only the user makes the choice.

Mix of several genres in one game

The gameplay of Final Gear is a mixture of several genres. Thanks to the dynamic combat system, the application resembles an isometric action game. At the stage of pumping robots, as well as improving pilots, players may think that it is RPG. Careful planning and tactical construction of mechs will lead to the idea that the project belongs to the strategy genre. Moreover, all of these statements are correct. We should also say that the game has full localization into English, three-dimensional graphics and simple controls. Perform all manipulations using a touchscreen. There is a virtual joystick to control the movement of units, as well as keys for active skills.

Final Gear stands out from its competitors with very beautiful graphics and incredible style, made like anime animation. All special skill animations look very nice and bright. You will be able to get real pleasure from the graphics in this project. The musical accompaniment is also worth mentioning. Developers selected it very competently and constantly supports the user in a fighting mood. After all, you cannot relax!

To conquer territories and win, Final Gear requires a very powerful army. You can level up for a long time, buy the best mechs and pilots and ultimately succeed. However, such a tactic takes a huge amount of time and it is possible that you will have to pay real money to get the necessary improvements. However, you can download a mod that gives you the ability to improve the attack and defense performance of your units, as well as get unlimited ammo and use skills without reloading.

At the very beginning, we have to choose a server for the game. By default, there is a suitable one, so you cannot bother much with the selection. Although the gameplay itself is clear and without any lengthy tutorials. You have several pilots, from which you must create an army, as well as robots. In total, the army can have up to four members. However, you can create several such teams. After that, go to the map, which is divided into stages. After choosing a stage, find yourself on the level, where, using a scanner, our pilot is looking for opponents or useful items. We click on the desired place, the ship moves there – and you start playing on the battlefield. 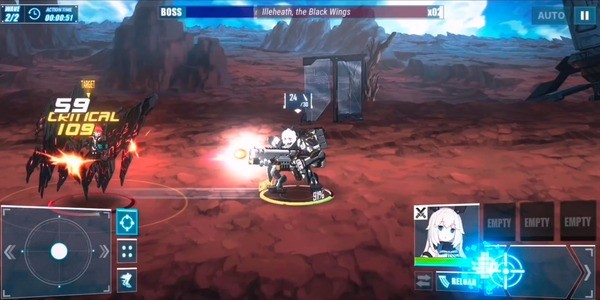 The battle takes place as follows. Your army is located on the left – all characters gather in one place and move at the same time. You can move them around the screen while they attack opponents – they appear on the right. The screen is constantly moving from left to right. In short, this is a typical side-scroller. However, you cannot bother, but turn on the auto battle option. In this case, the heroes will attack themselves, but there is a chance to run into a very strong opponent, whom it is better to defeat on your own.

The authors of the game have created a very non-standard, but fascinating cocktail of genres in their project. Unusual theme with RPG elements here has the form of a side-scroller, seasoned with anime style. At the same time, the developers did not forget about the main thing – the gameplay. It is very exciting here, so downloading Final Gear would be a good choice for any fan of this genre.