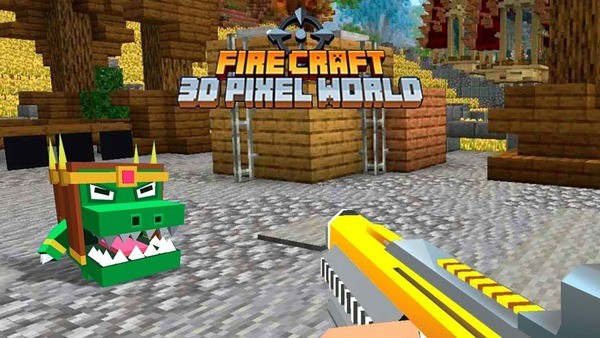 Fire Craft: 3D Pixel World is an online shooter game similar to famous Serious Sam series. You have to kill hordes of enemies from a variety of weapons in a world taken from Minecraft. Pleasant and familiar pixel environment has a large variety of enemies and maps. You have to visit about a hundred different levels. The player has access to a large arsenal of different weapons. In addition to the standard PvE mode, there is a mode where you will fight against real players. Moreover, if you like pixel games then we recommend you to download amazing RPG Rucoy Online.

Fire Craft: 3D Pixel World has over 5 million downloads with a lot of positive reviews. Let’s consider it in details.

The developers of Fire Craft: 3D Pixel World have provided several different game modes to entertain players. Survival mode allows you to put your skills to the test as you find yourself on a desert island and try to survive against dozens of different enemies. Story mode provides you with opportunity to enjoy some plot and go through an interesting adventure, using various weapons: cold, pistols, machine guns and grenades. This mode provides you with access to 50 different levels of game campaign. There is also a sniper battle mode against other players, where you need to show your sniper skills, fighting with real opponents from all over the world.

Fire Craft: 3D Pixel World has the style of Minecraft series – the whole world around consists of pixel square blocks familiar to many. Moreover, even the maps generate in the same way as the worlds in Minecraft, including relief and landscape features. All enemies are also made in a similar style and do not cause any dissonance, resembling mobs from the popular game. Game developers even drawn the weapons and characters exactly like their colleagues from Mojang. At the same time, a huge number of maps available to the player cannot bore you for a long time. There is practically no monotony in it.

The developers of Fire Craft: 3D Pixel World did their best, providing players with a huge amount of different game content. No one will leave deprived and bored after playing Fire Craft: 3D Pixel World. For fans of adventure and linear walkthrough, the developers have created more than fifty different levels of single player campaign. In addition, the game has other modes with hundreds of different maps with magma, oceans, labyrinths, ice etc. Moreover, more than a hundred enemies in the game can help you in practicing your shooting skills. Fans of customization can appreciate almost two hundred of the most different skins for main character. You can play as a zombie, pirate or skeleton. Creators also presented a battle pass with various challenges and rewards.

The game has the same style as legendary Minecraft, providing the player with same pixelated cube world. All characters, enemies, weapons and the whole world represent pixel style, relaxing eyes. Nice and user-friendly interface does not make you think about which button to press. Good soundtrack and pleasant music allow you to focus on the gameplay. In-game sounds do not interfere with the game and only indicate the player action with a sound.

The developers of Fire Craft: 3D Pixel World, have provided a wide variety of weapons and models for the player’s character. At the same time, you can buy everything for game or real currency, which is a problem for many players. Not everyone wants to save a large amount of in-game currency or invest real money in the game. We can help you to solve this problem by offering a mod for unlimited money.

The presented mod for Fire Craft: 3D Pixel World provides you with unlimited game currency from the very beginning of your adventure. At the same time, we want to draw your attention that unlimited money feature is not as helpful as you think.  For example, you cannot immediately buy any weapon and destroy enemies, since the player needs to complete some tasks to unlock new guns or reach a certain level. This is also the case with some other purchases. All the same, our solution can make the player life easier significantly. Install the game using our detailed instructions below and face the crowds of enemies.

Gameplay Fire Craft: 3D Pixel World is an online shooter with different game modes where you have to fight against both real players and AI characters. You can control your character using motion stick on the left side, swiping your finger across the screen for inspection and buttons on the right screen side for shooting. In addition, at the bottom of the screen you can find a bar with weapon selection menu that is the same as in Minecraft.

Fire Craft: 3D Pixel World is an interesting project with graphics and performance unusual for shooters, as well as a lot of content that is available to all players.