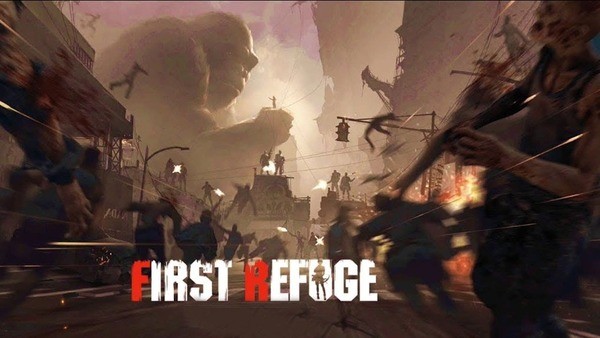 Terrible virus turns all planet inhabitants into zombies. Corporations want to wipe out humanity from the face of Earth. This can happen if there is no hero who will oppose the forces of evil. Download First Refuge: Z on your android device to save the world together with other online players. You have to gather army of survivors to put up a worthy resistance to bandits, zombies and merciless corporations. Victory in the Battle of Wasteland should be yours. Build underground fortress and prove your superiority over evil spirits. Fight with real players, as fate of humanity depends on you. Download other strategies as well. For example, Clash of Empire and Rebel Inc.

First Refuge: Z attracts gamers from all over the world with its outstanding gameplay. Read more in our review.

Principle of playing First Refuge: Z is quite simple – player needs to build underground fortress, collect resources and open new rooms to hide from zombie’s invasion. The more reliable and stronger the fort is the more chances it has to stay alive and gather strength for decisive battle. You also need to unite in alliances and participate in battles against evil spirits in order to recapture the wasteland. First Refuge: Z is fun and exciting to play and there are simple rules to defeat evil monsters. First, you need to strengthen and improve your fortress. There are many rooms that you can furnish using materials. Premises can become a safe haven from hordes of zombies.

First Refuge: Z allows you have to take part in battles against zombies. In this way, you can earn additional materials and useful items to strengthen your fort. The battles take place automatically. You choose heroes, attacking strategy and watch the duel. Zombies come at you in waves. It is required to use the special skills of characters in time. Each skill has its own cooldown time, so you need to use them wisely. You can also enlist the support of faithful dogs that attack enemies. Don’t forget about bosses – it is quite difficult to kill them, but reward is appropriate.

Team up with other players

Expand your army. In order to do this, you should unite with other players and take other survivors into your team. It is important to enlist the support of allies who cover in battles against zombies. Main advantage of any army is strength and power. Therefore, you should win over as many allies as possible to your side. It is worth cooperating with other players to defeat a common enemy. Come up with victorious tactics and free the Wasteland from zombies! Even the strongest fighters need cover, so don’t forget about support from your allies.

Take part in battles and summon legendary heroes to your side. It is much easier to conquer Wasteland with their abilities. Now, there are several dozen heroes in First Refuge: Z. Each of them has its own distinctive abilities. In addition to external differences, you can also use special skills. Therefore, you need to choose characters for battles wisely, because different specializations may be required in each specific situation. Assemble your team of great winners and clean up the Wasteland.

First Refuge: Z has standard strategy graphics. It can be called quite average. At the same time, developers made quite well characters and implemented beautiful animation of combat skills. Amon other advantages we can mention in-game sounds, because screams of zombies and shots from weapons have the highest level.

In order to develop your base, buy and upgrade heroes in First Refuge: Z, you need money that are always in short supply. However, now you have an opportunity to download mod for unlimited money and play without restrictions.

We confirm that by installing the presented version of First Refuge: Z, you can get unlimited amount of money at your disposal. Please note that game bases on multiplayer, which is why developers are careful to ensure that all users play fair. In this regard, you can observe some malfunctions in mod functionality. However, we always try to post the most current versions of hacked games as soon as possible.

After launching First Refuge: Z, player can see the apocalypse in all its glory. Usual world was destroyed by outbreak of deadly virus that turns people into zombies. Earth has turned into a wasteland, invaded by bandits, undead and evil corporations. In order to survive and fight, you need to unite in alliances, build underground shelter and give worthy rebuff to monsters.

Equip your shelter and build rooms to hide from zombies safely. Automatic battles help you collect necessary items and materials useful for strengthening the underground fortress. Get dangerous dogs – they can help you fight zombies. It is time to gather a team with players from all over the world and defeat the forces of evil.

At first glance, it might seem like First Refuge: Z is another common zombie strategy. However, you just have to download it to be convinced of its uniqueness. Fascinating storyline, interesting tasks and high-quality graphics can immerse you in apocalyptic universe for a long time. It is an addictive game for those who love strategy. Test your combat skills and become part of the story in fight to save humanity.