Flippy Knife is an unusual game that combines elements of adventure and shooting simulator. Instead of classic archery or firearms, you have to throw various cutting objects, but this doesn’t make the plot less interesting. The developers of Flippy Knife designed it exclusively as a fun time killer that can help you spend hours playing the game. However, such game distrust turned out to be completely unjustified. Despite the simple design and seeming monotony, the gameplay turned out to be quite rich and dynamic. By the way, if you are a fan of such arcades, then our team can offer Beat Fire and Dig This.

10 million downloads have already made this game cult. Let’s find out what’s the secret of its success?

Don’t get distracted from the gameplay

The developers have provided players for the possibility of endless play, enjoying each level. At first, the gameplay is rather incomprehensible. However, after the first levels, it is easier to understand all physics and get more pleasure from completing levels. After understanding Flippy Knife mechanics, you just have to figure out the classification of knives. Choose the most suitable weapon for yourself and go to win the title of champion. 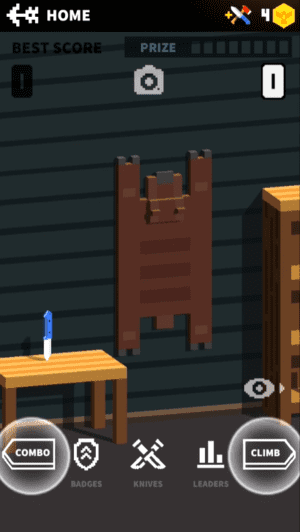 You can choose your weapon in Knives tab. Here you can get acquainted with entire arsenal and available copies for purchase. There are almost 100 weapons in Flippy Knife, but all models open gradually. The rarest models can be “purchased” only for viewing ads or for daily logging into the game. Each knife has a set of unique characteristics: weight and gold amount received for each knife turnover.

The stump is the very first location in Flippy Knife. You just need to throw the blades so that they stick into the logs. The more turns per throw, the higher the number of coins earned. The next location is a house filled with various wooden objects that serve as a target. You can only move through the house after successful throws, so aim carefully. 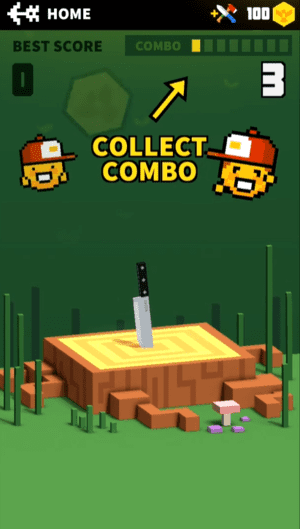 Third location is a shooting range where you need to hit the target. If you hit the target eight times in a row, you become the lucky owner of a chest with coins. Moreover, if you manage to make several successful throws, the target begins to move, so your task accordingly becomes more difficult. Traveling through the forest represents the pursuit of a flying robot trying to steal a chest of gold. Here you have to throw the blade up, trying to hit the robot. If you missed, and the knife fell, it is necessary to start over.

The stylized low-poly graphics represent graphic component of Flippy Knife. All the effects look real especially considering the fact that physics of knife throwing is practically real. Action sounds and music in the background don’t distract from the game, but only allow you to immerse in the process of throwing knives better.

Our team invites you to download Flippy Knife with mod for unlimited money. Now, you can buy any kind of knives and thereby improve your own records. The more expensive the knife, the better its characteristics, so do not deny yourself anything.

We have tested the unlimited money feature for Flippy Knife and can guarantee its full functionality. In fact, already at the first start of the game, you get an almost infinite amount of gold coins on your game account. With its help, you can buy the entire arsenal of melee weapons. Choose your knives wisely, as they vary widely in performance. Different levels and situations may require a different type of knife. In addition, we also checked the mod for malware. The antivirus scan results did not reveal any problems with the game installation file.

A few words about the gameplay. There is no need to fight with anyone, although the competitive element is still present. The user interface is maximally adapted for playing for a long time. You can also find a leaderboard showing the achievements of all participants. The main battles take place with own endurance, agility and intelligence. 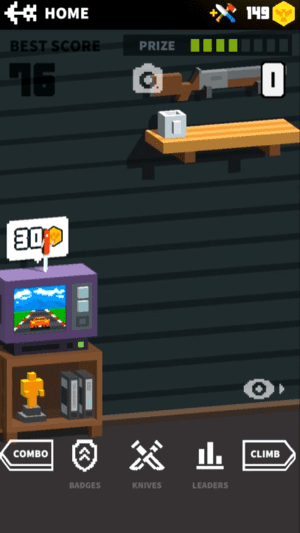 Flippy Knife has several levels. Each of them provides players with a specific task to throw weapons. In one case, you need to throw a knife into a tree. The other comes down to aiming at a kind of target placed in suspension. We can sya that game mechanics are quite diverse. The same applies to the variety of available knives, blades and daggers.

At first, the game mechanics seem quite difficult, but when understanding finally comes, it becomes more interesting to play. When you figure out the basics of throwing weapons, you need to delve into the classification of weapons. Be sure to choose the right machete to become the best knife thrower.

Download Flippy Knife and take part in a new competition. Show miracles of composure, coordination and accuracy to become the best of the best. The developers are constantly updating the game and do everything to make it fun and interesting for players. The latest update brought new types of weapons and now you can choose among 100 units of edged weapons. Collect rating points, earn awards and just have a good time.

How to Install Flippy Knife Mod?

Don’t forget to delete the original version of Flippy Knife before installing our modified version to prevent errors during installation process.