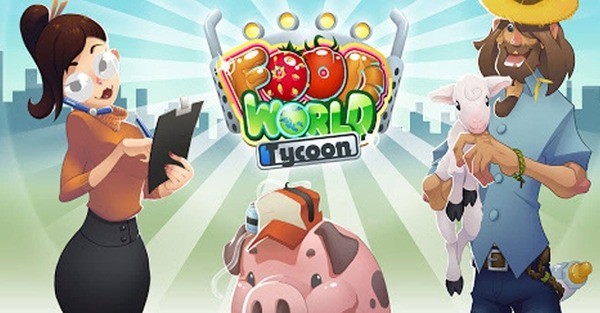 Play Store contains a large number of games with theme of cooking or farming. Such games are interesting for plot development and possibility of promoting a farm or restaurant. Not so long ago, Food World Tycoon from the developer upjers GmbH appeared on the Internet. It became popular thanks to a number of farming games, as well as unique arcades related to zoos and wildlife. Another novelty from this developer has become a real boon for lovers of farming, as well as the opportunity to start own business. The application prepares a real culinary startup for players and possibility of obtaining the title of the best player. We also recommend downloading Cooking Fever and Family Farm Adventure.

Food World Tycoon appeared on Android platform relatively recently, so there are not enough installations on Play Store. This is one of the reasons the game does not yet have reviews and stable ratings.

Food World Tycoon provides players with access to a huge map, which displays all points possible for work. However, almost all of them are inaccessible. After all, the main character has to achieve success first in one part of the vast world and only then go on a real journey. However, you also have to send stocks of crops grown to nearby cities and towns.

After the player has mastered farming, he needs to open new workshops designed to advance the business. You will be able to open own bakery and bake bread from wheat grains. With opening of the research center, you can get access to complete information about plants, animals and other details of statistics. Get in garage to get acquainted with the machine business, because a small truck that needs improvements makes deliveries to other cities. The player is waiting for opening of new enterprises and workshops to promote the network and allow him to immerse in own culinary business.

Food World Tycoon application presents the protagonist with opportunity to move up the levels. With each new step, the player opens up new opportunities, industries and crops. For this, you need to get a certain amount of experience. You can get it by planting plants, caring for animals and opening up new branches of the economy. Information about the current level is available In the upper left corner, as well as the amount of experience earned.

Food World Tycoon allows you to collect a range of achievements that can earn you significant rewards. Most often, certain number of crops grown, supplies to other cities, as well as opening of new economy branches can bring you such achievements.

The graphics in Food World Tycoon features 3D and 2D components: most of the game takes place in an open volumetric area, where branches, enclosures with animals and areas with crops are located. However, developers presented protagonist notebook and all the characters in the project in 2D minimalistic graphics.

An invigorating, unobtrusive melody plays in the background as musical accompaniment, which you can hear in almost every game mode. All actions of the hero are voiced: changes in the notebook, collection of experience points, sowing and sending a truck with a supply.

The main currencies in Food World Tycoon are money and gold bars. It is not so difficult to get them, it is enough to complete tasks, receive rewards and sell the goods produced. However, more often than not, there is simply not enough money to promote your business. Everything goes to planting plants, pet food or repairing a truck. Therefore, you have the opportunity to install a game with a built-in mod that allows you to get unlimited money.

The game begins with an explanation of assistant about features of the chosen case. Then you can proceed to the setting of selected area, sowing it with crops. There are several important buttons available: World Map, Mail, Placement of Objects, Shop and List of Quests. It is enough for the player to complete the tasks displayed on left side of the screen, because most of the plot depends on them.

Food World Tycoon is a balanced mix of rural and urban work, because the whole history of the culinary business dates back to precisely garden beds that are located near the garage. The gamer has the opportunity to open his own business and try himself in the role of a real entrepreneur and head of the business industry. Become the most popular owner of a restaurant chain through the entire world.