Forge Defence offers to become the owner of a forge and a laboratory to research new technologies, structures, weapons and traps. You will be able to make improvements and mechanisms on the spot, through which to strengthen the strategic base. Do it with all responsibility, because every night the danger will increase. Changing levels means not only an increase in the number of opponents, but also an increase in their attack parameters, strength, and abilities. As you progress and invest points in skill branches, you will unlock new chips and technologies that allow you to create an impregnable fortress and easily fight off even the most dangerous night monsters. If you are into strategy, then download also Country Balls Io: Battle Arena and Transit King Tycoon.

Forge Defence has over a hundred thousand downloads and its average rating is exactly 4 points. You have at your disposal one building at the beginning – a forge. Protect it from the attacks of monsters that make sorties at night. Every night, enemies visit this area, trying to destroy everything in their path. To protect the forge, you will have to purchase various structures from the store in the form of walls and attacking towers. Make purchases for diamonds and emeralds. Set up a tower with a crossbow to shoot at enemies. Place additional wooden or stalls to make it harder for the enemy to get directly to the forge. Place a cactus, swamp or mines next to the tower to deal preemptive damage to the enemy.

You have a few minutes to equip the protection of the forge. After that, night falls and a mob spawn point appears. By the way, consider this when forming the defense of your building. For example, it is logical to lay mines near this point so that the monsters will surely step on them. If we talk about the opponents themselves, then for the most part they are undead. Zombies, skeletons, griper and so on. Of course, each of them has its own characteristics. For example, the weakest level 1 zombie only moves forward at a moderate speed and has a low hit point. For example, ezermen is the most dangerous enemy of all. He has a lot of strength and health. If you see it, destroy it!

Use a variety of boosters

To make playing Forge Defence even more interesting, the game developers have introduced several boosters with various power-ups and bonuses into it. For example, consider lightning. After activating this booster, you need to specify where it should hit. When lightning hits a monster, it will immediately burn. You can also skip the night with a booster. Use it even directly during the night. In this case, the day will immediately begin, and all monsters will explode. It is also possible to put a protective shield around the forge for one night. No monster can break it. 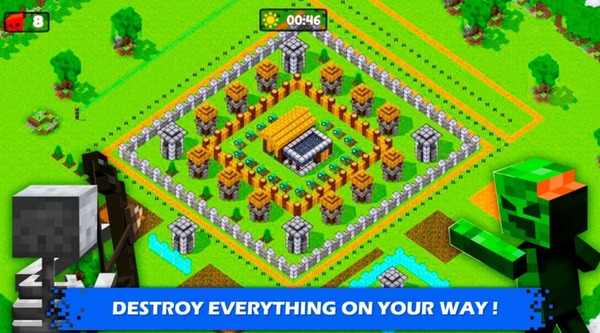 The game features pixel art and has many sound effects. Each monster sounds different and you will hear disturbing music during the attack of enemies.

Download Forge Defence mod, which gives unlimited amount of in-game currency. This allows you to build any buildings to protect the forge effectively.

Forge Defence is a pixel-art TD strategy game where you have to defend your territory from monsters. Upgrade your forge, protect it from all sides and repel the attacks of zombie monsters that will attack you every night.

The gameplay consists of two main activities – during the day you have to improve the defense of your forge, and you need to repel the attacks of monsters at night. Acquire various structures and attack towers to protect your forge, build walls around it and place towers in strategically important parts of the map. With the onset of night, zombies will begin to attack the forge. Every night the place of their attack, the number and power will change. 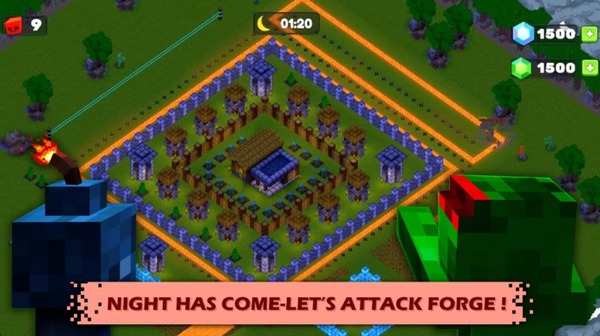 Use special boosters for additional protection – lightning booster deals powerful damage in the specified direction and shield booster will not let a single monster pass to the forge. In addition, skip night booster will take you to the next day with saving the loot. There are three difficulty levels – easy, normal and hard, which is unlocked after reaching level 20. As you progress through, new protection elements will open and more pumped types of zombies will appear.

Forge Defence is a rather interesting game made according to the canons of the tower defense genre. Destroy waves of enemies using all available arsenal.