Furious: Heat Racing – races where the user can compete with artificial intelligence and real players. The game has several modes: campaign, multiplayer and a whole series of races dedicated to one of the licensed cars: Subaru BRZ, Mazda RX7, Dodge Challenger and so on. The game is divided into two large blocks – day and night. During the day, legal races take place, while all racers turn into outlaw street racers at night. After an unsuccessful chase, you can lose half of the money you earn and lose your reputation. You get money for winning races during the day, while at night you get reputation. It plays the role of experience: go to a new level with which it is possible to open cars, parts, races and tasks. If you love racing, then also download Ace Racer and Riding Extreme 3D.

If you are interested in the details, then download Furious: Heat Racing, and first read our review. 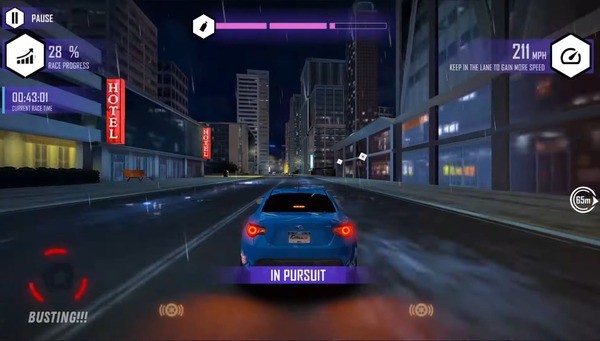 Gameplay here is as arcade-like as possible. The car takes off and accelerates to indecent speeds in just a few seconds. You can beautifully enter the turn with the help of drift. At the same time, the car can easily demolish the concrete fence and the maximum that will happen is a loss of speed by 10-15 km/h.

Practically, we cannot see the damage on the car, except for a bit of scratched paint and a cracked windshield, even if the racer just crashed into a truck at full speed. However, the game does not position itself as a simulator, so it is quite possible to forgive it.

If your car is not good enough, then it will become more difficult to win a race in Furious: Heat Racing. There are many cars in the game – several dozen. Access to them opens at high levels of reputation after completing story missions. The choice is rich, from unpretentious Subaru and Chevrolet to super-sophisticated Mazda and Dodge.

There is also a place for tuning – access to new engines, brake pads and other bells and whistles opens up for each level of reputation. Some upgrades can either dramatically increase the power of the car or reduce it by a few points. Then it will start to drift better.

There are not many types of races in the game, but there is a variety. These are races in a circle, sprints and drift. Normal racing races are scattered around the map and differ for money/reputation at stake. Story races are associated with the key characters of the story. 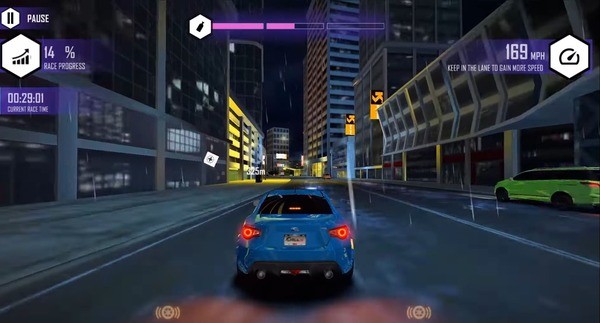 The plot itself in the game is quite simple and you practically do not pay attention to it due to the lack of any intrigue or interesting characters. In part, it resembles the movie “Fast and the Furious”. You only need to justify the chaos and action that is happening on the screen. Participate in any races and just drive to a special marker. There is only one natural limiter here – power of the vehicle.

The app has great 3D graphics dominated by neon tones. Enjoy dynamic weather changes and many different car models. Well, you can hardly distinguish the sound of the engine from the real one.

We recommend you to download Furious: Heat Racing mod for unlimited amount of money. This allows you to purchase the best car models and other improvements.

Management in Furious: Heat Racing comes down to arcade – tap on one of screen parts to change lanes. This helps you to avoid collisions with oncoming and police officers. The last point is quite difficult even in the tutorial mission. Those who are not very handy will have to replay it, because the main task is to get to the finish line first.

As for online, this is drag racing, where you need to press tap at the right time to perfectly switch gears in order to win. Note that you can smear and come first even on the first car and the opponents are usually weaker than us.

Furious: Heat Racing is an excellent arcade racing game with nice graphics and spectacular races. Enjoy a rich fleet of vehicles and improved controls that will delight casual racers.