Furious Tank: War of Worlds is a mobile action game from Click.18 Mobile. The project offers the user the opportunity to take an active part in tank battles. As part of the gameplay, you can choose a combat vehicle you are interested in from a rather impressive list, face real or computer opponents, earn money to improve the characteristics of your equipment and customize it. Each tank has its own value in coins, characteristics, power of the weapon used. Application offers two modes of passage – a single-player campaign in which you take part in a global war, as well as multiplayer. The latter allows the gamer to measure his strength with other project participants. We also recommend Hitman Sniper: The Shadows and Boom Beach: Frontlines.

The developers have created great gameplay, proved by the number of downloads. More than 10 million users have installed the game. 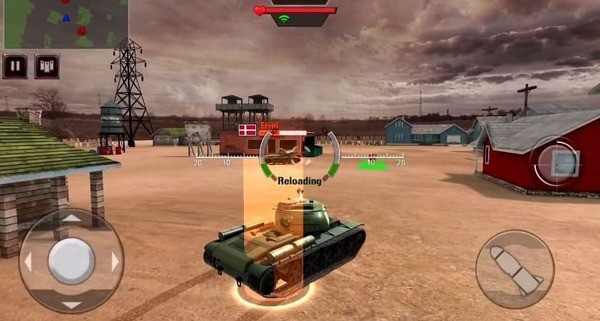 Before the battle in Furious Tank: War of Worlds, you need to decide on the tank and the country to represent on the battlefield. If the choice of a tank affects absolutely everything, then the country’s flag simply helps you find like-minded people on the battlefield and fill you with the spirit of patriotism. The choice of tanks is wide enough. You can find such legendary combat vehicles as T-34, Panther, Sherman and other models. Your tank is your face. Here you need to look after him: repair, refuel, supply ammunition, improve, choose camouflage for the type of terrain, and so on. All these possibilities are cleverly played by game mechanics. The fuel level here replaces the usual energy strip for thousands of action games. Fixing and improving are mandatory, as your opponents will develop rapidly and you cannot lag behind them in any way.

Each improvement requires not only the cost of in-game money, but also some real time. Each tank in Furious Tank: War of Worlds has four main parameters:

All the main parts of the machine are available for upgrade: engine, tracks, chassis, barrel and turret. Everything lends itself to common sense, so the improved engine will not affect the damage from the shot and the improvement of the barrel will not affect the armor. The reserves of in-game currency are not endless, so it is important to find the balance that will guarantee you success on the battlefield.

The battles themselves take place on many different maps. They are not available all at once, but they will definitely open as the player’s profile is upgraded. There are three game modes in total: 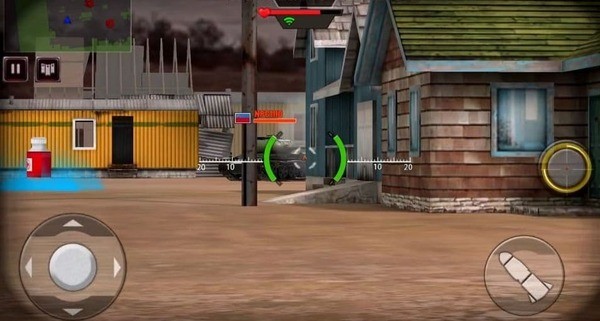 Modes in Furious Tank: War of Worlds may not surprise you with their novelty, but they perfectly fit into the concept of tank battles. Destruction of an enemy combat vehicle brings instant bonus that falls to the ground. These can be cash rewards, a repair kit (similar to a first-aid kit), amplification of shells, additional experience, and much more. The battles here are of a session nature and its duration is three minutes. It may seem to you that this is very little, but it will be clearly clear who won in three minutes. As mentioned above, each battle consumes a certain amount of fuel, and you will need to wait a while before the next call.

Furious Tank: War of Worlds has realistic 3D graphics that creates a full effect of presence for the user. The application can offer high quality images, support for HD resolution, as well as well-drawn tank models.

The locator helps you track enemies on the map, but its action is short-lived. Moreover, in order to purchase such a tool, you will need in-game currency. However, we suggest you download Furious Tank: War of Worlds mod APK, which allows you to see enemies on your radar.

The gameplay of Furious Tank: War of Worlds represents classic “tank shooting”. It is enough to imagine a Counter Strike game, only about tanks. This will be the most comprehensive description of the project. The gameplay here consists of constant skirmishes between users, as well as against bots controlled by artificial intelligence. Each player begins the passage with a story campaign, in which it is worth hone their skills in controlling a combat vehicle and then break into the battlefield in the online space. 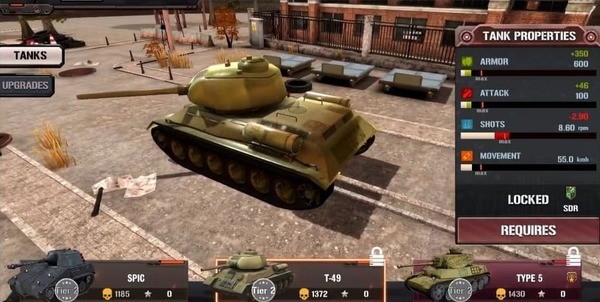 Tanks of different factions differ not only in appearance, but also in specialization. However, thanks to the mod tool, you can transform your car into almost anything by adjusting it to your playstyle. In addition, the player has access to the function of customizing the appearance of equipment. You will receive points for victories in online battles. They affect your rating, as well as how difficult your opponent you will face in the next session.

Modify your vehicles to make them more effective in battle. Increase speed, increase firepower, make the tank more maneuverable or armored. Only player in Furious Tank: War of Worlds decides which playstyle suits him best. Customize the appearance of your vehicles to stand out from your opponents. However, you can also use camouflage as a tactical move to surprise and then destroy the enemy. Drive real-life tanks. Choose one of the machines of the Modern era, learn more about it, evaluate its characteristics and then rush into the battlefield in order to sow destruction.

Download Furious Tank: War of Worlds to immerse yourself in a dynamic, realistic military conflict involving tanks. Despite all the shortcomings, the project has an interesting idea and implementation.