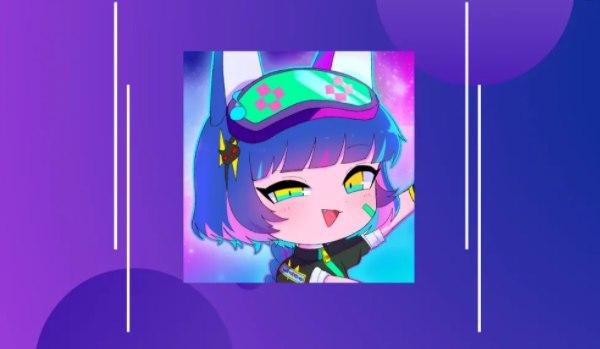 Gacha Club is a project for mobile devices with a varied and functional base of tools for creating unique anime characters. In addition, the app allows the user to create unique comics featuring characters they have created themselves. It is not a game in the traditional sense of the word, because there is no specific gameplay here. Players can create adventures and stories for unique characters , illustrate them through the creation of comics. This is a kind of sandbox in the anime world, where each user can create own unique story.

Read on to find out the main benefits of Gacha Club.

All heroes, elements of their clothing, accessories and weapons have anime style. This project can appeal to fans of Japanese animated films. Editor allows you to create characters from favorite anime, independently create a crossover from several projects and come up with own story.

Create a default character – hero, and add whatever you need to it. It’s easier if you have a clear plan in your head for who you want to create. Gacha Club has everything you need for such a task. The authors did not skimp on details. You can create your anime exactly as you imagine it!

Use many types of hairstyles and eyes to personalize your hero. Moreover, you can customize each eye separately – eyebrows, eyelashes, and so on! You can change the color, shape and slope of everything – it is space for creativity! Adjust anthropometric parameters: height, thickness and proportions. Add clothes and accessories and choose one of six hundred poses for your character! Just get exactly what you want – you can easily get lost in Gacha Club for a few hours!

Make your own movie

After you have created all the necessary characters, you should go to the studio and start creating scenes. Everything is also familiar and multifunctional in the studio. Use a large selection of backgrounds that allow you to take the action of the event anywhere! Choose the background and characters to participate. Place them where you want them, rotate as needed and add text to indicate words! You can add pets to the scene – up to ten animals per screen. Save and use the resulting scene later.

The battles have a turn-based concept, but even more simplified. We have a team of heroes by default (change them if necessary). They attack in order of priority of enemies indicated on the screen. Each of the heroes has normal and super attacks, as well as a life scale. If lives run out, the hero disappears from the party. As soon as everyone dies, you lose. 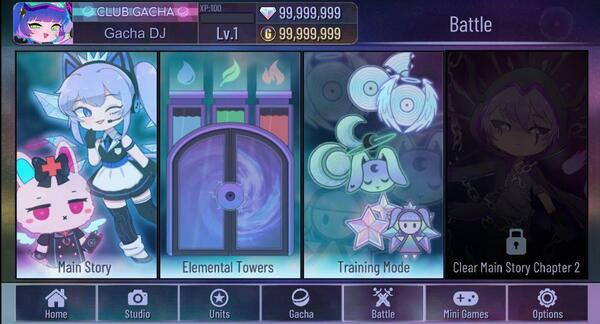 The storyline campaign has levels with dialogues and plot.

Each of mini-games also uses the Gacha heroes. You can take part in pair dances by pressing the indicated keys in time, train your memory by finding the same cards, test your reaction, beat strangers with a hammer and let your friends through. This allows you to relax in the intervals between creating scenes!

We can’t consider Gacha Club complete game due to almost complete lack of gameplay, so it would be more correct to name it as an editor. If we count all the possible options for customizing characters and creating animation, we can conclude that we have a rather powerful tool for creating short videos. The only caveat, everything focuses on anime, so making a sketch of an advertisement for toothpaste in a hurry cannot work. You have access to dozens of different windows, where you can carry out such a variety of actions with your characters that we can talk about it for hours. 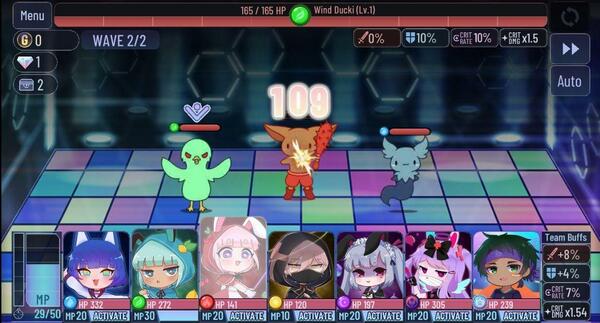 There is nothing to say about the sound component, because in fact it is absent in Gacha Club. However, you can listen to some funny soundtracks in Battle Mode. In addition to background music, you can also hear sound of various actions during the battle. The main characters only talk to each other through text, as it should be in the anime.

Despite sidelined game component, developers added in-game currency without which you simply cannot get around in Battle Mode. At the same time, both regular G-Coins (analogous to gold coins in many games) and diamonds required for premium purchases presented in Gacha Club. 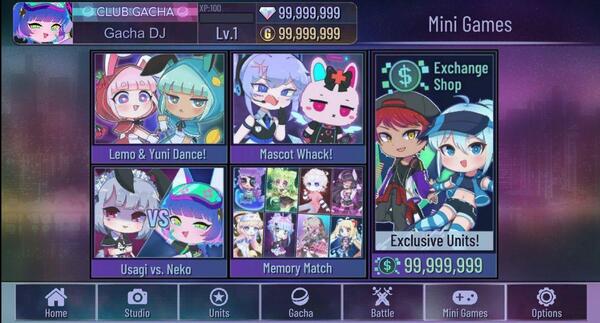 For this money, you can unlock new heroes, buy them various improvements and, most importantly, carry out upgrades for your characters in order to upgrade their level. Given the fact that there are many characters in the game, there may simply not be enough money for everyone. Therefore, we suggest you download a mod for unlimited money that can supply you with an infinite number of coins and diamonds free.

Especially for the visitors of our website, we checked functionality of mod for unlimited G-Coins and diamonds in Gacha Club. Based on the results, we can guarantee its full performance. We tested the game on several devices and there were no problems with functionality.

In order to take full advantage of the modified version, you only need to download it from our website and install on your device. After the first game launch, you get a huge number of coins and diamonds on your balance. This amount is undoubtedly enough for all the desired actions with the characters. In addition, you don’t need to turn on anything in the game, unlimited option activates along with launch.

Despite the fact that Gacha Club positions itself as a full-fledged game, while being in the sandbox genre, it definitely deserves attention. The developers implemented idea in a very interesting and colorful way. Moreover, they added a large number of functional elements to interact in full. For beginners in this genre, it may seem that the game is quite complicated, but it is completely wrong. Moreover, don’t miss our gift – modified version of Modern Warplanes.

How to Install Gacha Club Mod?

Don’t forget to delete the original version of Gacha Club before installing our modified version to prevent errors during installation process.