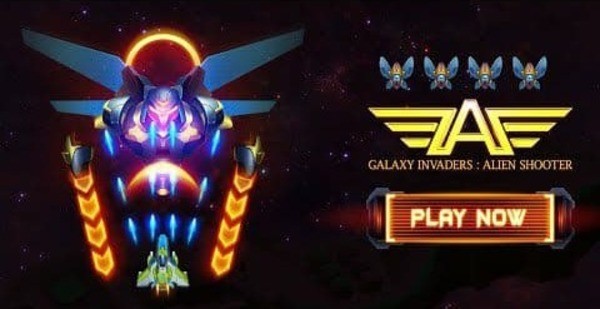 Galaxy Invaders: Alien Shooter is a classic space shooter reminiscent of old Tetris games or slot machines. However, everything is much more interesting here! Fight long and hard, because the game has a huge number of levels. Destroy space monsters and fight bosses. Shoot as accurately as possible with your blaster and don’t forget to buy new spaceships or upgrade existing ones. Become a hero of the galaxy and save your planet from invaders. Check out also arcade games Bubble Shooter and Tank Stars.

Galaxy Invaders doesn’t offer a completely new gameplay, but it has many interesting features of its own. Find out more below.

Galaxy Invaders: Alien Shooter is very easy to control, but that doesn’t mean that game is easy to play. Each level invites you to fight waves of enemies and bosses at the end of some locations. During the level, you can receive various bonuses and improvements. For example, it is possible to improve ship weapon temporarily or get protective shield that can make the hero invulnerable for a while. By completing the stage, you receive money that you can spend on improving your ship or buying new skins for it. There is also a gradation by stars. Depending on your skill, you can receive from one to three stars after each adventure. If you are a perfectionist, then the level can be re-passed to get the maximum score. 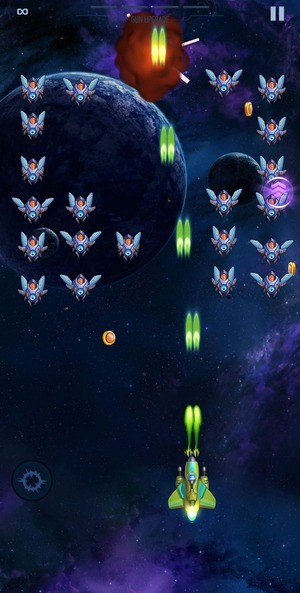 You can get bonuses and gifts in the game not only after defeating bosses. Indeed, the game also has cases – the so-called chests divided into several types. Depending on the chest rank, the reward also can be different. The cooler the case, the better the bonuses. Developers did not forget about the daily and weekly tasks. By completing them, you can get the gems needed for premium upgrades. Galaxy Invaders: Alien Shooter also features rewards for daily logins to the app.

If you are tired of battles with artificial intelligence, then you can plunge into multiplayer. Here you can unite with other players in clans and participate in adventures together. Also, try to score as many points as possible to get into the global leaderboard. Set a record and enjoy your time among the best players in the world! 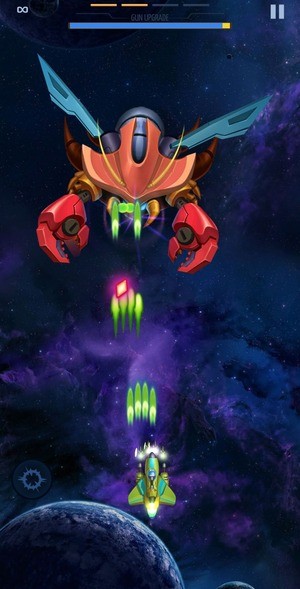 Although Galaxy Invaders: Alien Shooter has the style of old games, developers have made the graphics very modern. In addition to the fact that the project has a huge number of enemies, you have an opportunity to customize the spaceship at your discretion and buy new ships. You can even change the pilot appearance. We should say that sound in the game is excellent. It takes you to the world of space battles, where each blaster shot and boss explosion has a unique sound.

In order to upgrade your spaceship, improve its combat power and equip it with new weapons, you need money and diamonds. In addition, you cannot buy new ships without these funds. We invite you to download a mod for Galaxy Invaders: Alien Shooter. Use it to receive an unlimited amount of resources on your in-game account. Now, your walkthrough can become easier and more interesting. At the same time, we note that even with money, you wont’ be able to buy all the ships immediately. Some items in the game shop open only with your progress through levels. 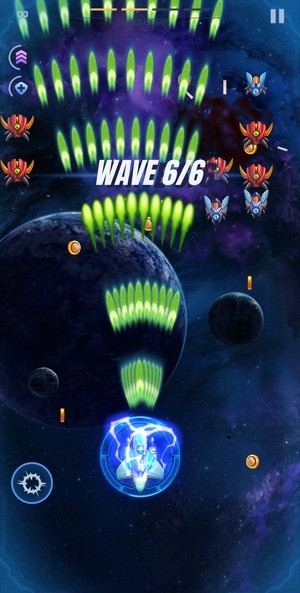 Based on the test results, our team guarantees you mod functionality. By installing the game, you receive an unlimited amount of money and gems to your account. Use these riches to buy premium spaceships, as well as improve them. Usual project version provides users with an opportunity to save money for a very long time, which definitely tires. By the way, installation file is safe for your device. Please follow our tips below to install modified version correctly.

Your main task in Galaxy Invaders: Alien Shooter is to destroy enemy troops and their leaders in open space. Upgrade your ship and kill everyone in your path. In order to make the gameplay more varied and interesting, the developers have come up with many bonuses that can give your ship additional power. Explore all the features of this great app as you complete epic levels in the single player campaign. Don’t forget about the multiplayer, where you have to fight side by side with true friends or random players from all over the world. 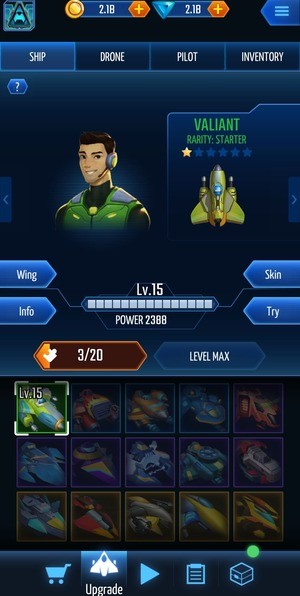 Game allows you to create a powerful army. This is the only way you can use to win war, save humanity and the entire galaxy. Control many spaceships with impressive technical characteristics. Equip your army and fight in massive galactic battles. Save the galaxy, become a new hero.

Galaxy Invaders: Alien Shooter is a great time killer that can entice you for a few nights. The game does not require any special skills from the user. All you need is reaction and a little perseverance.

Don’t forget to delete the original version of Galaxy Invaders: Alien Shooter before installing our modified version to prevent errors during installation process.