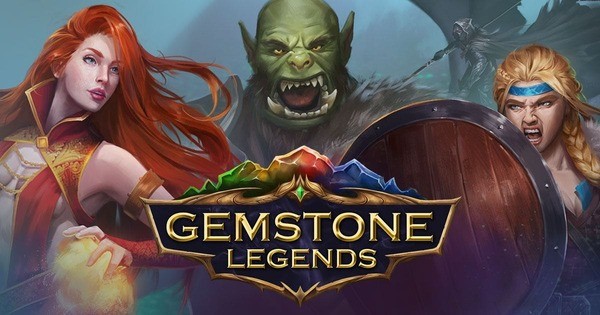 Gemstone Legends is a mesmerizing collectible RPG game in which you have to collect, upgrade, equip, and lead hundreds of unique fighters into battle. All battles here take place in a match-3 puzzle setting, but with some differences. You have to take part in numerous game modes, defeat deadly bosses and ponder the best tactics and methods of killing strong groups of enemies. The gameplay essence is to collect and pump various heroes that form the user’s squad. You must improve their skills and equipment, supply artifacts. The game has several battle modes, including a story campaign in which you will know about the world’s evil, planning to conquer all living things. We also recommend checking out Rage of Destiny and Pocket Rogues: Ultimate.

The essence of the Gemstone Legends is that you need to collect various combinations of stones using the three-in-a-row mechanic. Thanks to this, you attack enemies that are in front of your heroes. Everyone takes turns. Each attack can be prepared in three moves. During this time, you need to collect as many epic combinations as possible in order to deal more damage. By the way, you can move stones not only horizontally and vertically, but also diagonally.

Among other things, each of your heroes has special skills. Use them when the character gains maximum mana. Skills are attacking, defensive, or give the heroes useful buffs. For example, one of the characters heals his allies and the other imposes a massive buff on the attack. In addition, there is such a thing as color superiority in the application. Each hero has a specific color, just like the opponent. On levels, one color prevails over the other. Therefore, if you hit the right blow, you will increase the damage done.

Power of sword and magic

Gemstone Legends has a very large selection of characters to choose. There are many factions here, where you can find a variety of fairytale heroes. Each faction has its own set of unique skills and features that will come in handy during the battle. Each hero has four skills to upgrade. Basic skills include health, attack, defense and support. In addition to pumping skills, through experience and in-game currency, you can increase importance with help of additional weapons or other equipment. Some types of weapons open up new combat talents for your hero, which will not be superfluous during the battle. Therefore, not only magic, but also ammunition affects the player’s attack level.

It is worth starting right away with how battles take place in Gemstone Legends. Before the start of the battle, you need to equip your party with five fighters. You have to meet with several waves of enemies on the battlefield and destroy them quickly and prudently. The battle here takes place in turn-based mode, so you will have enough space for tactical decisions. Naturally, if you have not lost a single fighter during the fight, then this fight will be successful. Otherwise, you only receive a fraction of the reward expected for the level. 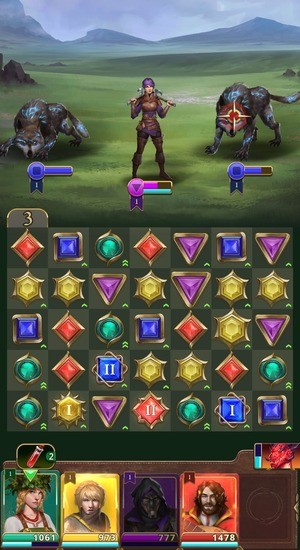 Most of your time, you will be busy completing the story campaign. Each stage has its own difficulty level, which automatically increases your reward. Don’t forget to encounter boss battles, which pose a huge danger to your entire team. In general, a well-chosen battle strategy plays an important role in the game. Starting from the choice of heroes, ending with the timely use of combat skills and special skills.

The quality gameplay of Gemstone Legends also features excellent graphic component. The game looks very cool and the animation does not lag behind, because the battles, despite their turn-based approach, look very dynamic. The design of super strikes requires a separate mention – you want to perform them repeatedly even when it is not required at all.

To pass the levels faster and kill enemies, we suggest you download Gemstone Legends Mod APK. It can increase damage and defense to values ​​convenient for you. Get access to it through special mod menu and select the desired attack and defense indicators there.

If at the first stages Gemstone Legends forgives a lot, in more difficult levels any skill lost at the wrong time can lead to critical and fatal consequences. Only the main attack works without reloading, which is not always the best choice. Stronger blows, on the other hand, take time to recover. If you don’t have a blow at the right moment, everything will end badly. For passing the stages, the player receives artifacts – ammunition items that enhance heroes. Some of them form sets. Having collected a set, you can get an additional effect for your character. In addition, player can upgrade artifacts, opening up the ability to increase the number of useful effects.

As mentioned earlier, there are more than a hundred heroes here. Each of the fighters has its own faction, race, class and role. Obviously, party lineups belonging to the same faction are more effective than heroes from different guilds. During the battle, the level of your characters will increase. Along with the level, the pumping of abilities also open. Do not forget about the talent tree, which can radically change the role of a soldier in a group. For example, a tank may not pump off attacking abilities, but only defensive ones. Sorcerer can completely forget about healing spells and plunge into the study of attackers. Ranks of the characters have several options for improvement, represented by stars of different colors. The most important component here is also the equipment. By upgrading each individual item, you can increase its effectiveness.

The project will appeal to fans of bright, rich plots, which have exciting battles. High-quality graphics, vibrant character animation, exploration of many combinations of skills, artifacts, talents – all this is Gemstone Legends.