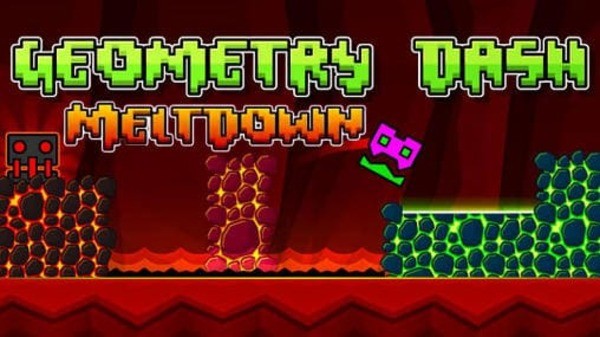 Geometry Dash Meltdown is a unique game created by RobTop Games. This features arcade genre and bypasses similar projects in many respects. It is an extension of Geometry Dash Lite. Its main difference from others is its interesting interface. You can become a winner here thanks to a good sense of rhythm. The application is not just an arcade, as it requires the gamer to have a sense of tact and rhythm. As in the previous parts, you can encounter monsters, traps placed everywhere and thorns that appear in unexpected places. The stylistic design exactly matches the arcade direction. Lava and fiery objects add entourage. Project differs from the previous ones, since the developers decided to complicate the playthrough and increased gameplay dynamism.

Join over 50 million Play Market users and download Geometry Dash Meltdown to your mobile device. It is a challenging, funny, bright and addicting platformer. See for yourself right now.

Geometry Dash Meltdown gameplay involves the continuous movement of your character. It is necessary to think over your actions a little ahead. Otherwise, you can crash into an obstacle and lose. Don’t worry, there are no limits on attempts or lives, try as many times as you like. Memorize your actions in order to move forward with a new attempt. 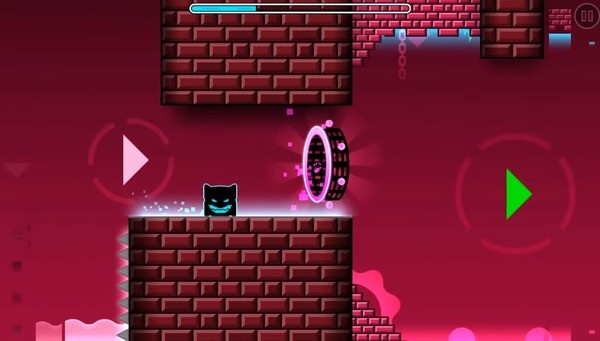 There are no plot or tasks. The goal is one – to reach from the beginning to the very end in one move. It won’t be easy, so try to be patient. The character is a cube that jumps, rolls over and slides while moving. You can see several modes after you have pressed the start button. In order to unlock the most difficult one, you need to go through the previous ones by 100%. It is worth remembering that traps remain in the same place after a loss, so we advise you to remember their location.

The project in question is only an addition, so Geometry Dash Meltdown offers not so much content as the original. You have three full levels to choose from, each of which represents three levels of difficulty. The funny thing is that the first level, which is the easiest, is the most difficult for gamers. It is important to say that the levels have no random generation. You need to memorize the path traveled for masterful passage of the stages. A special feature is the fact that there are peculiar forks in some places where you can choose your further path. This feature adds some replay ability to the gameplay.

Many traps and challenges

Each of the stages in Geometry Dash Meltdown offers you all the gameplay delights. You will only run in certain areas, and that is it. Usually, the most interesting thing begins closer to the level middle – transformation of your cube. You can ride a flying machine, become Velcro ball and much more. These areas are the most difficult for gamers.

Do not forget about the various track elements. Here you will encounter thorns, circular saws, mines and other obstacles. It is important to look at the platforms in advance as they can move. There are also various secrets. For example, dangerous spikes can easily protrude from a seemingly safe platform. There are also force fields that can provide you with a higher jump, sending you to a safe area. You need to understand absolutely all of the above mechanics to complete the stages.

The first thing that may surprise players after launching the application is the visual style. Bright and rich colors, general similarity with aggressive neon design will make you shine. At the same time, such an unusual style does not interfere with gameplay in incomprehensible way. Unpretentiousness of two-dimensional graphics allows you to run the application on almost any medium device. All obstacles represent the beat of dynamic music, so soundtrack in Geometry Dash Meltdown also plays an important role. 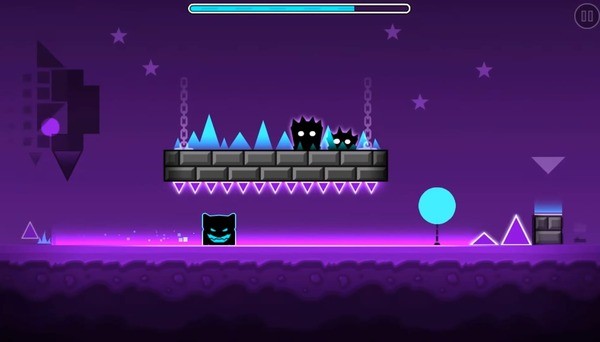 Download Geometry Dash Meltdown mod with all colors and characters unlocked. Such an approach can help diversify the gameplay and make it even more interesting.

Ingenuity of the developers has led to the fact that the further you go, the more difficult it gets. Fast frame movement, screen shaking, changing music, bunch of spikes and monsters. Sometimes the hero changes direction of movement or even gravity. However, do not rush to throw your phone out of the window after several dozen failures. A little more patience and you will definitely be able to complete the level!

Sometimes players of Geometry Dash Meltdown may face the problem that the track simply does not keep up with the main character. The player does not control the movements of the cube, as it rolls forward by itself. You just have to make the jump in time by clicking on the touchscreen. The most simple interface and intuitive gameplay make the project popular as a time killer with good music. Encounter both aggressive, dynamic tracks and smoother ones. All the tunes are special for this application, so enjoy high-quality sound. However, do not be distracted, because your task is to complete the level. 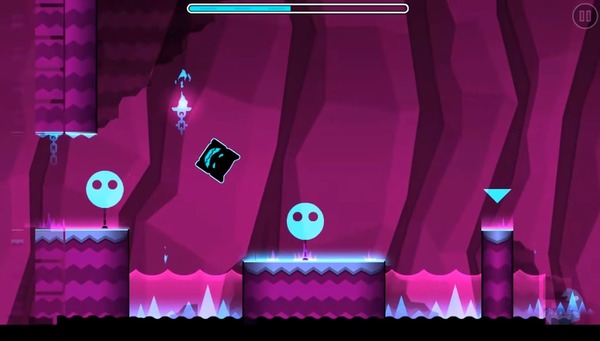 The game provides the ability to customize appearance of your character, replacing his standard appearance with specific indicator of emotion. Unlock new skins as you progress through the main mode. In addition, a new mechanic has appeared as part of the gameplay – gradual approach of lava to the main character. You have to make decisions as quickly as possible so that the funny cube does not fry. If you lose, you will start from the very beginning of the level.

There are three secret coins on each Geometry Dash Meltdown track. If you collect them all, then you can say with complete confidence that you have passed the game one hundred percent. Skins for the cube become an additional collectible here. Open them fulfilling certain conditions: passing a stage in a certain number of attempts, passing speed and so on.

If you love challenging games, then we recommend downloading Geometry Dash Meltdown. Don’t expect clues here and besides, you can’t save. Start from the beginning in case of failure. You have to be as careful as possible, have excellent dexterity and most importantly – patience. With all this, the game is incredibly entertaining and very fun. A bright neon world filled with rhythmic sounds of amazing music, as well as special effects awaits you. It is a truly quality platformer for the coolest gamers!