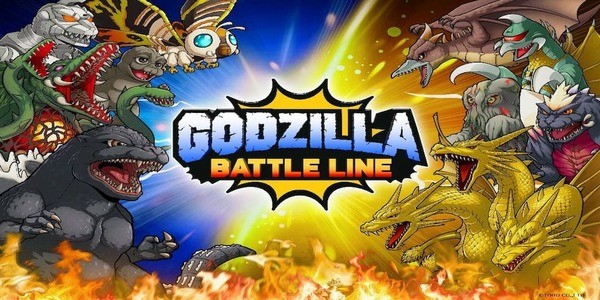 Godzilla Battle Line is an online strategy game where the user will have to fight other players online. Earth cities have become a battleground for huge creatures from the famous series of films about Godzilla, gather an invincible team and engage in 3-minute bloody battles against players from different parts of the globe, coming up with a strategy to win. Each of the monsters, be it Godzilla, Mothra, Hydra or any other that you discovered, has unique skills and special talents and they can become even more destructive by pumping and constantly participating in battles. Your team of monsters not only fight, but also use the terrain, human structures and terrain features, all of which will help to win the battle. Join this fun and addictive game. We also advise you to pay attention to Townsmen and The Ants: Underground Kingdom.

Godzilla Battle Line was released in mid-June 2021. For 10 days, the project has collected more than a hundred thousand downloads with an average rating of 4.2 points.

Each in-game fight lasts a maximum of three minutes. Its essence is as follows: each of the players has Godzilla. When he dies, the battle is over. However, it is very difficult to kill this monster, because it has a lot of vital energy, as well as the most powerful armor. To do this, each of the players has a whole squad of brave warriors and equipment that should help destroy the enemy.

Send many small units to the enemy Godzilla or try to kill him with a flying monster. Don’t forget about the powerful missile strike that will shock any enemy. The most important thing is super-cleverness, capable of inflicting irreparable damage on the enemy. Ultimately, the team whose Godzilla can live longer wins.

As you win the Godzilla Battle Line, you get island maps where you can find new heroes to discover with incredible power or the monster you already have. In this case, you can improve him by merging two identical cards, making the creature stronger and more deadly. Receive daily rewards, participate in tournaments and ranked matches. Demonstrate to your opponents that your team is unmatched and you are the best tactician.

Since the Godzilla Battle Line has a huge number of different monsters and devices to use in battles, all fights in the application are very varied and intense. First, players must act on timing, as because each skill has its own reload time. In addition, you need to collect an impressive battle collection in order to defeat a dangerous opponent. Do not forget that it is not necessary to attack the enemy immediately. It may be best to take a closer look at him first and then make a sharp lunge.

There are three minutes for the fight, and if during this time there is no winner, the application will fix a draw. However, in practice, such situations are rare. In addition, the city where the battle takes place and the local landscape play an important role in fights. Units are often unable to reach Godzilla in a straight line and they have to go around him from different directions. This can be both a plus and a minus for the attacker. In general, player himself chooses whom and where to send. His charges do the rest.

Godzilla Battle Line has primitive top-down graphics when it comes to battles. You will watch all the battles from above, as its scale is not impressive. However, the units themselves have good detailing. The project will especially appeal to fans of this universe, because you can meet many old acquaintances here. In addition, warlike music sounds during the game, but you can easily turn it off with one click.

Godzilla Battle Line is distributed completely free of charge, however there are many advertisements in the project. This is understandable, because the developers are trying to benefit from their application. The commercials appear quite often, which is certainly annoying. To make it easier for you to play, we suggest downloading the mod without ads. It allows enjoying the gameplay without distraction by anything.

Godzilla Battle Line begins with a tutorial, where you need to kill the enemy Godzilla with the help of hints. This is easy to do. It is enough just to follow the prompts and place several units on the battlefield. Then the game restarts and downloads additional files. Please consider this before installing the application, as the game requires more free space on your device than you might think.

Now, only multiplayer mode is available. An opponent is selected for you from anywhere in the world. Of the minuses – a long selection of players. Perhaps this is because of recent project release. Most likely, it will gain popularity over time and the search for rivals will take a matter of seconds. Another disadvantage is the rather long menu loading. It is not clear why this problem arises, as there are no exquisite graphic landscapes in the application.

There is another mode in Godzilla Battle Line – challenges, but it is not available now. Replenishment and pumping of your collection of units is very simple. You just need to win battles, explore new lands. However, do not forget that places in your team are limited, so you need to decide which of the available units is stronger.

Godzilla Battle Line is a simple strategy focused on multiplayer. If you are a fan of the Godzilla universe, then be sure to download this game. If not, then you can still find something interesting for yourself in this project.