Gun & Dungeons is an action game from the famous Miniclip.com studio. This dynamic game invites user to play as a small cube man armed with a machine gun. The rules in this game are very simple – you have to shoot everyone before they shoot you. All locations are square or rectangular rooms in which hordes of enemies are advancing on you. Some will try to kill you with melee, while others will shoot from a distance. Also, do not forget about the bosses and each of them has its own characteristics and methods of attack. Equip your hero, buy improved weapons for him and learn powerful spells. Collect various bonuses at locations to become stronger for a while. Shoot with a ricochet or double bursts. Do everything to complete all missions. We also recommend that you familiarize yourself with Gerand – bent barrels and Merge Animals 3D.

Gun & Dungeons was released in mid-November 2021. The age limit for the project is 7+. 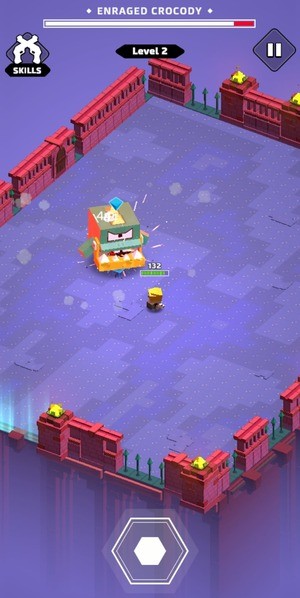 Each level of Gun & Dungeons consists of several rooms in which various monsters attack the main characters. If everything is simple enough in the first location, then in the future you will encounter more and more resistance. A crowd of monsters will attack you. Initially, they will simply step on the user. In this case, it is enough to deftly maneuver around the location and shoot them. By the way, the shooting happens automatically. After that, other units will appear that already know how to shoot, just like you. You must try to kill them first.

When you pass several rooms, you will meet a boss in the last one. The developers of the game did the great job, because they have provided each of the leaders with different looks, as well as different abilities. One of them shoots at the hero with several shells at once. The other accelerates sharply and rams the main character, thereby taking away his vital energy.

Lots of powerful skills available to use

To make playing Gun & Dungeons more interesting, the developers have introduced many different skills and special skills into the project. For example, all skills are divided into three global sections: power, vitality, fortune. Each of these branches has eight skills. You can also improve your hero for a short time during the immediate battles. For this, various bonuses are available that can be picked up from killed enemies. You can find ricochet bullet, napalm, laser attack and more. You can also periodically meet a wise old man who will improve one of your indicators to choose. For example, it will restore the number of lives or temporarily increase the attack level of the weapon. It is possible to obtains some bonuses by watching ads.

To make the fight easier and more convenient, you need to equip your character. You can put a hat, shoes, glasses, body armor and backpack on the hero or buy a pet. Also, do not forget about weapons. The user can pump the guns and choose between different ones. Each of the machines also has its own characteristics and indicators. Some weapons are faster, but less powerful. The other, on the contrary, shoots very powerfully, but slowly.

As mentioned above, project features pixel graphics with a top view. The app has nice sound effects, as well as a wide variety of bosses and common enemies.

You will need in-game currency to upgrade the hero and his weapons. That is why we advise you to download Gun & Dungeons mod APK for unlimited amount of money.

The cult studio miniclip.com is famous primarily for its work called Plague Inc. However, most of the apps in the developer’s arsenal focus on competition in some kind of sport. Here you can see golf, basketball, football, bowling, billiards, and much more. All these sports are directly related to the physics of the behavior of objects, which the studio can recreate just fine. The company used this feature as the main option in Gun & Dungeons. It is very important here to calculate the physics of the behavior of enemy shells and dodge them in time. 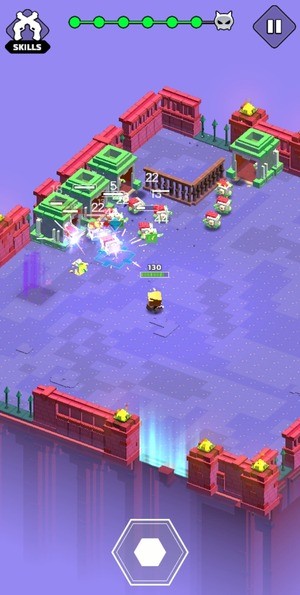 Explore dungeons and fight bosses. Destroy ordinary monsters and upgrade your weapons. Learn new skills to try them on unfortunate opponents and make it so that you come out victorious in this fight.

Gun & Dungeons is a promising new game from a well-known developer, in which the user needs to show accuracy, reaction and ingenuity. The project is ideal for those who like to be challenged by the application.