Gun Head Run is a casual project from the MondayOFF studio. You will become a weapon in this game. Initially, you will only have a regular pistol at your disposal. Overcome the obstacle course and meet various bonuses and targets. Choose what you need. Either increase the amount of ammo, or add another one to your pistol, or get an upgrade and take a new weapon – a shotgun, a sniper rifle, a rocket launcher and more. There are a lot of options, as well as levels in this game. If the weapon is improved, then it will not only shoot more often, but also bring more money. The scheme is simple: more firearms – more earnings. If casual apps are your thing, you can also download Punchy Race and Endless Nightmare 4: Prison.

The project is a few months old, but only the latest updates have managed to stir up public interest on the Play Market. Now Gun Head Run boasts hundreds of thousands of downloads and a confident score of 4 points. 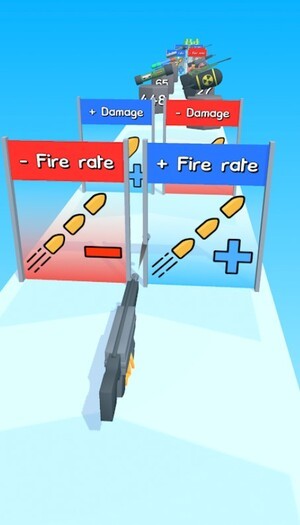 It all starts with the fact that you have nothing and just one gun, which will bring you income with grief in half. It is important to understand here that every shot brings you income and not a target broken into pieces. From this, it follows that each weapon has the following characteristics here: shots per minute and income per shot. Both of these characteristics increase at the same time, so it is only necessary to improve the gun.

Make it with the help of special bonuses scattered around the map. Choose any you like and increase the rate of fire of weapons or the number of your guns. There are also anti-bonuses on the track, a shot at which will take away your strength. By the way, unlike many other similar games, the user can stop and think about their next steps in Gun Head Run. There is no continuous movement here.

Leveling up gives you the opportunity to buy new units of guns. The flight of fantasy of the developers is such that you will meet here both real firearms (shotguns, pistols, revolvers, assault and sniper rifles), and rather dubious prototypes (a water pistol, a mouthpiece, a robot head, a nail gun, a paintball marker, a medieval cannon, an alien blaster). Naturally, the higher the level required to open a new “source of income”, the more money it will bring. 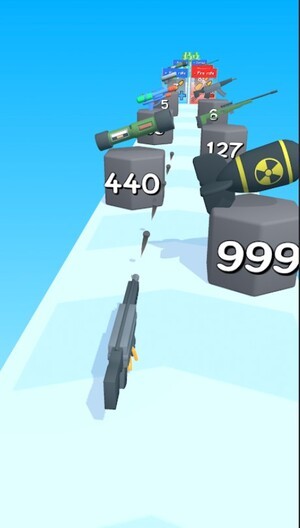 Periodically, the game will give various bonuses. For example, an increase in the rate of fire for a few seconds, a temporary increase in the total income per minute, and so on. There are also bonuses, which access requires you to watch the commercial. Although ads can be annoying, the rewards for viewing are more than worthy.

Threefold increase in the reward for a shot, an increase in the rate of fire of all guns several times, a bonus to experience accumulation dozens of times and so on. Considering that there is no donation in Gun Head Run, then this way of making money for developers is more than acceptable.

So that you do not have any problems with pumping weapons and completing levels, we recommend downloading Gun Head Run mod APK for an unlimited amount of money. 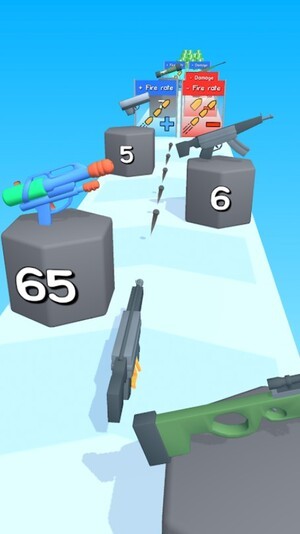 Take any available weapon and start shooting at a variety of targets. Try to hit as accurately as possible, because for each hit you will teach money. Become the one who knows how to handle weapons and show your skills in every test. Unlock new weapons, collect a collection of different items and hone your shooting skills to perfection. Go through numerous levels where you will need to shoot at various targets. Reach the next goal and get a good reward for each completed test.

Gun Head Run is a very simple game where all you have to do is shoot and select the power-ups you need. Complete all levels and unlock all types of weapons.