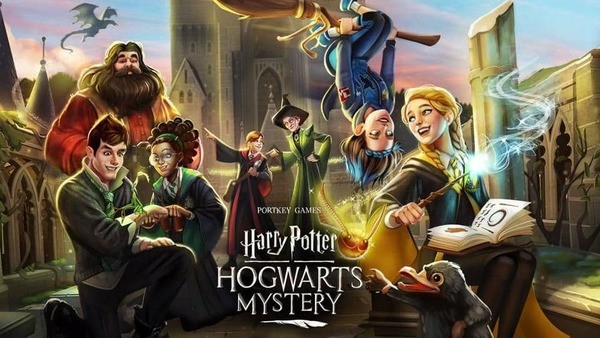 Harry Potter: Hogwarts Mystery is an adventure game set in the same name setting with an independent storyline, interesting gameplay and a familiar world. Go to Hogwarts, but long before Harry Potter appears there. Create your own character and write own story. Find new friends, unravel the secrets of the witchcraft school and meet familiar heroes. Learn powerful spells, brew magic potions, take your place among the wizards and witches of Hogwarts! Take part in Quidditch competitions and lead your team to victory. In the end, explore the vast game world full of secrets and mysteries. Check out also the adventure Don’t Starve: Pocket Edition and Temple Run 2.

Find out the most interesting game features from our traditional review.

Harry Potter: Hogwarts Mystery narrative develops approximately 10 years before the events described in the main series. Play as a character you have created yourself, so you can name it whatever you want. The main character enters Hogwarts after receiving a letter. He or she has a brother named Jacob expelled from school for trying to find some cursed treasure. Now you have to find both him and the treasure, safely hidden in Hogwarts. Friends from the faculty, as well as professors well known to any fan of Rowling’s work, can help you in this. As you progress through, you discover more facts from the Jacob story, learn secrets of wizardry school and uncover a secret conspiracy. 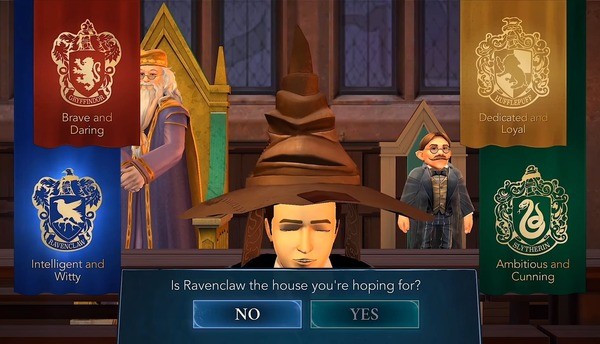 In terms of gameplay, Harry Potter: Hogwarts Mystery is more of an adventure game than an action or arcade. Much of the gameplay is devoted to the relationship between characters, dialogues and search for clues about Jacob’s fate. In addition, your character has to complete tasks in the classroom and practice magic. The story has several chapters, each of which corresponds to a specific year of study at Hogwarts. In order to transfer to the next course, you need to pass quests, as well as exams. Players need to perform different tasks: search for objects, perform magic and solve riddles. In addition to the main tasks, you can simply chat with friends, play Quidditch, complete side missions, get a pet, change your hero’s outfit or simply explore Hogwarts.

Win the Cup for your faculty

Although the choice of faculty has virtually no effect on the course of Harry Potter: Hogwarts Mystery, it is best to do it deliberately. In this case, the Sorting Hat listens carefully to the player to find out his decision. After the user decides on the faculty, he has to win the Cup for him. To do this, you need to earn points by completing tasks and answering questions while studying. The latter are related to the Harry Potter books, so it’s best to read some of them before playing the game. After winning the competition, the gamer receives 100 gems – a valuable currency that is very difficult to collect during the game. 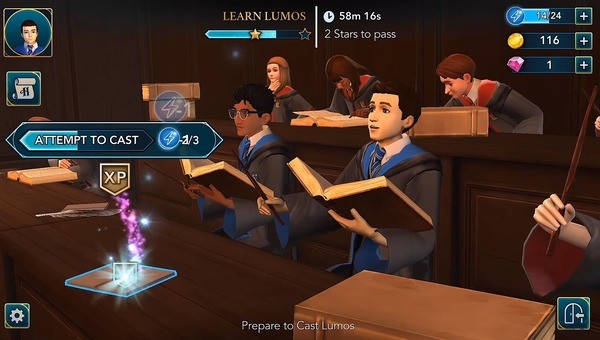 Harry Potter: Hogwarts Mystery attracts attention with gorgeous graphics and stunning sound design, as well as a fascinating storyline and original gameplay. In general, the app has cartoon graphics, which is great for this game world.

Almost all actions in Harry Potter: Hogwarts Mystery require energy. At the same time, completing of any task requires a strictly allotted period. If you violate it, your faculty can lose points, so you have to repeat the quest from the very beginning. Usually, you can obtain constantly lacking energy for a donation. However, you can also use a mod for free shopping to solve the problem with energy absolutely free. 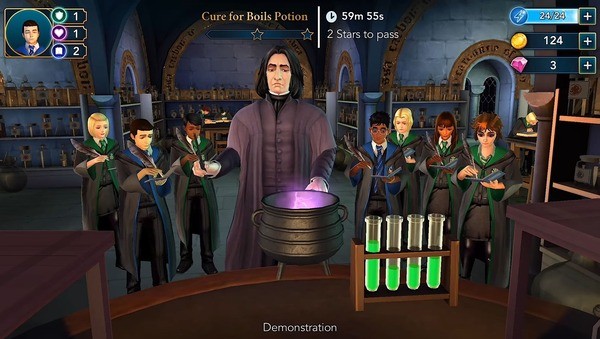 We checked the functionality of Harry Potter: Hogwarts Mystery and mod for free shopping. Based on the test results, we can assure you that everything works fine.  Replenish energy as follows: buy it for crystals, even if you do not have enough currency.

Important! You can get banned for using the mod. Use it carefully, trying not to go through a lot for one session.

In total, installation file is safe. Our team has tested it to exclude the presence of malwares. Just install and launch the app following our instructions below to take advantage of all benefits.

After loading the game, the user has to create a character and think over appearance. Then you need to go to Diagonal Alley and get a wand and textbooks. Meet a new friend named Rowan and indicate your own nickname in Harry Potter: Hogwarts Mystery. Answer Ollivander’s question about his brother to get the wand. Depending on the answer, the hero can receive one of three possible magic items. 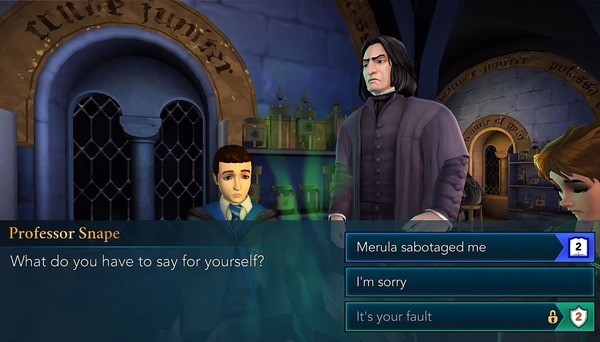 In addition to Rowan, the player can make other friends. You need to communicate with them to make a relationship stronger. This provides the best interaction and helps you progress through the game. Before completing a quest or studying a class, you need to replenish energy as much as possible.

Harry Potter: Hogwarts Mystery is an opportunity to return to the setting well known to most users and enjoy the same feelings player had after reading the books. Immerse yourself in interesting quests, perfectly traced locations and fascinating gameplay mechanics. In addition, our free shopping solution can help you to solve the main game problem – constant need to replenish energy.

Delete the original version of Harry Potter: Hogwarts Mystery before installing our modified version to prevent errors during installation process.