HAWK: Airplane Space is a multiplayer arcade shooter that will appeal to every fan of retro games. As you progress through dozens of campaign missions, upgrade your ship to increase damage and defense. Shoot at enemy chains that appear both in the air and on the ground and fight huge bosses that take up almost half the screen. One of the distinguishing features is the presence of a cooperative mode, which means that you can go to raids with friends or random people. Dynamic air battles, endless game mode, attractive graphics and easy control clearly distinguish the arcade from similar genres. If you like shooters, then also download POLYWAR and Stickman of Wars: RPG Shooter. 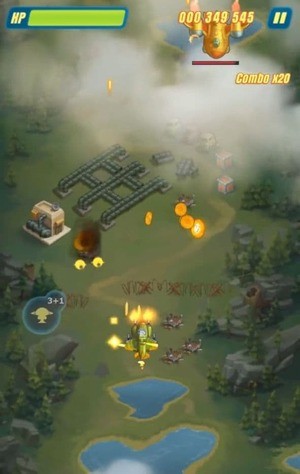 Go through many different levels in this long but entertaining game. To explore the skies with your friends, read our review of HAWK: Airplane Space.

All levels here are diverse. We will gradually meet more and more new enemies. The battles themselves are quite dynamic and do not allow you to relax for a second. You will be constantly under a barrage of fire. Sometimes you have to dodge various obstacles. Boss battles also turned out to be interesting – they are moderately difficult. Fights with them take place in several phases that are radically different from each other. If the normal difficulty is too easy for you, try the higher one, where the boss fights will be a challenge for you.

HAWK: Airplane Space also pleases with an abundance of game modes. There is an arcade mode in which you need to hold out as long as possible. There are special cooperative missions in several phases, and peaceful levels in which you just have to maneuver correctly. Enjoy plenty of activities for a mobile free game, especially since developers designed HAWK for 1-2 hours a day.

Cruel aliens decided to attack the planet. As a result, the best-hired pilots from literally all over the globe went to protect civilians. You must enter into an unequal battle with numerous enemy forces attacking from heaven and earth.

You can resist numerous enemies together with your friends. At the same time, coins begin to fall out of the defeated aircraft, tanks and other military equipment. Use it to improve your fighter. The player enters into an exciting boss fight at the end of each completed level. 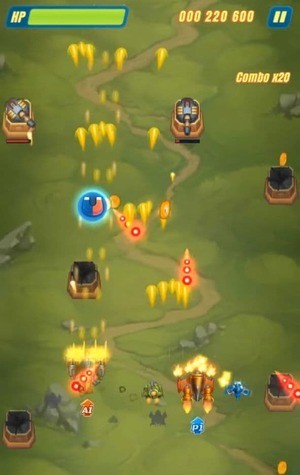 HAWK: Airplane Space requires active and decisive action. In the process of completing sixty missions, you will be able to use different tactics. There are different models of aircraft and large number of guns to equip with aircraft in order to repel the attacks of enemy military equipment. Convenient controls and simple rules will make participation in a virtual war especially exciting. Different battle scenarios are available to the commanders-in-chief.

The game features a bright graphic style, which turns the ongoing events into part of a virtual competition. Players also appreciate the sound in HAWK: Airplane Space – it is quite realistic.

We invite everyone to use the mod-menu, which allows you to adjust the attack and defense indicators of your aircraft.

HAWK: Airplane Space invites phantoms of hurricane dogfights to unite and set the heat on the tyrant and his armadas. It would be complete madness to face such a large army alone. Use support of true friends to cope even with such a formidable enemy. A unique system of cooperative battles allows you to join forces and react with lightning speed to the movement of the enemy. However, you can still start with the career mode. Here you have more than 170 levels, during which you will be able to master all the equipment and develop your military strategy. 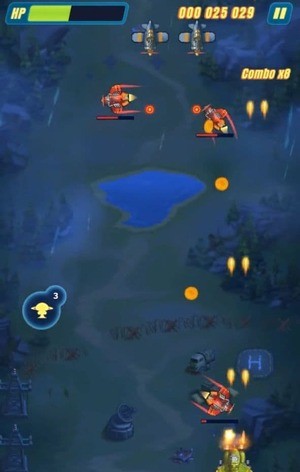 Get access to extensive collection of aircraft and equipment with unlimited money mod. The authors have collected all the samples of military-technical progress and you can try each of them and if necessary, upgrade. Multiple types of aircraft, lasers, cannons and rockets await you in this action game, which is difficult to navigate due to the wall of flying bullets.

The authors also took care of several additional game modes. These arcade, assault and squad radically change the usual gameplay. You will find huge bosses, the victory over which is not so simple thing. Do not discount their many assistants.

HAWK: Airplane Space is an opportunity to become a real hero, capable of feats in the name of the common good. Take to the air and take part in the most intense combat duels of the century.