Helicopter Escape 3D is a dynamic and very epic shooter where you have to rescue hostages from the clutches of insane zombies. Embark on a deadly mission where you are required to shoot the villains chasing the victim. Continuously fire on enemies, not allowing them to catch up with the person. There will be a whole crowd of opponents, so blow up the red barrels while watching the cinematic footage. Do it carefully, as escaping person should not die. Once he is on board the helicopter, you go to the next level. Spare ammunition, because the bullets are endless here, so kill every enemy and earn money to unlock more weapons and items of equipment. Get ready for hot gunfights by playing this time-killer, where action-packed levels and simple controls will delight you. We also recommend downloading Chicken Gun and Jackal Squad.

The application has more than 10 million downloads, as its average rating is 4.4 points. This allows us to speak about the project quality and the fact that it is in high demand among users.

Helicopter Escape 3D invites you to play the role of a rescuer who will fly in the helicopter to the very epicenter of crazy events, where ordinary people somehow ended up. Someone will constantly chase them, in particular – they will be zombies that want fresh flesh. Your task is to save the inhabitant at any cost! Therefore, you need to move to your weapon, which gradually open to you, and start shooting the enemy. To make it easier for you, as soon as you switch to the weapon, the time will slow down, which allows you to better aim and start fire. Save and get cool rewards, as well as money that you can spend on any of the improvements or the acquisition of new weapons. It will allow you to save civilians effectively! 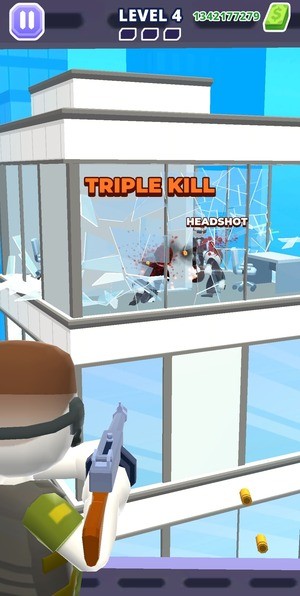 Interact with objects for effective destruction

Inventive in Helicopter Escape 3D is such a shooter, one shot of which can lead to the elimination of several targets at once. To do this, you need to interact closely with your surroundings, trying to destroy support beams, fuel barrels and glass partitions. If you do everything correctly, then many of the local levels you can pass, spending only a few cartridges. Enemies here are not very diverse. Little people will move around the map without any special purpose. Some of them carry various items that can protect the carrier from direct hits. Most often, you may come across porters holding barrels of explosive substances. A powerful explosion here is one of the most effective methods against groups of enemies.

Player starts the adventure in Helicopter Escape 3D with only a pistol that shoots one round at a time. A highly ineffective weapon gives the player little chance to show their best skills. However, over time, you will be able to unlock other guns as well, such as a shotgun, submachine gun, Kalashnikov assault rifle, Thompson, duals (two pistols) and others. Each weapon has a different power and rate of fire. If you shoot one bullet from a regular pistol, then an assault rifle will allow you to carry out whole lines at enemies. In addition, the player can change his equipment – hats, top and bottom. This only affects the appearance of the character. New clothes do not give any bonuses, but it can distinguish your hero from the background of others.

Helicopter Escape 3D presents a colorful and well-animated game world, where the main characters will be familiar stickmen. The graphics are at a high and decent level, which makes it a pleasure to play. Special effects are rich and vivid, both visual and sound. Therefore, you can immerse yourself in the atmosphere and experience all those inexpressible emotions.

After passing the levels, the game offers you to buy one of two types of weapons to choose. Alternatively, both at once. Each cannon may cost you several hundred dollars. There will always be a shortage of money, but you can download Helicopter Escape 3D Mod APK for unlimited money to buy any weapon as soon as the opportunity presents itself.

Helicopter Escape 3D is a real time killer that represents several genres at once. This is not just a shooter, as it includes arcade elements. The developers matched game mechanics accordingly. Therefore, there is no focus on multiplayer here. You have to try on the role of a real killer. You have to shoot mainly from rifles to save the hostage or just kill all the bandits. It would seem that what could be simpler. However, you cannot even count on a simple passage. The game unfolds from unexpected side for many. First off, you do not have such great weapons, especially at first. The enemy will not stand still, meekly waiting for you to shoot him. Only the most attentive and judicious will be able to complete the game from start to finish. 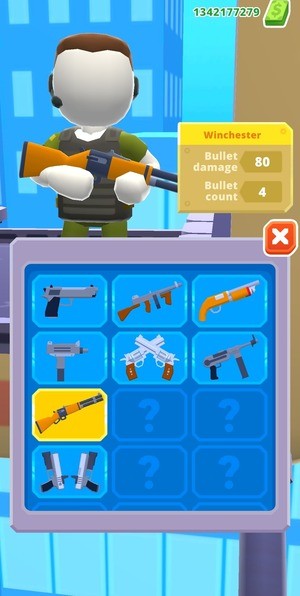 Don’t forget to periodically upgrade your rifle. Otherwise, you will show the worst result, and this reduces the amount of earned currency. You need it to pump and open new trunks. There are more than 10 types of firearms in the project, as it is worth trying at least half. The best shooters go to the very top of the tournament table. Do not forget that the Helicopter Escape 3D project is up to ultra-realistic shooters with full details. This is a casual game. It is suitable for a fun pastime, nothing more. Dynamic firefights, mesmerizing landscapes and a whole bunch of different items. All this perfectly complements the atmosphere of the arcade shooter.

Helicopter Escape 3D is a fun project with simple controls and addictive gameplay. Due to the lack of realistic scenes of violence, the game is easy to perceive. It will suit even teenagers. Even a beginner will not be difficult to understand the gameplay. Rescue the hostages and destroy all the bad guys.