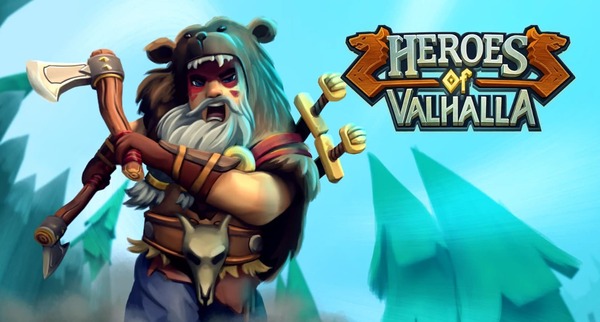 Heroes of Valhalla is a strategy game from Games Station Studio. Perform several functions at once. First, you need to rebuild your city, build various structures there that will help you attack. Next, you need to get brave heroes and pump them. Get them from special chests that you open during the game. In the end, go into battle, defend your castle and place the heroes around the territory so that they can inflict maximum damage on the enemy who will attack in waves. There are several relevant tasks at once and it will not be so easy to cope with this. For strategy fans, we recommend Draw Castle War and Rush Arena – Tower Defense.

Heroes of Valhalla is a multi-faceted game with many features. You can find out more in our review.

The gameplay of Heroes of Valhalla is rather unusual. With its versatility and richness of possibilities, it is able to scare away gamers who are used to standard games of the “tower defense” concept. After overcoming all the difficulties that may accompany you at first, you will definitely not be able to tear yourself away from such exciting battles. It all starts with getting to know the castle.

Here you will see a small area where all your key buildings will be located. There are buildings here that specialize in the extraction of useful resources. Gold mines and mills will become your faithful companions, because to maintain a large and strong army, you simply need food and gold reserves. Take care of the place of hiring troops. Create all these buildings. You can speed up the construction for crystals – the in-game currency.

Hire heroes and upgrade them

Playing Heroes of Valhalla does not mean constantly fighting. This application focuses on elements from the popular RTS project. It is important to develop the economy of the settlement and increase the amount of profit. Construct new buildings that can accommodate a large number of residents and, accordingly, soldiers to protect them.

Also, pay attention to buildings that extract valuable resources for regular progress. However, do not forget about the army, which needs brave heroes. Such characters inspire their soldiers and increase morale. Constantly hire and improve the skills of heroes. Characters can use special skills. Upgrade them to become stronger.

As soon as you form the army, you can go outside the castle and take part in epic battles. Be ready to prove his superiority or his own insignificance. The storyline offers many levels, each of which you expect more and more difficult tests. As combat units, players can use about two dozen different soldiers.

This helps to increase combat power to make quick raids on daring neighbors and defend yourself. The army will require a separate hero, who must have magic spells or combat techniques. Warriors will follow such a commander even to death.

The essence of the gameplay is the systematic development. Participants gradually build infrastructure, protective and industrial structures, collect resources and explore new characters. Then you go to battle. You will not only construct buildings one by one, just to get access to slightly higher-level troops. It is important to think over the defense in advance. During the battle, your generals gain experience and can learn new skills. Plan your defense carefully, don’t waste resources and try to develop your kingdom comprehensively. Otherwise, you risk to stay without it at higher levels.

Heroes of Valhalla is an interesting game with many mechanics. Rebuild the village, hire heroes and defend the castle by placing towers around the perimeter.