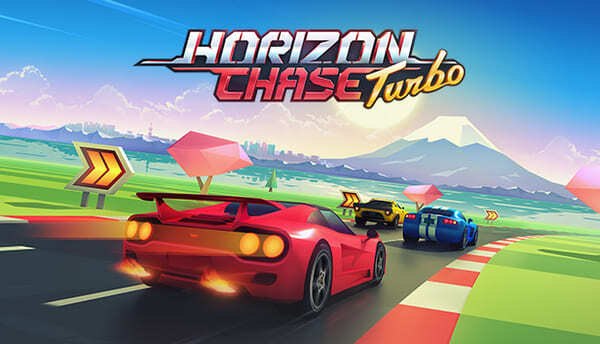 Horizon Chase is a great arcade racing game inspired by retro projects such as Out Run, Top Gear and Lotus Turbo Challenge. Eight different tracks are waiting for you where you can show all your driving skills and enjoy the speed to your heart’s content. Earn money for each victory and improve the performance of your swallow or get yourself a faster car. Essence of the game is dynamic races along winding tracks on iconic cars from the automotive industry, games and movies. The kit comes with adrenaline chases, high speeds and a driving soundtrack. If you are into racing, then also download 3DTuning and Tuning Club Online.

We advise you to read our review to find out all the details about the game.

Horizon Chase has incorporated all the most distinctive features of retro racing. The camera is located directly behind the car and does not change its position, creating the feeling that the player himself is driving along the track. In turn, the road and the surrounding landscapes resemble conveyor belts rushing past cars. Sometimes you wonder what is actually moving: a car or a road under its wheels.

Races take place at high speeds, which means you need to know about the turns in advance. To do this, use arrows on the roadsides: blue ones indicate a simple turn and red ones indicate a sharp one. In addition, there are unexpected obstacles on the roads, which require lightning-fast reaction and excellent vehicle control to avoid them.

The gameplay of Horizon Chase focuses on the described mechanics. The tracks are made very cleverly so players have to memorize them. Sharp turn in the opposite direction follows a protracted ring. Boulder will appear on the road at the most unexpected moment, and the most difficult thing is the narrow route sections. Coins are often in inconvenient areas and you have to try hard to collect them all.

Races in the game are circular with opponents controlled by AI. Opponents may go too fast if the player is ahead or loses speed when they fall behind. Thus, you will feel the tension until the last turn. Player or opponent can make a mistake at the cost of victory at any moment. However, do not ram your opponents in no case. Cars bounce off each other like rubber balls, losing speed in the process, so aggressive driving is contraindicated.

Horizon Chase fleet includes 35 units, among which there are many popular brands: Dodge Viper, Lotus Esprit, Bugatti Veyron, Toyota Trueno AE86, etc. Cars differ not only in models, but also in characteristics: maximum speed, acceleration, handling, fuel reserve and acceleration from nitro. Due to the difference in parameters, cars behave differently, but no one forbids you to go through all the races on your favorite car.

Graphics of Horizon Chase are simple but beautiful. The developers competently approached the visual design of each country in order to convey its spirit and style. Against the background of the races, you can see the sights (Taj Mahal and the Acropolis) or just beautiful landscapes by which you can guess race place. Snowy roads of Iceland or kangaroos in Australia. Great music complements the retro atmosphere. Musical instruments sound like 8-bit, but still represent a new modern approach. Twenty original compositions are great for the game and do not get bored after a hundred repetitions.

We offer you to download the mod that unlocks full version of Horizon Chase. In addition, you can get all skins unlocked.

Horizon Chase is a dynamic adventure that will appeal to those who want to experience nostalgic feelings. The concept, design style, graphic solutions in this application are the same as in games created for game consoles in the 80s – 90s. Unless there are much more opportunities for adrenaline here. Innovative technologies allow gamers to plunge headlong into the world of drive, risk, records and excitement.

In a colorful virtual story that make every brave participant a hero, truly exciting events take place, and victory is a reason to be proud of your skill. The game offers an extensive collection of cars with possibility of tuning and making technical changes. Retro style used in this application gives the game a unique originality and allows fans of high-speed competitions to experience vivid emotions.

Addictive gameplay and original graphics make Horizon Chase stand out from other arcade games. We recommend it to all fans of the genre.