Hotel Transylvania Adventures is an Android adventure platformer based on the movie of the same name. Mavis has released cute but rather dangerous wolf puppies and now they roam the huge hotel of monsters, causing chaos and destruction. Help her run and jump through various traps to find all the puppies and thus prevent further damage from them at the hotel. The gameplay itself is as follows: you, controlling the character, run forward, jump over monsters and traps until you reach the end of the level. However, be careful, the hero does not have many lives and if you waste them, you will start over. Also, collect coins to renovate the hotel and buy additional decorations. Download other arcade games as well, such as Like A Dino! and Evil Nun Maze.

First, this is an interesting adventure for fans of the cartoon Hotel Transylvania Adventures. However, this game may also be useful to other users.

Play as your favorite characters

Mavis mistakenly released the cubs, which made a mess in the hotel. Aunt Lydia is furious, and the young vampire faces house arrest. Now she has to go through various levels to find pranksters and collect coins to repair damaged rooms. You have a great opportunity to play not only Mavis, but also other favorite characters – Hank, Verdi or Pedro. Each of them has own skills, such as double jump or killer burp. You will be able to control funny monsters, complete difficult tasks, avoid obstacles and get rewards. You can unlock Hotel Transylvania Adventures characters gradually or all of them with the help of diamonds. Due to the great popularity of the heroes, the most famous are dozens of diamonds. Gold coins make it possible to increase the level of heroes. 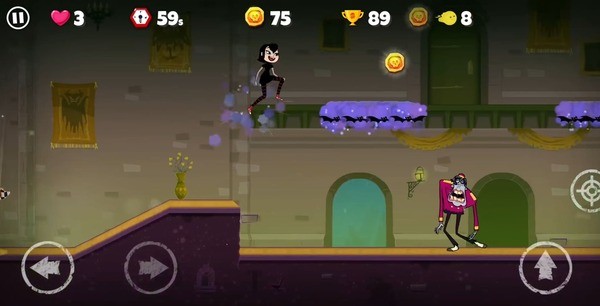 The hotel is full of scary monsters to avoid. Renovate all new rooms, collect coins and get ready for a boss fight. The hotel keeps many secrets. Explore the world and learn a lot about its inhabitants.

Hotel Transylvania Adventures is an addicting mystical platformer. The protagonist has released small cubs, which are scattered throughout the hotel. Mischievous pranksters caused significant damage to the building. You must go through the levels and restore each room. Use also various coins scattered across the levels. Collect coins and get rewards. You must avoid various obstacles and monsters on your way. The hero can unlock up to four playable characters, each with their own unique appearance and gameplay features.

Avoid enemies, traps and all kinds of creepy things

It is worth collecting everything that comes along the way at Hotel Transylvania Adventures, because nothing on the farm is superfluous. You can start collecting coins that come across on the way, intended for the purchase of various bonuses. They accumulate all over the company. On locations, you can often find a variety of amplifiers that allow you to move the hero to victory. If we talk about the game rules, then everything is simple. Above there is a special timer that helps you navigate when the task is completed. If you do not have time to finish on time, then you need to start passing the level again. 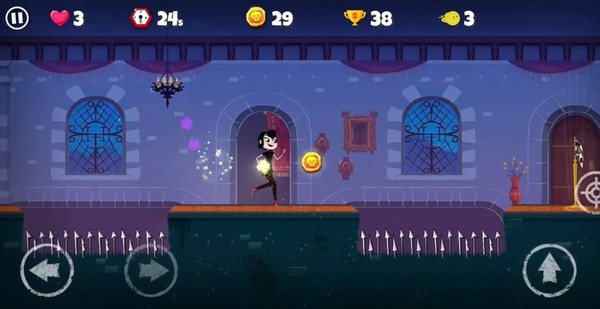 The creators decided not to change the gameplay much, but added several types of updated traps, which at first glance look quite harmless. In addition, dangerous monsters, disappearing platforms and acid pits will await you. You will not be bored.

The 2D platformer Hotel Transylvania Adventures has hand-drawn graphics and beautiful animations. The gameplay is quite simple and convenient. You need to jump from platform to platform, avoid dips and cracks, as well as dangerous enemies on each level. Some levels include fast bosses to fight. Use all your ingenuity and ability to defeat enemies. Each monster has an original appearance and complex animation. Adversaries appear in different places, which contributes to the effect of surprise.

To make it more convenient for you, we suggest downloading Hotel Transylvania Adventures mod APK, which opens access to a special menu. With it, you get the features of God Mode, One Hit Kills, Unlimited Ammo, and Unlimited Money. At any time during the game, the player can turn off any of the cheats if he gets tired of it. You can also re-enable the mod at your convenience.

Our team has conducted several tests to check the mod safety. You can use it without fear for your device.

The developers of Hotel Transylvania Adventures have tried to create a high-quality modern product, which contains many exciting tests that test the manifestations of ingenuity, reaction speed, and concentration of attention. You will be impressed, because during the conquest of the process, many difficult obstacles will be encountered, represented by a variety of interesting objects. Among all the variety, you can see all kinds of acid pits, terrible creatures, sharp and powerful thorns and much more. Move forward exploring all kinds of loopholes in each level, trying to solve all the mysteries. 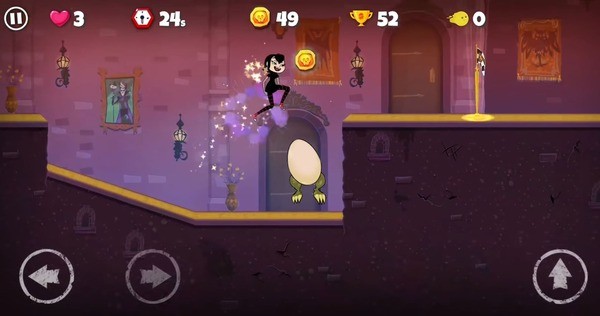 You are required to change the landscape. Come up with new ways to overcome obstacles, move objects and much more to solve many problems. This is necessary in order to get to the end and find the wolf puppies. As soon as you manage to get them all and reach the finish line, you will be able to complete the passable stage. After the level is completed, receive a generous reward. Do your best to become the best player in this game.

Hotel Transylvania Adventures is a very entertaining platformer that can captivate gamers of all ages. Colorful graphics, exciting levels and tricky traps – all this gives the project a special charm.