Human: Fall Flat is one of the representatives of Low-Poly trend in the gaming industry. The visual part, made in this style, fits the game almost perfectly. The reason for this is quite simple: action in the game takes place in protagonist dream. Bob’s dreams are very, very strange things. Each location of the world of dreams is a kind of sandbox in which you can interact with almost anything. Problems with opening the door due to a padlock? Just break the lock with a stone. Does the glass wall block your way? Firstly, why is it standing here, and secondly, you can simply brake it by almost any object that lies nearby. Cars, bogies, levers – all of this is prepared for interaction. If you like challenging puzzles, we can also offer you to download Criminal Case and Stickman Ragdoll Fighter.

For many indie games, one hundred thousand copies sold is already an outstanding achievement. However, Human: Fall Flat has a cumulative circulation of over 25 million! In the mobile segment, it is the fastest-selling title in history.

The game takes place in the imagination of the protagonist. He, as well as his co-op partners, has to go through themed locations – a medieval castle, an Aztec stronghold, a power plant, a neon city and other inventive worlds. Fantasy has no boundaries, which means that anything can happen in Human: Fall Flat! Even a fall from a height will not become fatal – it is impossible to die in a dream. 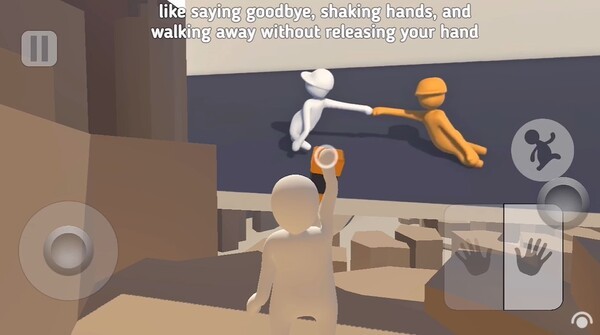 You have to control an extremely awkward character. He moves with difficulty, constantly stumbling and dancing – what can we say about performing more complex tasks! Nevertheless, in order to get to the exit from the location, you have to complete tests and solve puzzles.

The gameplay of Human: Fall Flat is a lot of fun. Yes, you probably won’t even be able to grab onto the object from the first try, but this is the whole fun – you can’t help but smile watching how the little man plops to the ground, stumbling over a bump.

There are many mechanisms available in the game, including cars that you can drive, levers that you need to press, catapults that you can charge the main character into, and many other objects to interact. There is no shortage of interesting puzzles here, and many of them have different solutions – it would be smart enough.

This project, in principle, is not very suitable for a solo passage. You won’t necessarily get bored, but playing solo will lose the lion’s share of the fun compared to co-op. Human: Fall Flat has local (split screen) and online (8 player) multiplayer and it’s incredibly addictive! Push and interfere with each other, swear and try to get to the goal through a series of failures and ridiculous falls.

Customization of characters helps to make your avatar different from others. Ready-made costumes and various elements of clothing are available in the game. Use them to transform the character appearance. In addition, you can draw any picture directly on his body.

Human: Fall Flat is available on a wide variety of platforms, from PCs and consoles to mobile devices. Each of them has its own unique chips. For example, PC supports the Steam Workshop, in which players create own maps, character skins, adventures and share their work with the community. On mobile devices, the game supports touch control, with which the characters become even more awkward! 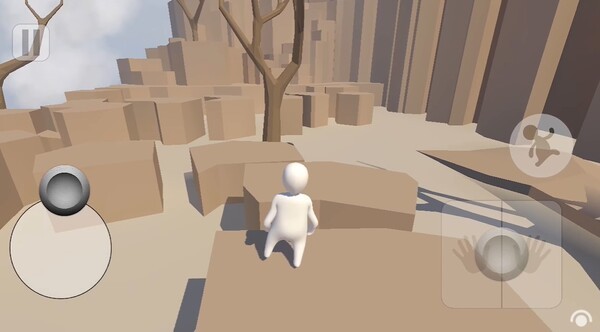 The choice of millions of players

Digging into the physics puzzle section, you will find many projects similar to Human: Fall Flat. For example, Octodad: Dadliest Catch or Surgeon Simulator. These are good games, but they cannot give you as much fun as the creation of No Brakes Games team can deliver. Enchanting adventure somehow manages not to annoy even after the hundredth failure.

Human: Fall Flat features low-Poly style, which makes the whole environment seem rather unsightly. Yes, in fact, there are many curved objects in the game, as the same stones look very strange. Moreover, do not forget that you are in the world of dreams. The game cannot boast with a colorful picture. The sound component also has the highest level and does not distract from the main immersion in the gameplay.

Given that the game costs a large amount of money in official sources, not every user can afford to buy it. We offer you to download a mod that opens access to the game free. Enjoy unlimited puzzles.

Bob in his dreams moves like a tumbler. He is constantly leaning one way or the other. The main character is almost unable to walk in a straight line. It immediately catches your eye, but you forget about it after a few minutes. The most interesting part of the control is in the hands of Bob.

The thing is that, like in Grow Home, you can control Bob’s hands, and at the same time grab onto any surface. Speaking of surfaces: if you cannot jump onto a platform, then just grab the edge with your hands and then direct the camera’s gaze downward. Thanks to these manipulations, Bob can easily climb the highest peaks of the Human: Fall Flat world. 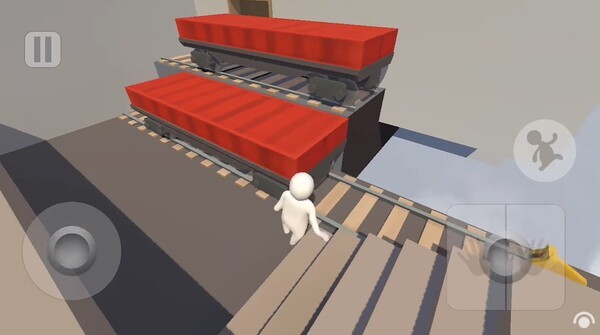 You can carry objects here in two ways: drag them along the ground or carry them on your hands. In the latter case, you need to grab the object and direct the camera’s gaze upward. You quickly get used to such a system and no longer notice any flaws. One of the advantages of Human: Fall Flat is the non-linear passage of locations.

The paths are strikingly different from each other, and some of them are quite difficult to notice at first glance. Moreover, there are also such paths in the locations that lead to dead ends. If you climbed upstairs for a long time in search of the cherished door to another dream, then it may not be there easily. In this case, the passage of individual sections also differs in time. Somewhere you need to jump long and hard on small ledges, although if you go the other way, you can jump over the abyss on the rope in a couple of seconds.

When trying to build an impromptu bridge for yourself from planks, it is important to remember that by grasping one end of the log, the other will pull you down. What is most interesting, despite the strange style of movement and no less strange controls, you get used to it in a matter of minutes. The laws of physics, as you know, are relevant in the game and it is great.

Human: Fall Flat hides an interesting control idea behind its graphic minimalism. This idea, as well as the puzzles, is only enough for one playthrough. The most offensive thing is that it is difficult to see all the gameplay features conceived by the Lithuanian developers. Some puzzles have several solutions and some of the levels boast detours to the finish line. There is still an incentive – a set of trophies. The only catch is that not everyone is interested in them.