Hungry Shark Evolution is an entertaining action game in which you have to play as a deadly shark. Explore not only the depths of the sea, but also land, where unsuspecting prey also lurking. The shark food chain in this game is not as simple as it might seem. Yes, you will have huge jaws, superpowers and other things, but you also need to hunt. Larger predators, armed people, mines, traps and other obstacles will give you many problems if you are not careful during the hunt. The shark is small at the beginning of your adventures, but it will grow up and become a real threat to shallow inhabitants of the deep sea during the game. Just swim and eat all living things until it becomes huge. We also recommend downloading Sonic Forces and 60 Seconds! Reatomized.

Hungry Shark Evolution already has over a hundred million downloads, which is a sign of great success for the publisher. The number of positive reviews has almost reached six and a half million, and the rating itself is 4.5 points.

Choose from different types of sharks

Hungry Shark Evolution meets you with a large selection of sharks and improvements for them. Actually, this is where the whole gameplay begins. Before hunting, you need to decide on the choice of predator, who will wreak havoc on underwater and terrestrial world. The variety of sharks is amazing. Choose between both well-known species (white shark, hammerhead shark and others) and fantastic sharks that are real only within the framework of the game (robot shark, fire shark and others). 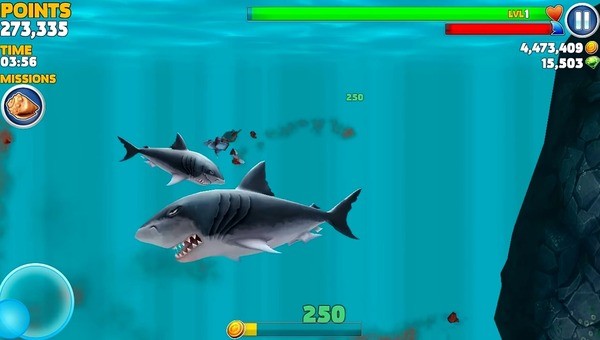 Predators differ in appearance, animations and methods of killing prey. Classic predators simply overtake their prey and eat them with powerful jaws. More exotic species, for example, shock victims, burn them with fire (yes, fire under water) and chew with mechanical jaws.

As mentioned earlier, Hungry Shark Evolution has a impressive selection of a wide variety of sharks. Meet both real and fantastic marine predators. They differ in size and characteristics. In total, we can consider three main characteristics:

Each characteristic is available for upgrades separately, but it is worth paying attention that it will be better to improve everything evenly. Bite force is useful in later stages of the hunt, when serious opponents begin to attack you. You can eat some enemies the first time, but some bathyscaphes require several attacks. It is worth noting that your predator has a health bar that gradually decreases. You need to eat constantly to restore it. Many places rich in wildlife are located far enough from your starting point, so you should always monitor speed indicator, because you have to travel a lot.

Hungry Shark Evolution provides players with various attachments to the shark’s body. In addition to a deadly laser, a rocket launcher and other arsenal, you can attach a jetpack, a spacesuit and other interesting gizmos. If everything is clear with weapons, then other devices allow you to get to the surface, soar in the sky and even go into outer space. It sounds a little strange, but it will be fun.

There are also cosmetic items here, for example: Santa Claus hat, witch hat, pacifier, helmet, navigator, various hairstyles. All these elements are not only decorative, but also provide certain passive bonuses. Decorations allow the shark to swim more actively, bite prey harder, get satiated faster and withstand more attacks from other underwater predators. Sort out all these bonuses to reach new heights. 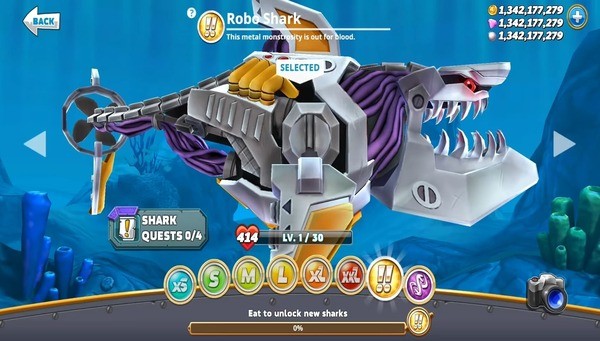 After choosing a shark and improving it, you get into the water, where the feast begins. At first, you can eat small fish, plankton, jellyfish and other harmless seafood. After several stages of pumping, you will be able to eat smaller sharks, annoying scuba divers and wreck ships. The game world offers you to ride not only under water, but also on land, where tourists are serenely resting on the beaches. Even the most fearsome predator must be careful in the depths of the sea. Here you can come across deep-sea mines, submarines and other unfriendly elements. If you are ready to meet them, then be sure to prove your superiority.

The game has many advantages and qualities. For example, the presence of 3D graphics. It gives the effect of reality and players can completely immerse in the world of adventure. The project also features funny music that will not let you get bored.

One of the most tangible disadvantages of Hungry Shark Evolution is the shark price. You need to pay a tangible amount of in-game currency to buy a new character. In order to save you from these problems, we suggest using the mod for unlimited amount of gold coins and jewelry.

In addition, the application has a special mod menu, where you can activate the following improvements: immortality, high damage, unlimited gold rush and stamina. Just click on the round button in upper corner of the screen to activate these cheats. Important! Turn on enhancements before starting the game for everything to work correctly, not during the adventure.

The big advantage of Hungry Shark Evolution is a large selection of sharks, so the player can choose any. There is a huge underwater world, where various fish live, which the shark can hunt, as well as treasures with bonuses. The game is simple in meaning and easy to control. Assumes the completion of 75 tasks, when performing them you can equip the shark with special devices. 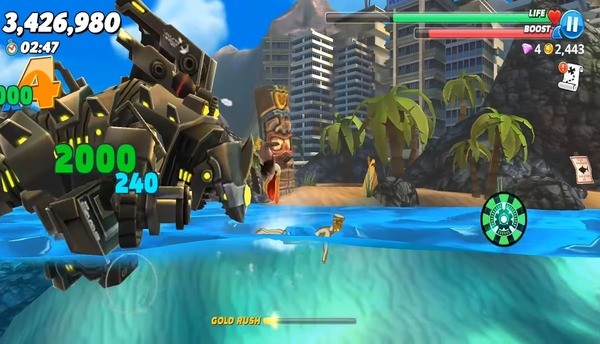 There are baby sharks in Hungry Shark Evolution to enhance instincts, just like in real life. Earn bonuses for completing missions, including Gold Rush bonus, which allows you to beat and set new records.

We would like to note that developers of Hungry Shark Evolution regularly update the application and add new content. Therefore, the game is constantly evolving with no restrictions. The gameplay is understandable for both adults and children. You need to find a victim and escape from various enemies.

Hungry Shark Evolution is a cool arcade game where you can try on the fins and teeth of the most dangerous sea predator. Control sharks and devour everything that you meet on your way, fight other dangerous inhabitants of seas and oceans.