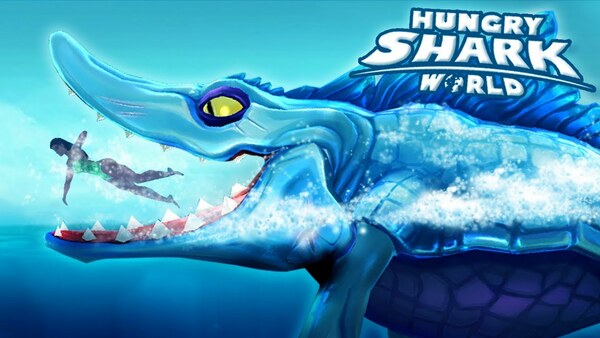 Hungry Shark World is a fun and addicting arcade game from the developers of Ubisoft. Play as a shark that explores the sea in search of prey. Explore endless locations, upgrade your shark and discover new sea predators. Go for a free swim and eat a couple of gaping tourists or smaller fish for lunch. Your main task is not to let your shark starve, so you need to look for food constantly. You can’t hesitate, because hunger is getting stronger, and prey can be nimble, so it’s not so easy to catch it.

Meet with hundreds of representatives of marine fauna, hunt people, cuttlefish, crayfish, but be careful! Some of your neighbors in the water can make you desperate resistance and even kill you, because no one wants to be eaten. In addition, it is important for the player to calculate the strength and speed of the shark correctly so as not to accidentally jump onto the shore – it will be extremely difficult to return into the water.

Ubisoft – company that makes almost no bad games produced Hungry Shark World. Read on and we will tell you about the main features of this product.

More than 30 types of sharks

All sharks in the game we can divide into eight species, from the smallest to the giant ones. Start the game as a small reef shark and then discover new species such as megalodon, radioactive shark, killer shark, zombie shark, robot shark and even magic shark. Each of them has its own unique design and parameters of speed and maneuverability.

In order to facilitate hunting, you have pets at your disposal that give buffs to the shark. Use the help of a kraken, which can swallow dangerous jellyfish that can sting a shark, or take a mini-shark as your assistant, gaining an additional 25 percent to health.

Equip your shark with a jetpack or powerful laser

Not only pets can help you in the struggle for survival in Hungry Shark World. All sharks have powerful jaws and lightning speed, but sometimes the prey escapes at the last moment. In order to prevent this from happening, you can plant a laser on your character or put on a jetpack on him, which allows you to fly high in the sky and grab prey even on land. If you are concerned about the health of the shark, then choose a force field for maximum protection from mines and projectiles.

Hungry Shark World allows you to equip a shark not only with weapons, but also with various things that look stylish and also give some bonuses. Equip a warrior’s helmet for a bonus to damage resistance, or equip the shark with a king’s necklace for an additional eight percent health.

The scenery of your adventures changes as you progress. Your shark can hunt both in the picturesque warm waters of the Pacific Ocean and in the permafrost of the Arctic Ocean. Depending on the location, the local fauna will also change, so you won’t see a penguin in the Arabian Sea, but you won’t see a thermophilic sturgeon in the Arctic either.

As the campaign progresses, the game gives you tasks, you need to complete. There are more than 20 types of epic missions in Hungry Shark World, including hunting for a specific victim and battles with powerful bosses. Each has its own strengths and weaknesses, so think carefully about your attack tactics. 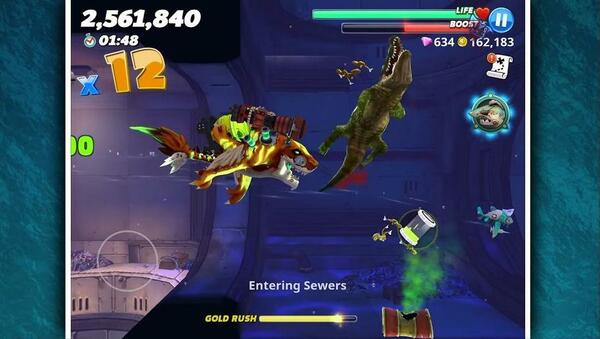 Hungry Shark World offers colorful 3D graphics that some desktop games would envy. Developers carefully designed and executed all sharks beautifully, but at the same time intimidating. The same we can say about the environment – there are dozens of models of people, not to mention fish and other inhabitants of the deep sea. By the way, there is blood in the game, but you can turn it off in the settings. So even small children can play it and won’t see any scenes unacceptable to them. Enjoy high-quality sound effects – people screams, sounds of prey consumed by a shark – all sounds are very realistic.

Hungry Shark World is free to play, although you need diamonds to unlock new sharks and their upgrades, which players usually buy for real money. However, you can download a modified version of the game and get an infinite amount of money and diamonds on your account. Thus, you can immediately open all 33 types of sharks and buy weapons, artifacts and pets for them.

We played Hungry Shark World for our visitors. The game works without problems, the mod is also safe and stable. Just start the game and immediately receive unlimited money on your account. Thus, you can take full advantage of the modified version right after the first launch.

The game controls are simple and carried out with two fingers. With one hand, you set the shark movement, and with the other, you attack. The entire map in Hungry Shark World has three zones – green, yellow and red. Green zone allows you to safely hunt without encountering any enemies. The only danger is hunger that you must satisfy immediately. In yellow zone, you may come across giant ocean dwellers, such as a whale or a larger shark. Finally, red zone boasts of underwater volcanoes and military submarines that strive to kill you. The map itself is initially a little open, to find out more, you need to explore the area or buy the entire map with coins. There is also a function of showing chests and other interesting objects on the map, which you can buy for game coins. 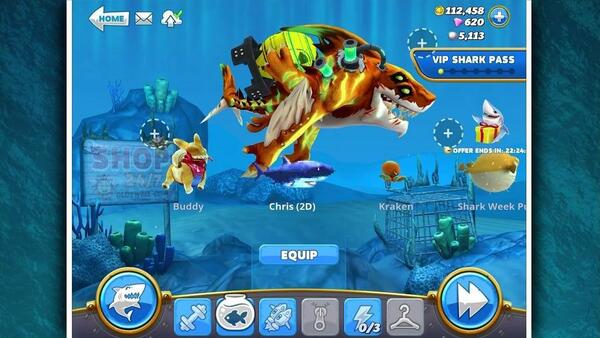 If you quickly satisfy your hunger, then you can activate the gold rush mode, after which your shark regains health and acceleration, and predators don’t hurt you. After repeated use of fever, the mega mode will open up for you, due to which your hero becomes very powerful, sweeping and eating away everything in his path. In addition, you may come across letters on the map from which you can make the word HUNGRY. When you collect the whole word, your shark will grow to enormous size and begin to destroy everything it sees. During this time, you can completely kill all living things on the map.

Hungry Shark World is a very high quality game from Ubisoft. It is very similar to Hungry Dragon, only here the action takes place not in the air, but in the water. If you want a fun arcade game with cool graphics, upgrading system and a large selection of heroes, then you have found what you were looking for.

Don’t forget to delete the original version of Hungry Shark World before installing our modified version to prevent errors during installation process.