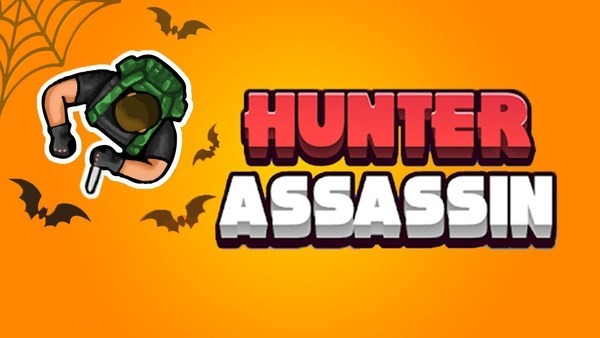 Hunter Assassin is a mobile isometric action game with an emphasis on stealth mechanics presented by Ruby Game Studio. In this game, the user plays as a professional killer, who must kill several mercenaries patrolling the area. Your main task is to kill all enemies in the location before they notice and shoot you. Enemies walk with flashlights and has small guns, but you have only a knife in your hands. Thus, you must sneak behind the enemy’s back and stab him from behind.

Stealthily move from one cover to the next, take advantage of the surroundings and terrain, hide and quietly destroy every oncoming shooter, trying not to raise the alarm. Despite the simple visualization style, the game is very exciting and dynamic. Thanks to the simple gameplay control mechanism, it will be perfect even for a beginner.

Hunter Assassin has long been a classic in the android games industry. Find out the main features of the project in our resume

There is training in Hunter Assassin, but it’s a pure formality. In fact, anyone can learn how to play in a few seconds. After all, the concept proposed by the developers is both very interesting and simple. According to it, the player-controlled character must destroy opponents roaming the map at each level. This is the game essence. You find yourself on the map, which consists of many passages and partitions. In the resulting labyrinth, enemies roam, illuminating the path in front of them with lanterns. With a help of top view camera the user can plan his actions, trying to move the character between opponents, avoiding light rays. 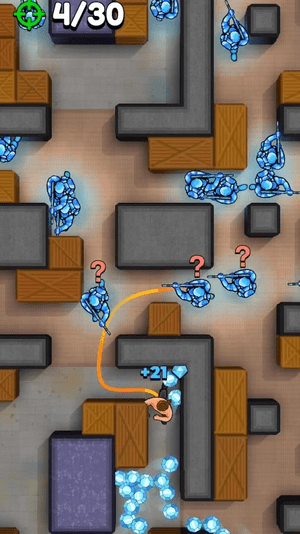 By the way, if you are a fan of games with simple gameplay, then check out fun arcade Talking Tom Fly Run: New Fun Running Game and Scribble Rider.

During the game, you need to collect keys. After collecting three keys, the player gets the opportunity to open three chests out of nine, resulting in crystals or a new skin for hero. Appearance isn’t the main factor of the skin. In addition, the character receives additional bonuses – for example, additional health points or increased movement speed. You can also simply accumulate the required amount of crystals. This gives you a random skin. You can also get crystals in bonus levels, where each enemy gives you an increased number of currency and does not attack.

Explore a variety of locations where the difficulty is constantly increasing

Hunter Assassin offers you over a hundred interesting levels, where there are ambushes, puzzles that require the player to maximize concentration and concentration. Only by making the right decision, you can move to the next level. Plan ahead your actions and take into account all the opponents within sight to achieve victory. Start with easy locations with only one enemy and work your way up to twisting and multi-stage levels with dozens of enemies.

Play with or without internet

An important fact – you don’t need a mandatory Internet connection to enjoy the gameplay in Hunter Assassin. Thus, the game is completely autonomous. You can run it anywhere you like, even without access to Wi Fi or mobile Internet.

Hunter Assassin along with simple gameplay also has nice graphics. At the same time, the game is undemanding to Android devices, so almost all device owners can play it. Along with good graphics, it also offers pleasant soundtracks and other sound effects. Shots of enemies, shouts of opponents, even steps of your hero – you can hear all this during the gameplay.

Hunter Assassin is a free-to-play game that you can download from Google Play but it comes with a number of in-app purchases. By downloading the modified version of the game, you get access to unlimited number of crystals. In addition, you unlock all characters and skins. You can immediately select the desired hero with a bonus to speed, health or other benefits. Moreover, there are no ads in our mod. Play with pleasure, and let nothing distract you from the process.

Our team has played Hunter Assassin on Android gadgets. We can assure you of correct and safe mod operation. All declared advantages and bonuses implemented in this version work great. To get all the benefits, just install the game on your device. Apart from this, nothing is required of you.

The controls in the game are extremely simple. It is enough just to click on the desired place on the map for the agent to immediately go there along the shortest path. Well, you have to click on enemy to destroy him. At the same time, it is better to attack from behind – so that the opponent does not even have time to notice the attacker. Otherwise, you can lose health points. If you destroy an enemy near his ally, he may hear noise. In this case, he will start looking for attacker, increasing his movement speed. You should hide from the alarmed bandit as quickly as possible, in order to attack then unnoticed and quietly. 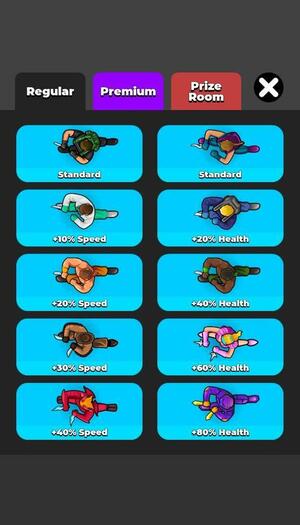 Locations are mazes of objects characteristic to specific area. Start your professional career from a mysterious warehouse filled with boxes, barrels and huge containers. Next, you may encounter a yacht, forest and other locations, the variety of which grows with each update.

In between direct operations in Hunter Assassin, you can complete mini-tasks that complement the gameplay with interesting challenges. Do not be alarmed, these tasks are not as hardcore as you might think from its description. Here you may be required not to take unnecessary damage from enemies, kill extremely stealthily and not to fall under the light of lanterns. For completing tasks, you are entitled to an impressive reward in the form of crystals.

Hunter Assassin appeals to absolutely all fans of stealth action and silent assassinations. If you are ready to challenge terrorists, then feel free to install the modified version and enjoy all the functionality of this great game.

How to install Hunter Assassin Mod?

Don’t forget to delete the original version of Hunter Assassin before installing our modified version to prevent errors during installation process.