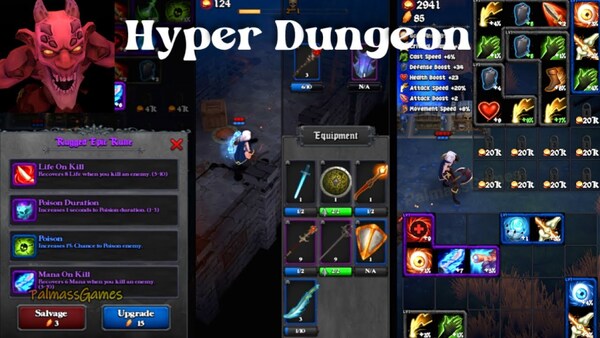 Hyper Dungeon is an exciting role-playing game from the Minidragon studio. Thanks to the unique Tetris-Rune technology, you can create a truly unique character. As a result, you have at your disposal a hero endowed with unique skills. Use them to defeat ordinary opponents, terrifying bosses, as well as other characters. You play the role of a lonely hero who has access to secret knowledge, as well as magic. Use all your skills to bring back peace and defeat evil. Pick up the best equipment and then go on an endless journey through procedurally generated dungeons in search of treasures, new ammunition and artifacts. If you like role-playing projects, then also download Project Clean Earth and The Legend of Neverland.

Hyper Dungeon only recently appeared in the app store, but almost immediately gained more than one hundred thousand downloads, which indicates a great interest in the application from users. 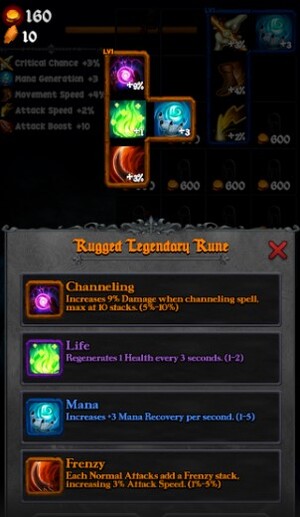 The essence of the gameplay within the framework of the project is to improve the level of your character. Upgrade his equipment, “pump” combat skills, and have fun. The application offers you the opportunity to constantly clear endless dungeons from various monsters, raid bosses and discover new locations. In general, the entire gameplay focuses on the destruction of monsters. Here is a dynamic gameplay with a simple but addictive combat system. Each trip to the dungeon will be a real test for your character. You have to apply all your skills, as well as unleash the potential of the chosen specialization.

The gameplay revolves around the idea of ​​players versus mobs. In fact, most of your time in the game will come down to PvE mode. The more monsters you manage to kill, the higher your level will be, as well as the quality of the equipment. Later, after a certain time has passed, the player will have access to campaigns against bosses. These especially strong monsters require maximum attention to them. However, the production from such a mob will be much more worthwhile.

As already mentioned, create initially a hero in Hyper Dungeon using the exciting mechanics of Tetris-Rune. In the future, the character needs constant pumping with new skills that can determine a specialization for him. It can be a magician or a melee fighter, in total there are several quite standard classes. In addition, you can pick up an assistant, a certain skill-improving equipment. Gather a group to increase the efficiency and speed of killing monsters.

Download Hyper Dungeon mod APK, where a special menu will be available. There you can activate an unlimited amount of mana, enable the one-hit kill function, as well as an infinite amount of life energy. Disable cheats at any time, after which you will continue to play the original version of the application.

Immerse yourself in a world where darkness began to envelop everything in the area, and an army of demons is already on the threshold of your home. Embark on a long journey where ferocious creatures, deadly traps and ancient relics will be waiting for you. The gameplay of Hyper Dungeon itself has a slasher format, where you control all the actions of the character, help him move, strike, dodge enemy attacks and use superpowers. Tasks in most cases come down to one thing: overcome the specified distance, destroy all the monsters and, possibly, free one or another character.

Various undead will confront you. At the time of the battle, you need to attack the most dangerous enemy, quickly switching between targets and only then move on to secondary targets. Sometimes you will also face battles with bosses that are several times larger than the protagonist is and have colossal strength and armor. Find an approach to each enemy, destroy them and earn coins necessary for pumping the skills and abilities of your character.

Hyper Dungeon is a classic role-playing game for android. It has all the necessary attributes: a lot of enemies, pumping, exciting tasks and a flexible pumping system.