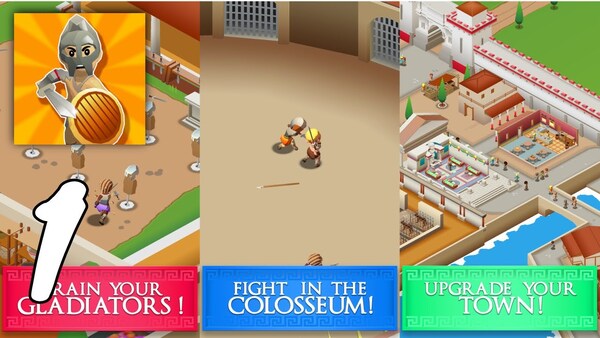 Idle Gladiator Empire Tycoon is an entertaining game from the Neon Play studio where you have to train a fighter and then send him to a gladiator fight. Play as a gladiator of the Roman Empire, who managed to escape from slavery. You have to help him build a new life, teach him the necessary skills, and then fight for his freedom. City building is also quite an important part of the game, and you can build a wide variety of buildings, and greatly improve the infrastructure. Globally speaking, you have to manage a part of the Roman Empire and lead it to prosperity, but the main thing in the application is the training of gladiators. We also advise you to pay your attention to Rail Lands and Gun Simulator: gun builder 3D.

Games about gladiators are traditionally popular with users, but you definitely have not seen such applications before. If you are interested, check out our review.

Train and equip your fighter

Your main goal is to collect unique and impenetrable armor that will provide you with effective protection. Also, do not miss the opportunity to get yourself a unique sword or some other melee weapon. After each battle, players will be able to choose their new equipment. Try to create a unique costume that you can create from a common color.

There are also skills that need to be constantly developed. Do it by clicking on certain parameters. For example, you need to learn how to use a spear and a sword. Do not forget to arm yourself with a shield, because you need to defend yourself, and not just attack.

Idle Gladiator Empire Tycoon offers a huge variety of tasks and auxiliary missions, spacious locations and fantastic creatures. It is necessary to liberate the tribal, explore the barbarian lands and help in the restoration of the destroyed cities. Collect resources and create weapons, armor and useful items that will help you destroy one enemy after another. The main thing is to click as much as possible, and then success will not keep you waiting.

Fight in the Colosseum!

All characters have a number of abilities and distinctive skills that improve depending on the current level of the unit. The battles in the game are epic. Player independently controls the main character, although in general he practically does not control him, but only selects special skills.

Think over tactics for each duel, adapt to your opponent, block his attacks, counterattack and use all your abilities to finish off the enemy. Victories bring gold and crystals, and you need to spend them on unlocking new characters and leveling them up.

The graphic component in Idle Gladiator Empire Tycoon is of high quality. Everything has HD quality, as well as 2D, but with 3D elements, which adds to the uniqueness.

We suggest you download the mod Idle Gladiator Empire Tycoon Get rewarded for not watching ads, the more you spend, the more money you spend.

Idle Gladiator Empire Tycoon offers you to curry favor with the emperor and recreate the Roman Empire. Train gladiators, who will then fight in the very heart of the empire – the Colosseum. To get started, build training bases in the city itself so that your fighters can prepare for battle. Then provide them with other useful infrastructure, such as a canteen, tavern, food stall, or bathhouse. At first glance, these buildings may seem insignificant, but they are also extremely important. 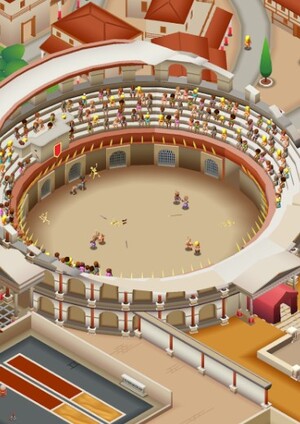 Next, delve into the process of training gladiators. Practice various tricks, and for this, click on the screen, improve performance and develop fighters. Learn the art of using a shield and a sword. Well, when everything is ready – go to battle. It is important to win, because this way you can earn money for new improvements.

Idle Gladiator Empire Tycoon is a high-quality clicker simulation that tells about the life of great warriors. You have to develop the territory adjacent to the Colosseum in order to provide the gladiators with everything they need.