Idle Grindia: Dungeon Quest is a pixel art RPG from the developers of Iron Horse Games LLC. Your main task in this game is to kill numerous units with the help of a lonely hero. The gameplay in this project is extremely simple. Battles take place in auto battle mode, your character and the enemy alternately attack each other, taking a certain number of lives. You need to pump the hero, buy clothes for him, improve equipment and weapons, arm himself with active and passive skills and have a pet. Do not forget about epic boss battles. Get to them through several normal levels, where a wide variety of opponents awaits you. Among other role-playing projects, we can recommend Final Fantasy V and Blue Archive.

Idle Grindia is in Early Access, but everyone can check out this distinctive game.

Main goal of Idle Grindia is to destroy your enemies. Opponents may look completely different in appearance, but they are all have same combat mechanics. You attack each other in turn. At the same time, you have a certain amount of vital energy like your enemy. It is impossible to influence the gameplay, so you just have to watch the battles. If you initially fight wolves, goblins and bees, then later dangerous bosses will challenge you. They are extremely difficult to defeat without the appropriate uniforms and skills. However, more on this in the next part of the article.

To make the character of Idle Grindia stronger, you must equip him with weapons and armor. In general, initially the hero already has standard armor. This is a sword, bib, hat and necklace. Each of these elements is available for improvement, but you need in-game currency for this. Naturally, the higher the level of clothing or weapons, the better they are. It will be difficult to pump it too much, because it will take a lot of money.

Another important aspect of Idle Grindia is skills classified as active and passive. Passive ones permanently add a certain bonus to your hero’s performance, while active ones allow you to inflict additional damage on the enemy or to strengthen your character. Special skills will be unlocked as you progress. There are several dozen of them in the project. 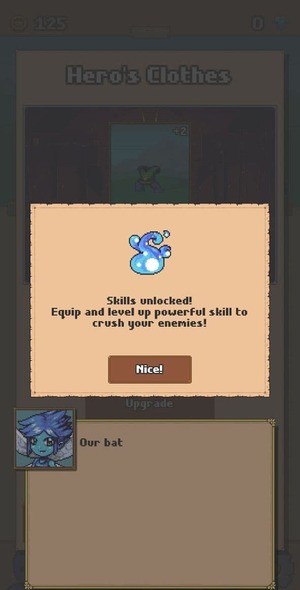 If you are having difficulties in completing this project, then you can always try to tame your pet to become even stronger. Each animal gives you a certain bonus, but the animal itself will fight faithfully next to you. To tame a pet, you must first catch it and then train it. The pets here represent a form of some mythical animals, somewhat similar to Pokemon. A cactus, a unicorn with wings, a tortoise with a sharp shell, a cheerful light, a turquoise cat, a newt, a rat with a penknife and many others are waiting for you.

Idle Grindia application features pixel graphics made in vertical mode. The game has practically no age restrictions, so allows anyone can play it.

The project has an extensive store where you can buy in-game currency. Do it for real money, but if this option does not suit you, then you can download the mod for free shopping. Use it to make purchases free. Just complete the transaction and wait a few seconds to receive the purchased item into your inventory or to your in-game account. 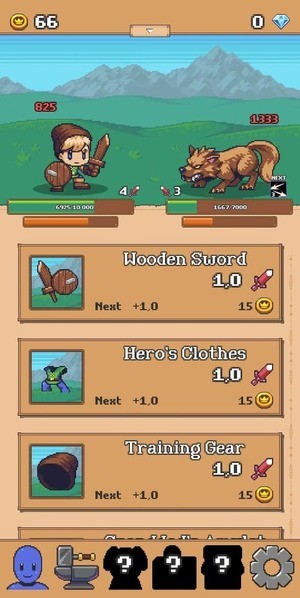 Projects with Idle in the title have taken over Play Market to the delight of millions of users. The fact is that numerous developers over the years of development of this subgenre have touched on such a number of topics and concepts that absolutely any user will find something to their liking among idle projects. The most popular are economic simulators in which you need to run a business, but there are many other popular varieties of passive gameplay. For example, many studios dive into the creation of combat role-playing projects.

As for Idle Grindia itself, it does not require a lot of effort from the user. This kind of gameplay will surely appeal to those people who do not like to delve too deeply into games. Nevertheless, some actions also depend on you: pumping weapons and armor of the hero, learning new skills and hiring pets. Complete all levels from start to finish, fight dangerous bosses and save the world from evil.

Idle Grindia is quite an addicting auto battler that offers the user extensive options. You can also download the game with a mod for free shopping to facilitate the walkthrough.