Idle Military SCH Tycoon Games is a nicely executed and well designed “tap simulator” in which gamers will lead a military training center. Implement all processes of preparing recruits for chosen specialty and status. Players will accept volunteers, distribute them by class and identify talented commanders. Receive excellent specialists in a particular field, form perfectly coordinated groups from this mass and then send them to carry out missions set by the command. This is not all that awaits the participants in this entertainment. If you are into simulation games, then download Idle Burger Empire Tycoon and Wool Inc: Idle Factory Tycoon. 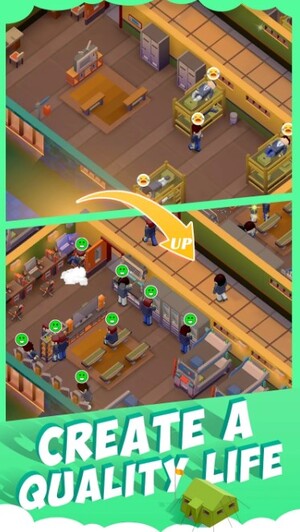 The game is as a manager simulator, as there is no definite end to the gameplay. You can develop your base for as long as you like, only the amount of income and expenses will change.

Develop your military base

Idle Military SCH Tycoon Games offers you to click on a particular training ground to speed up the training of fighters. You tap the screen and the soldiers accelerate. At the same time, the development of the military base proceeds without the participation of the user. You only need to control the process.

In the first couple, you have to rely on a small starting capital, so you press the display a lot. The essence of the game is to create a full-fledged and modern military base in which you can train as many soldiers as possible.

Depending on what exactly a fighter does, the amount of money that he brings into your budget also varies. More difficult and professional trainings are paid higher than ordinary physical training. In addition to “buying” recruits, you can also improve the infrastructure of the base itself by acquiring additional plots. Over time, you will have a shooting range, a tank range, an obstacle course and much more in Idle Military SCH Tycoon Games.

Do not forget that you also need to overcome all the difficulties that have arisen on your way. Reach the pinnacle of your military career and ensure the stability of your territory. Control the physical and mental side of the soldiers. Be prepared that your actions will not be limited to this. In the end, you need to prove your high status by participating in the most difficult military operations around the world. You can visually review every decision made in Idle Military SCH Tycoon Games. 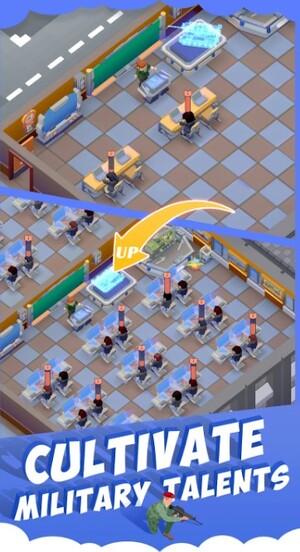 Three-dimensional graphics, but in a simplified form, are presented in the game. All models are as simple as possible, as the environment does not have a high degree of detail. This visualization style has a positive effect on performance.

Use enough money to spend more and get rewarded without watching ads.

Create your own military base, becoming a general and chief on it. Your base will be small, but as you earn money, you can expand it and do much more. Train soldiers In order to make a profit. This is not an easy task, because each site costs a certain amount of money.

On the sites, you can also increase the number of people, which will bring even more profit. Your soldiers train day and night and when they finally become strong and skillful enough, you can send them on missions. Fight on a variety of plots of land and in a variety of conditions. 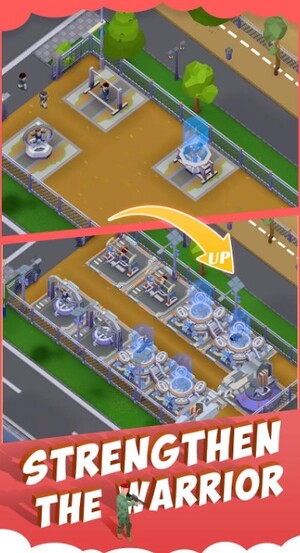 You can send your soldiers on various missions to gain more prestige and recruit new soldiers. In general, this is quite an ordinary time killer that tells you about the army.

Idle Military SCH Tycoon Games is a game about developing a military base. In general, this is a typical clicker, but with some features.