Idle Monster GO! is a game in which you have to take control of strong Pokemon, train them and fight. Here you will take on the role of one of the many trainers and set off to explore the vast open world, catching rare Pokemon there to make them part of your team. Train your monsters to achieve evolution by fighting in battles against other trainers or against wild Pokémon. In addition to standard activities, such as fighting wild Pokemon, you will meet a variety of playable characters that can give you an interesting game quest. Participate in many local and global competitions, where the best coaches in the world fight. If you like role-playing games, then also download Mighty Party: Magic Arena and Demon Hunter: Shadow World.

It is hard to imagine such a famous universe that could compete with Pokemon in terms of popularity. Idle Monster GO! continues the history of the glorious series. 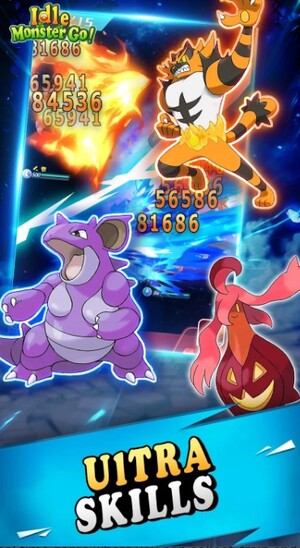 Your squad includes three Pokemon Masters, each of whom places a certain “pet” on the battlefield. You can participate in fights both online and offline. Expand your collection and be active in various events in order to get additional masters.

Collect different teams for each individual event, or make one ultimate hand. However, in order to win a major championship, you will first need to work hard and catch strong Pokemon in order to create a viable team that will be able to cope with any danger.

Story missions of Idle Monster GO! do not involve any movement, puzzle solving or anything else. Here you will constantly fight with a variety of opponents. You need to replay many levels more than a dozen times, trying to get the very thing or the ingredient needed to improve your party members.

The complexity of the fights grows quite quickly, so you need to develop various tactics from the very first battles, select the best combinations of party members, and so on. Keep in mind that each Pokemon belongs to some element. It is worth choosing a team in such a way to combine the abilities of its members and give additional effects during fights.

Join a guild and play with your friends

Idle Monster GO! offers a full-fledged story campaign and a lot of dialogues. You will be able to communicate with all the characters you meet as you explore the world. Many heroes will be skeptical of you. After a glorious battle, you will be able to make friends with them and walk the world hand in hand. Your main base will be the coaching center, where you can not only communicate with the characters, but also buy various useful items. 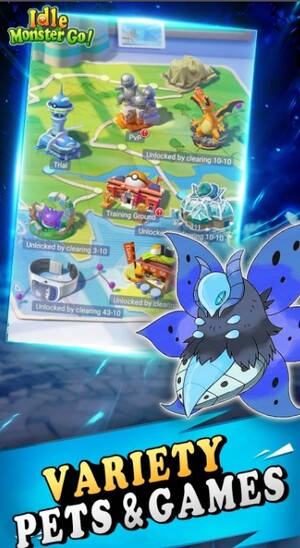 Each kiosk or individual hero plays the role of a menu item here. From one vendor you can call on new trainers, from another you can buy various consumables to gain an advantage in battles, and you can upgrade and heal wounds from your Pokemon from a third. Since the game is online, you can also compete with your friends.

Download mod Idle Monster GO! for an unlimited amount of money to get as many advantages as possible in battles.

The gameplay of Idle Monster GO!, as in most role-playing projects, begins with the choice of a hero and his customization. After that, you get into the thick of the storyline where you will only perform these tasks. In this way, you can get an initial team of trainers and their creatures, as well as learn the basics of gameplay. The main point of the game is to defeat real opponents or bots, get experience points that are necessary for pumping trainers, as well as additional money and skills to improve Pokemon. 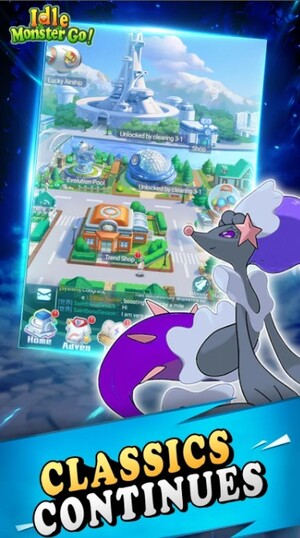 Here you will find only devoted fans of the cartoon and lovers of furious battles. Show how much you know the Pokemon universe, because in order to win you will have to combine a variety of summoners and their creatures. Also, do not forget that one master can only own a single Pokeball, so spend your resources wisely and do not waste points and experience on creatures you do not need. Come up with unique strategies with which you can maximize the strengths of each monster.