Idle Siege: War simulator game is an exciting strategy from the famous Gameloft studio. Create the most powerful army by demonstrating your skills as a great commander. Enlist the help of swordsmen, archers and special fighters to crush enemy redoubts and capture enemy castles. Place a catapult under the walls of the castle and destroy it. Upgrade units, making them stronger and faster. Show your extraordinary talent as a commander in this wonderful game. You are waiting for a lot of dangerous missions and a very exciting storyline. If you like simulators, then also download Luna Ravel – Visual Novel and PC Creator 2.

Idle Siege: War simulator game is a game from the popular studio Gameloft SE. What did the authors bring to their new project? Find out right now.

The main purpose is to attack enemy redoubts. You have to capture many castles in order to rise to power throughout the continent. At the very beginning, you need to build a special camp to create soldiers. Only ordinary swordsmen are available at the very beginning. Put them in the line of attack and send them into battle. Swordsmen can go to attack enemies when there are enough of them.

Over time, Idle Siege: War simulator game will let you to use other units. However, for some reason, they do not attack from afar and go almost to a frontal attack on enemies, which has a bad effect on their survivability. When you pump a little, you can create super fighters. This is one huge unit with a lot of attack and vitality. It will take a long time to create it, but it is also very difficult to kill one.

Upgrade your fighters and base

In addition to the accompanying buildings, the main character has a main huge base. There you can give orders for the offensive and coordinate all processes. This base needs to be improved. As a rule, there are three levels of improvement. With each stage, you open an additional type of troops, as well as slots on the battlefield. To do this, you need gold coins to obtain during successful attacks.

Do not forget about pumping the units themselves. Fighters will become stronger, faster and more tenacious with each level. All this also requires money, but the result will please you. We recommend paying special attention to powerful single fighters, because they are able to destroy entire enemy fortifications.

Capture bases and turn them into ruins

The entire gameplay of Idle Siege: War simulator game consists of into missions. Complete certain tasks, but the global goal is the same – to destroy all enemy fortifications. Usually fortified bases will confront you. First, you need to destroy the gate, then invade the courtyard and destroy the enemy’s support towers. At the end, attack the opponent’s base, destroying the citadel. You do not need to manage the fighters, they will do everything themselves. The only thing that is required from the user is to tap on the already destroyed sections of the enemy base so that they crumble, and you can go further.

The graphics in Idle Siege: War simulator game are the most ordinary and unremarkable. The game features top view in vertical mode, so it will be comfortable playing anywhere.

The fights in Idle Siege: War simulator game are quite slow, which can bore many users. To make the game more dynamic, we suggest you download a mod that allows you to multiply the gameplay speed.

It is also worth noting the high cost of improvements, especially the main base. Often you have to pay a thousand coins, which is a lot. If you want to develop faster, then in this mod you can activate a special feature in which all buildings will be free for you. To use the cheat, you need to open a special mod menu in the upper left corner of the screen. 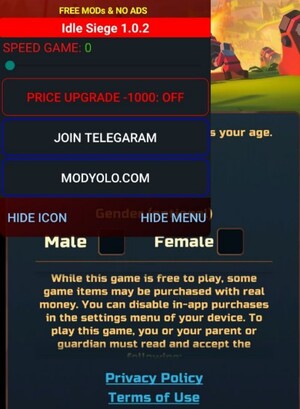 As you progress through Idle Siege: War simulator game, your troops become stronger. There will be more and more opportunities to attack. For example, you can call on siege weapons to help and beat the enemy’s castle without even going inside. You can also sometimes request air support. The first time it is free and then you have to watch ads.

As for units, initially only one squad is available for you. Subsequently, you can unlock new slots to make the army even more powerful. The game also has a huge number of tasks for which you will receive gold coins. For example, upgrade the base to a certain level or kill several enemy archers.

Idle Siege: War simulator game is an interesting strategy in you must think over tactics for battle, improve units in time and upgrade the base. We recommend a fun pastime to every user.