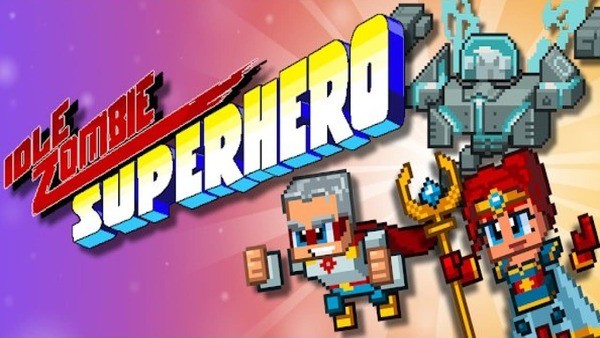 Idle Zombie Superhero is a pixel game where players have to save the world from a crowd of the dead. Supervillains decided to take over the world, so they invented a virus that turns humans into zombies and then set crowds of the living dead on the city. They forced them to walk the streets and infect people, but heroes with superpowers stood up to protect them, ready to sacrifice their lives to save civilians. Fight various heroes, study their superpowers, destroy dozens of zombies with one hit and start clearing the streets from undead and super villains. Fly from one area of ​​the city to another and everywhere leave behind mountains of corpses from the dead and small destruction. We also recommend downloading Metal Soldiers 3, as well as Mine Survival.

The game is in early access, but tens of thousands of players have already downloaded this project. Do it yourself.

Idle Zombie Superhero has a very low entry threshold, because everyone can play it. You will not have difficulties with the gameplay. Your hero finds himself in a dilapidated city, where zombies have ruled everything for a long time. The task of the character is to clear the streets and to get rid of mutants. To do this, simply tap on the screen, shooting at enemies and destroying them in close combat. In addition, the character has single and double bombs in stock, which inflict huge damage.

The whole project is divided into levels. When you pass enough on one location, it ends, and you get the opportunity to improve your hero. More on this in the next section. By the way, there are four global locations in total in the game, where all the actions take place: metropolis, Moon Dome 6, Noir City and ancient civilization where dinosaurs live. To gain access to the next worlds, you must complete all missions in the previous ones.

Gather a team of heroes and pump them

Train fighters and recruit new ones to fight more successfully, as well as learn special combinations and attacks, throwing enemies and trampling into the dust. Shattered asphalt, frozen bridge – apply these and dozens of other skills in Idle Zombie Superhero without leaving more than one villain alive. There are eight heroes in the application, and each of them has its own characteristics and weapons. Someone walks with two pistols, and someone prefers melee weapons. You can even summon a robot to your side to do all the work.

By the way, there are many other improvements to use in Idle Zombie Superhero. In particular, you can upgrade your weapon or completely change it. All improvements cost several types of in-game currency, which you can obtain during battles.

Another feature is combined skills. They allow characters to do much more damage per unit of time. However, such skills are not available all the time, so try to use them wisely. All heroes also need upgrades. For example, by increasing the amount of their vital energy. In addition, it is possible to enhance the explosive power of the bombs. Improvements become available as the character levels up. Do each upgrade up to twenty times.

Idle Zombie Superhero is a pixel project, so you don’t have to expect realistic graphics from it. The game is made from a top-down view, so you can easily control everything that happens on the screen. It should be noted the warlike music, as well as many effects during the battles only add atmosphere to the gameplay process.

All improvements in Idle Zombie Superhero require different in-game currency. Having it all in stock is quite problematic. To make it easier for you, we suggest downloading free shopping mod. Now you can make improvements and purchases even if you do not have enough resources.

The Idle genre is a very flexible and malleable game direction, so developers have the opportunity to come up with the most unexpected and interesting themes. It is worth noting that although the subgenre in question is a long liver, its popularity is growing in the realities of modern trends in the mobile application market. There are still players who like to watch various processes, earn virtual money and carry out all sorts of improvements. The reviewed product offers gamers exactly the kind of gameplay for which the community fell in love with idle projects.

Idle Zombie Superhero require from players only to shoot at enemies and not forget about timely improvements, which are extremely important to achieve the result. The controls in the game are extremely simple and carried out with only one finger. You need to tap on enemies, sometimes throw bombs and use super skills. Note that the game has an age limit of 7+ as there is moderate violence here. Fight for the right to survive by destroying hordes of zombies and saving the world from the apocalypse.

Idle Zombie Superhero is a pixel project that combines elements of arcade, shooter and simulator in zombie apocalypse setting. This game can have different assessments, but to understand this, everyone needs to download and try it out.