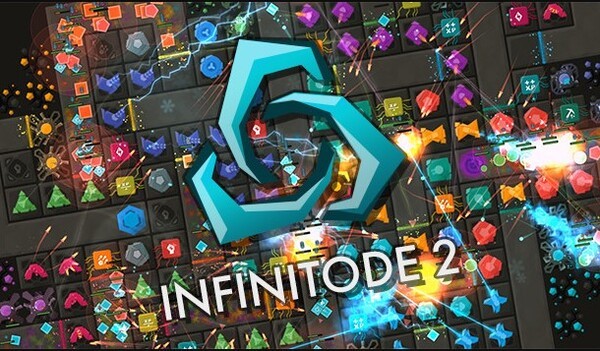 Infinitode 2 is an endless tower defense strategy for android devices for one user from the of Prineside studio. If in other games from the same category you are required to hold out a certain number of waves, here you can build towers as long as you like. Enjoy detailed map editor and colossal improvement tree. The project is a remake of the first part, enriched with new mechanics. Authorship belongs to indie developer therainycat. There is interesting opportunity to create unique maps and exchange them between players. It is especially valuable that a gamer can insert his music into any map. If you prefer strategies of such type, then we can also recommend you Crazy Dino Park and MultiCraft.

Prineside Company, which released Infinitode 2, did not come up with something incredible. The main goal of the player is to destroy opponents who are advancing in waves on your domain.

The creators took Tower Defense concept as a basis and then began to conduct experiments. They wanted incredible solutions, trying to relieve future players from boredom while exploring the storyline. For this reason, we tried not to use previously executed templates, providing more scope for imagination. After much suffering, it turned out to create this masterpiece, which is conducive to pumping tactical thinking of the players. Destroy the advancing opponents in waves, trying to come up with new tactics for victory every time. 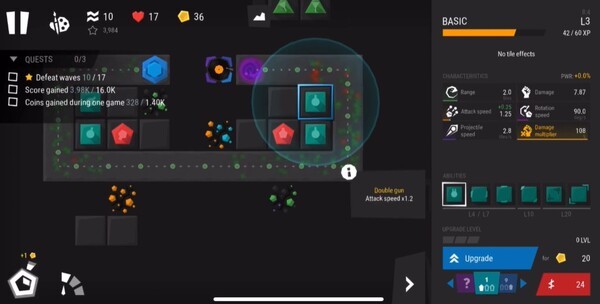 Each tower in Infinitode 2 also represents an individual soldier with different characteristics. You need to go through many enemies, advancing waves. Do not forget to raise not only your level, but also the level of the wards. The more you upgrade everything, the more powerful you will inflict damage. Soon, learn how to generate new types of cards independently that suit your requirements. The more levels you complete, the more resources you accumulate. Use them to create and upgrade cards and towers.

The higher the level, the higher its difficulty. Try to approach the formation of tactics carefully, trying to predict the actions of your opponent. Enemies never end, so the level will end when you lose all health. Set records and destroy everyone in your path, striving to rise in the rating. The developers paid enough attention to the social aspect, so you will not get bored.

Defend the fortress at all costs

Use towers of fourteen types with damage of a certain type for protection. Each building in Infinitode 2 has certain characteristics common to all (such as radius, damage, attack speed), unique. Up to the tenth level, defenses are available for coins. At one location, you can build more than five hundred towers, miners, miners and modifiers. Go through several training levels, after which the Base Tower and the Sniper become available. Other buildings open when passing levels. The maximum level is twentieth.

If you want to interact more with other players, just exchange contacts with them. Thanks to this, it will be possible to arrange an epic confrontation with a huge number of towers. Do you want to recruit more than 500 members? Join other users. Thanks to this, it will be possible to have fun at any time, which gives many positive emotions. The levels last endlessly, and you just have to fight and have fun. Do not forget to pump the characteristics of the towers in order to provide decent resistance to other participants in the gameplay. 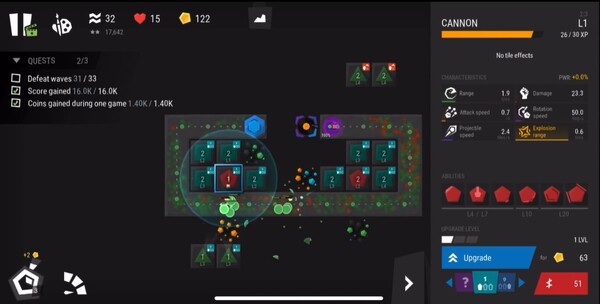 The graphics in Infinitode 2 are very simple and uncommon. All objects have the form of regular geometric figures. This helps to immerse the level textures faster. The developers provide you with the ability to customize the appearance of objects independently. The project is perfectly optimized and stable, so it will work great everywhere. The sound component of the project is minimized, but at the same time, it allows you to immerse yourself in the gameplay to the maximum.

With dozens of different ways to upgrade your towers, it can take a long time for you to start defending yourself with dignity. That is why we suggest you download Infinitode 2 mod for unlimited money, with which you can upgrade your fortifications from the very first stages.

Get access to an endless storyline where everyone chooses own direction of development. You have to come up constantly with new strategies to diversify the gameplay. Thanks to the map editor in Infinitode 2, each player independently adjusts the stage difficulty. Large-scale battles await you, where you need to be attentive and concentrated. If you want to win in every fight, we recommend you to form your own strategy with paying a lot of attention to attacking opponents. Do not forget that you have to not only confront other players, but also get useful materials.

You have to deal with the protection of your own settlement, trying to destroy everyone who stands in its way. Eliminate the entire army of your opponent so that the settlement behind your back does not suffer. You have to try hard, because the enemies are attacking from all sides. Missions in Infinitode 2 take place in an endless mode, which makes playing only more interesting. After reaching the designated number of waves, you receive additional experience, currency and other useful materials in the game.

All the currency you collect during the game goes to the necessary things. Use it to upgrade your towers Do it regularly in order to eliminate enemies with one shot. The stronger the weapon, the greater the chance that you will make it to extra time. If you manage to maximize the level of the main weapon, you will unlock new types of tasks. Soon, interesting defenses for the settlement, shells and much more become available and may come in handy in the confrontation.

Infinitode 2 is an unusual strategy format where you need to control towers to repel enemies. Your main task is to survive for a long time. Remember that after the indicated number of waves, opponents do not end, which brings you extra money. Get tons of incredible emotions by completing various achievements, as well as getting a good reward for them.

How to Install Infinitode 2 Mod APK?