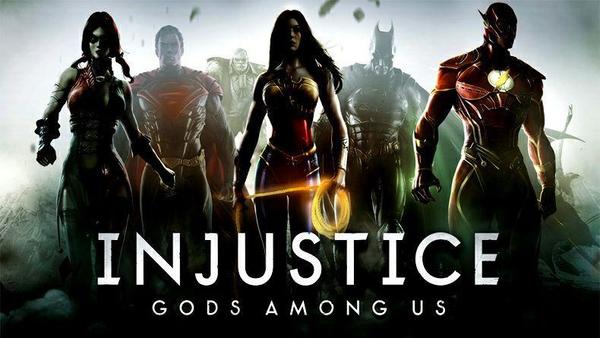 Injustice: Gods Among Us is a fun fighting game with elements of a collectible card game from the developers of Warner Bros. International Enterprises. Choose from your favorite DC superheroes and take part in epic battles, performing various spectacular combinations and using a variety of skills. Your main task is to defeat all enemies on your path, while completing interesting levels in various locations. Choose your heroes, level them up, take them through many difficulties and achieve success by defeating evil enemies. Alternatively, try playing online against real live gamers in exciting 3v3 battles.

Injustice: Gods Among Us is a time-tested quality game. If you still have doubts, we are going to prove its value to you.

Injustice: Gods Among Us boasts a huge number of its DC characters, which include such popular ones as Batman, Superman, Catwoman, Flash, Joker, Bane and others. These guys are famous all over the world from comics, films and cartoons. All heroes in the game have cool animation and detailing. Another feature of the game is that there is no good or evil. Choose superheroes or supervillains to your team and erase the line between good and evil. 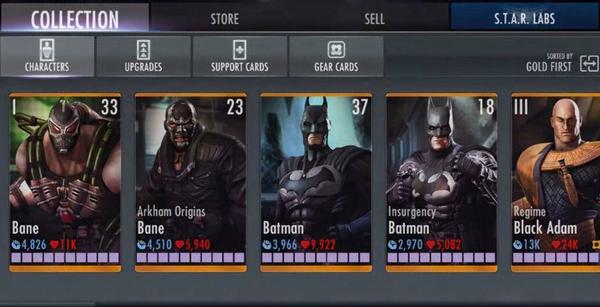 Collect cards to get new heroes. A card is a character who has a level, skills and upgrades. If initially one skill is available to the character, then several more ones will open upon reaching the level. Heroes improve their damage and increase the number of hit points with each level. As the game progresses, you can buy additional cards that expand the range of characters’ skills. For example, increase bleeding or poisoning. Grow your collection of cards and try different heroes in battle to create your ideal team of three fighters.

Participate in three-on-three duels to make Injustice: Gods Among Us even more interesting. You can always change the set of your fighters using the available characters before the battle. In this case, only one hero can be active, while the other two will wait for their turn. If you see that your character may die soon, change it to another one and continue the epic battle. Your crippled hero will get a respite and may recover a little. Based on skills of your fighters, you can plan how to oppose opponent’s team. If the enemy has a lot of attack, and you have little health, then it is wiser to choose a character with a large amount of HP to survive enemy’s attack.

As the battle progresses, the scale of special moves fills up, which, when filled, allows you to perform one of your super attacks.

If you are tired of going through the single player campaign and fighting against the AI, you can always go online and challenge gamers from all over the world or call your friends and see who the best fighter is. Don’t forget to check the leaderboards, because one day you may be there too. 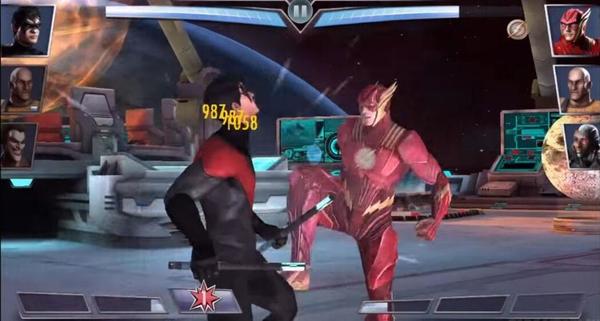 The game looks very nice, both graphical and sound components have the highest level of development. Each character is like stepping off the pages of comics. Special moves in slow motion and have very cool special effects. Therefore, developers didn’t stint on the entertainment part of Injustice: Gods Among Us, as it’s one of the main game advantages that can certainly appeal to even the most demanding gamers.

This is free to play game with in-app purchases available. Reviews say you need to play for a long time to unlock all the epic characters from the comic book universe. However, you can download the modified version and get unlimited coins and credits, as well as immediately unlock all the characters and use them whenever you want. Mod also provides unlimited challenge boosters.

We tested Injustice: Gods Among Us for our users. Based on the results, we assure that mod works correctly. How to use it? You just need to install the game and run it.

We can introduce the game in several parts: buy or win new cards, improve these cards, participate in trials, win special characters and go through an exciting storyline where you have to meet different rivals in various locations. 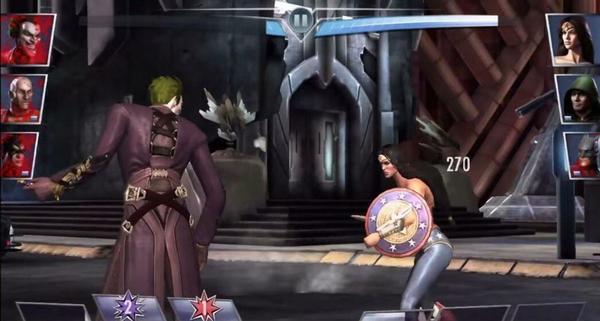 Moreover, each character has its own amount of energy, so you cannot fight for several hours with the same hero, since he needs rest. In general, one battle consumes one energy bar.

We were also pleased with the game physics. In most fighting games, the winner is the one who can corner the opponent and deliver a series of punches without interruption. Here you can always block the enemy’s attack and answer him with your fists, or with special abilities.

Super attack combos look very realistic. You can send your opponent into the heavens with uppercut, send giant demons to incinerate the rival or make a run strike to lay him down. All this is impressive and amazing, as the developers didn’t skimp on spectacular special effects.

Injustice: Gods Among Us is one of the best fighting games for Android. This game will definitely brighten up your leisure time and give you more than one hour of pleasure. If you are an avid lover of game fights, if you are a fan of Mortal Kombat and DC universe, then you absolutely cannot pass by this entertaining game. Moreover, you can download continuation of DC franchise – Injustice 2 or choose more pleasant and calm gameplay in Magic Tiles 3.

How to install Injustice: Gods Among Us Mod?

Don’t forget to delete the original version of Injustice: Gods Among Us before installing our modified version to prevent errors during installation process.