Invasion Breaker: Idle defense is a strategy with clicker elements from the developers of Mamboo Games. Players have to attack enemy towers using ordinary soldiers, tanks, helicopters, laser weapons and much more. At each level, you have to destroy another tower, but it is extremely difficult to do this, because it has a large margin of safety and you have little strength at the first stage. To fix this, tap on the base, earn coins and spend them on various improvements. The enemy will fight back and send his troops to defend the base, but the right strategy will help you succeed. If you are interested in such projects, then also download Countryballs at War and Warcraft Arclight Rumble.

Invasion Breaker: Idle defense has over one million downloads with an average rating of 3.8. This is due to the abundance of advertising, which turns on every few minutes. 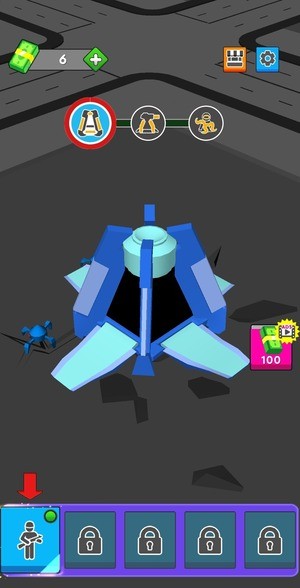 We all know many tower defense projects where you have to send troops and defend your base. Everything will be exactly the opposite in Invasion Breaker: Idle defense. Here the enemy holds the defense, and you have to attack. Players have to destroy the alien base in each of the levels. Periodically, enemy units will come out of it, so it is important to suppress this with your army. Destroy the enemy and stop the invasion while it is still possible. Otherwise, it might be too late!

In general, this game has pronounced clicker features. You need to tap the screen frequently to earn money. Do this several times and hire the first infantry soldier. It is rather useless and fires occasional machine gun bursts at the base, draining it of very little life energy. However, a large number of such soldiers will already give you enough advantage to win. Further, strengthen your army by buying tanks, helicopters and laser weapons. Surround the enemy from all sides and destroy him.

Not only your units differ in variety, the enemy also tries to adapt to your attacks and do everything to win. It happens that the enemy focuses on the infantry. In this case, you should think about heavier weapons to suppress his attempts to attack. If the enemy can attack through the air, then the player must saturate the army with tanks or laser weapons as much as possible. In any case, you must first properly study the weaknesses and strengths of the opponent, and only then proceed to the assault before the start of each level. 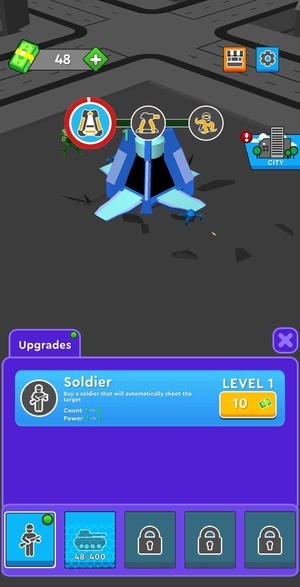 The application features a vertical style. In general, the graphics are two-dimensional and rather primitive. At the same time, the effects of explosions and attacks on the enemy boast of high quality and brightly.

In Invasion Breaker: Idle defense there are many types of purchases that you can make while leveling up your units. However, many of them will require real money. If you do not want to spend your savings, you can download a mod that allows you to make free purchases for real money.

Invasion Breaker: Idle defense is a clicker where the user has to fight against aliens, protecting humanity from bloodthirsty invaders. By playing the app, you will be able to develop a strategic skill, building a competent line of defense, and carry out offensives with advanced units of troops. Distribute resources in a practical way, pump equipment indicators and win. 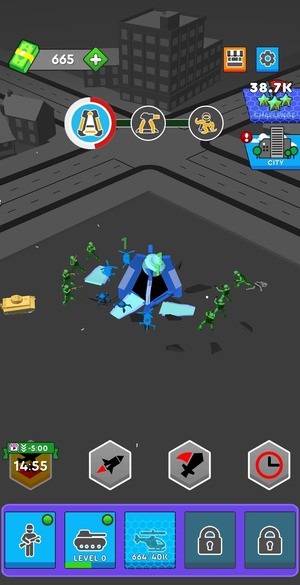 Have you watched The Avengers? Now you can feel like Captain America and unite the forces of humankind in the fight against aliens who arrive on planet Earth and do bad things. You will get a new enemy that you need to overcome at each new level.

The battles are automatic, you only need to properly distribute forces and constantly improve your technique, as each next round the enemy becomes stronger.

Invasion Breaker: Idle defense is an exciting clicker strategy where you have to attack enemy bases. Use the entire available arsenal of weapons and think over various tactics. In this case, you will succeed!