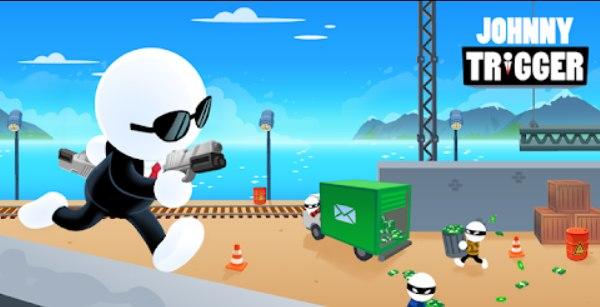 Johnny Trigger is a cool action game with elements of slow motion in which you have to challenge the gangs that invade the city. Use a huge arsenal of weapons and your ingenuity to destroy bosses and their minions with accurate headshots. Excellent three-dimensional graphics with stunning pictures and drawing of the most spectacular hits are waiting for you. If you prefer games with no plot like PK XD, then plunge into a real action. There will be no time to think too much, the main thing is to shoot, reload and shoot again.

Johnny Trigger has over 100 million downloads from Google Play, which means that the game can be considered a real hit. Let’s see why this game attracts users so much.

Johnny Trigger perfectly combines the mechanics of continuous running and shooting from different types of weapons. As mentioned earlier, here you go through the levels, represented by small sections of the route. Each track includes several skirmishes with bandits. You need to perform some trick or somersault and shoot the enemy at the right time. There is a semblance of a laser sight especially for this. Therefore, you can predict the moment when the special agent’s front sight will be in line with the enemy. 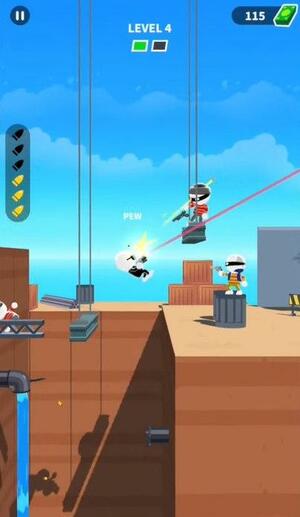 Just one chance to win

One miss during a shootout with opponents – and everything is lost. You have to start with a checkpoint, which are scattered around the level after each group of enemies. In total, you can meet two or three such groups at the level. The number of revivals is not limited. However, if you get tired of constantly losing at the same level, you can just watch the ad and skip the annoying stage.

Dozens of different types of weapons

Any shooter should offer the player a choice of weapons. Johnny Trigger provides you with special shops that randomly appear on the levels. The shop gives you a choice of three unique guns, which differ in terms of damage done. Typically, you can buy first two weapons for in-game currency and the third – for a certain number of ad views. You can change weapons at any time in the corresponding menu item. 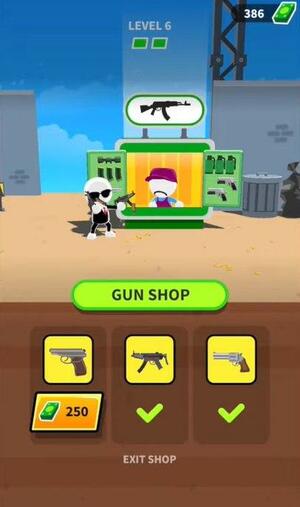 Every few levels you will meet with bosses. They differ markedly from ordinary opponents in both appearance and number of health points. During a meeting with the boss, a health bar appears on the screen, which you need to empty out with accurate hits to the enemy’s body. Keep in mind that killing a boss requires not one well-aimed headshot, but a whole series of hits. Notably, you also need to dodge enemy bullets.

Graphics in Johnny Trigger doesn’t promise to impress every gamer, but it pleases the eye. However, this is more than enough for a game that positions itself as a time killer. In fact, you find yourself in a cartoon world with an almost complete lack of detail, where you just need to follow the red stripe and press the button in time. The sound in the game can boast with several bouncy soundtracks. In addition, the developers clearly did their best on the sound acting of battle. You will hear all the shots and explosions in detail. In total, these characteristics are enough to immerse yourself in the gameplay. 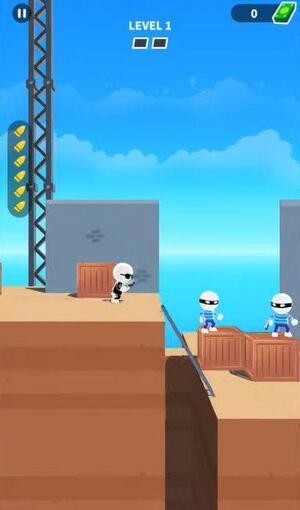 Despite the fact that for each level passed your character receives a reward, you may have problems with a lack of money. Eventually you will want to buy a new skin or machine gun, but they are very expensive here. As a result, you have to either save up money for your purposes or constantly watch ads.

In order to save you from unnecessary problems, we suggest you download a mod for Johnny Trigger that can provide you with unlimited money. You can spend all this wealth without a twinge of conscience on any quirks. Use money to create the most powerful and dangerous agent in the world.

We tested the mod for unlimited money on our devices. The results showed that all the stated features work flawlessly. Immediately after the first launch, you receive riches that you can spend on weapons or skins for the main character. You don’t need to do any additional actions other than downloading the game from our website and installing it on your Android device.

The gameplay of Johnny Trigger is as simple as possible. Go through the levels, one by one. In order to gain access to the next stage, you have to complete the current one without fail. At the same time, you won’t have restrictions on the number of lives or energy scale. Try as much as you want, the main thing is to destroy all the enemies. 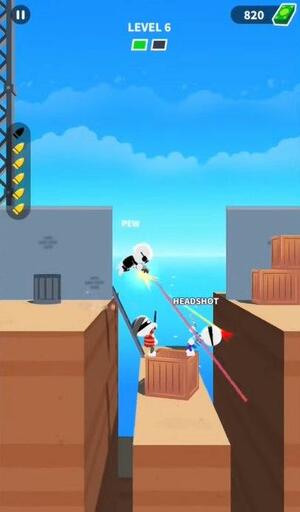 Your character moves around the map on its own, you just have to wait for the right moment to shoot. Just for this case, your weapon is equipped with a laser pointer, so aiming is easy. Hitting an enemy in the head is a headshot, so you can kill regular opponents with one shot. Everything is a little more complicated with bosses, because they have an increased amount of health. Therefore, you have to shoot several times.

Johnny Trigger allows players to not shoot always exactly at enemies. Sometimes it is easier to destroy them using various objects in the location: shoot at fuel tanks, interrupt the cables and drop heavy objects on their heads. Developers have prepared a convenient slow motion system to simplify the gameplay. When you reach a point where you have to shoot, the picture slows down, giving you time to aim at the exact head or target.

Johnny Trigger is a pleasure to play application with varied levels, high quality graphics and easy controls. The gameplay is as dynamic and effective as possible. Hundreds of opponents await you, including bosses and their henchmen. Use the items on the levels to destroy several targets at once and get more money, as well as points.

Try to go through over 1000 levels with a huge arsenal of weapons, which you can buy and even receive as a gift for participating in different events. In addition, customize your main character, put on cool skins and repaint your ammunition. However, if you want to try other interesting games, then be sure to play BTS Universe Story.

How to Install Johnny Trigger Mod?

Don’t forget to delete the original version of Johnny Trigger before installing our modified version to prevent errors during installation process.