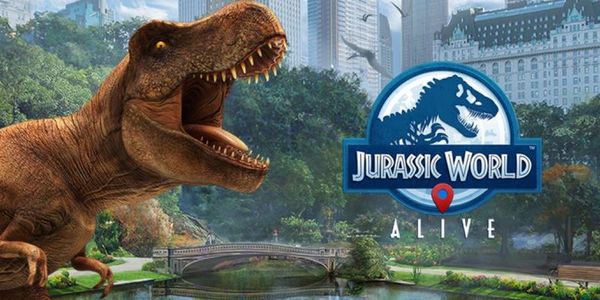 Jurassic World Alive is an entertaining simulator dedicated to hunting and breeding dinosaurs. Get unique opportunity to engage in both hunting and genetics, breeding the most ancient and most powerful creatures on Earth. Your main task is to find and catch all kinds of reptiles, tame them, and then take your pets to the arena to fight other dinosaurs. If you like dinosaur theme, then download this app to your android device. Exciting battles and many types of dinosaurs, which differ in rarity and strength, are waiting for you. In addition, we recommend other exciting dinosaur games – ARK: Survival Evolved and Jurassic World: The Game.

Read on and find out about the main features of Jurassic World Alive from our review.

It all starts with the fact that you need to search for creatures using GPS, moving around the map. When you see the dinosaur, take over the drone, which shoots arrows with sleeping pills. Depending on the size of the reptile, you need to spend a certain amount of substance to get it to sleep. Then you can collect DNA samples and use them to breed the same one in your laboratory.

Add rare dinosaurs to your collection

There are several types of dinosaurs in Jurassic World Alive – common, rare, and legendary. It is clear that the usual are the most common. Of course, there is an opportunity to collect animals. You need to find new species by investigating the desired animal on the map to add him in your list of open creatures. However, in order to add it to the collection and be able to use it later, you need to knock out the minimum number of points when fighting with it. Initially, this requires fifty units of material. The level-up process goes exactly the same way, by finding the required amount of DNA in battles. Over time, you will be able to breed dinosaurs, creating new species that have their pros and cons based on the parental genes.

Create unique hybrids in your laboratory

In addition to collecting existing species, you can breed completely new dinosaurs by crossing two DNAs from different creatures. Thus, you can discover new types of dinosaurs with its own characteristics and abilities. All this adds even more variability to the gameplay and allows the user to collect the unique collection of epic dinosaurs.

Fight with your pets in the arena

In order to access the arena in Jurassic World Alive, you need to collect at least four types of creatures in the collection. That’s exactly how much a standard combat squad can accommodate. By selecting corresponding menu item, you can get to a location where three different fighters take turns against your dinosaurs. By defeating one, you move on to the next and so on. The battle itself is an alternate exchange of blows between dinosaurs. The power of the blow and the damage done depend on the type and level of the animal. Naturally, under such conditions, eventually your fighter will inevitably get tired – in this case, you can always replace him. In addition, in battles, you need to take into account and correctly use the individual characteristics of each individual.

The graphics in Jurassic World Alive are very high quality. All dinosaurs in the game are perfectly detailed and drawn. Reproducing reptilian sounds is also amazing, allowing you to immerse yourself in the Jurassic world even more. We should note that the game is quite demanding on android devices – keep this in mind before installing.

All your actions in Jurassic World Alive require energy, whether it’s looking for a new dinosaur or fighting in the arena with an enemy team. Since the energy often runs out, the player has to pause or pay their money for its quick recovery. However, we suggest you take advantage of the unlimited energy mod, thanks to which you can enjoy the game as long as you want.

We have tested Jurassic World Alive for our website users. Based on the results, we can confirm the correct and safe operation of the mod for unlimited energy. Just install the game on your device and receive an infinite amount of energy in your asset immediately after the first launch.

The hunting process is as follows. Having found the target, switch to the shelling mode. Just click on it and find a sight. Move it to get to the specified point. This point is constantly moving, but you only need to shoot at its center – other shots count as misses. The closer you get to the center of the target marked on the dinosaur’s body, the more DNA units you get. In case of hitting directly into the center, the player receives the maximum reward. The number of arrows used for hunting in Jurassic World Alive is limited. Try to aim as accurately as possible – sometimes there may not be a second chance to hit the prey. So take your time – it is better to miss the target, but save precious charges.

This whole process lasts a certain, limited time, so you can’t hesitate. Regardless of the number of your hits or misses, lizard disappears from the map after you end shooting. Therefore, you have to look for a new victim. If everything went well, the reptile will go to your collection. Subsequently, you can upgrade it, create new types of dinosaurs by crossing them and participate in battles in the arena.

Jurassic World Alive is an excellent hunting and fighting simulator, made in the best traditions of the legendary Jurassic Park. If you dreamed of becoming a real dinosaur lord, then this game is definitely for you.

Delete the original version of Jurassic World Alive before installing our modified version to prevent errors during installation.